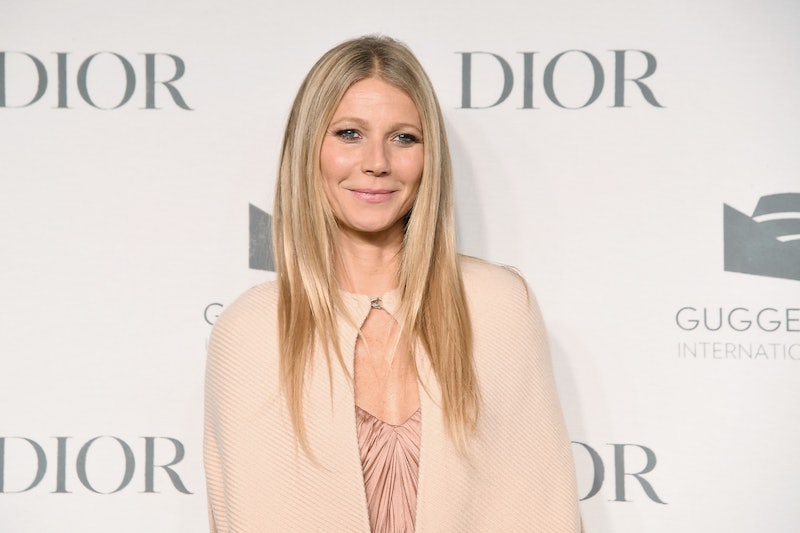 There are few things quite as admirable as a graceful partnership between exes, especially when there are children involved. Gwyneth Paltrow's birthday message to Chris Martin shows just how committed these two are to supporting each other even though they're no longer married. The exes were married for 13 years and divorced in 2016. They share two children, daughter Apple, 14, and son Moses, 12, and despite the end of their marriage, they remain a happy family. Paltrow's recent Instagram post celebrating Martin's birthday proves that. Not every person would happily wish their ex a happy birthday so publicly, that's for sure.

"Happy Birthday CAJM. This is a special one," she captioned a selfie of the two of them. "We love you so much. #42" Martin turned 42 on March 2, and ironically enough, the wall behind them in Paltrow's photo boasts the same number.

Paltrow's photo received hundreds of comments admiring their dedication to respectful and balanced co-parenting. Their daughter Apple even commented on the photo to join her mother in spreading the love. "Best parents on earth," she wrote. "I love u pops." How sweet is that? The 14-year-old probably posted her own father appreciation photo, but her account is set to private.

According to TMZ, Paltrow didn't just post a pic to celebrate. She attended Martin's birthday party at his Malibu home alongside other celeb attendees like Julia Roberts, Sean Penn, and Shameless star Jeremy Allen White. The outlet also reported that Melanie Griffith, the mother of his current girlfriend Dakota Johnson, was there.

The day before Paltrow's post dedicated to Martin, she shared one dedicated to her husband Brad Falchuk's birthday. Funny enough, she married two men who were born in early March. She and Falchuk got engaged in November 2017, per Us Weekly, and were married at her East Hampton abode in September 2018. Falchuk is a TV writer best known for co-creating Glee and working on American Horror Story with Ryan Murphy.

"It's your birthday, but it's really feels like you are the gift," 46-year-old Paltrow wrote. "Not just to me, and to @izzyfalchuk and Brody, but to all of us who are fortunate enough to know and love you. You are my rock, my true north, my favorite person to eat with, to travel with. You are a true friend. You want only what is for the highest good. You always help me see what I can't. I am so happy you were born @bradfalchuk I love you so much." Izzy and Brody Falchuk are Brad's children from a previous marriage. A source told Us Weekly that they get along well with Paltrow and her two kids — that they "have blended their families in such a great way," and "the kids all really are liking each other."

And, believe it or not, Paltrow's doting post to her husband wasn't her last birthday shout out of the week. She also shared a post of appreciation for her "dance partner," Tracy Anderson's birthday, on Sunday. It's relationships like Paltrow's that remind us that with dedication, respect, and proper communication, true love can exist despite any circumstance or past relationship, which is a reminder that's always welcome.

More like this
Kanye West Apologizes To Kim K "For Any Stress I Have Caused" In Rare Interview
By Jake Viswanath
Dan Levy Appears In The Latest Teaser For The Weeknd's HBO Series, 'The Idol'
By Jake Viswanath
Everything To Know About Taylor Swift’s 10th Studio Album, 'Midnights'
By Grace Wehniainen and Jake Viswanath
Kesha Is Down To Be The Next Bachelorette
By Jake Viswanath
Get Even More From Bustle — Sign Up For The Newsletter