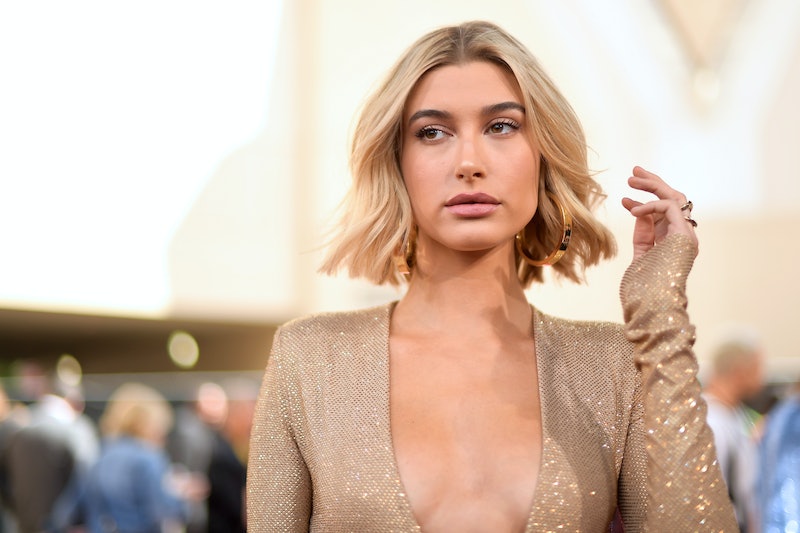 Hailey Baldwin and Justin Bieber had quite an eventful weekend. On Thursday, the two celebrated Baldwin's birthday in addition to Thanksgiving, surrounded by both of their families. On Friday, Bieber confirmed all those marriage rumors on social media. And, on Saturday, Hailey Baldwin rocked her brand-new 'Bieber' necklace — a birthday gift from her hubby, it would seem — in a video shared to her Instagram Story, according to People's Sunday report.

After taking a quick gander at Baldwin's sparkly new accessory (per People, it's a diamond necklace), it's clear this gift was a particularly special one. In glittery, bold lettering, the necklace bears the models newly-adopted surname: Bieber. She captioned the Instagram video with two heart-eyes and one gift emoji, suggesting she received the necklace in honor of her 22nd birthday. Of course, as some fans might know already, Baldwin's gift seems like a celebration of more than just her birthday.

Trailing her name-change on Instagram earlier this month (the internet all but lost their minds when Baldwin switched her IG handle to @haileybieber, igniting a resurgence of the wedding rumors that cropped up back in September, following another report from People), Baldwin's man took to the social platform one day after Thanksgiving to tastefully confirm what fans had been hoping was already true. "Happy late thanksgiving to everyone," wrote Bieber, starting off a lengthy, gratitude-filled Instagram post shared to the platform Friday, Nov. 23.

His Thanksgiving-themed message, in its entirety, was about as sweet as could be. But it was the caption's second line that really caught the internet's attention. Why's that? Well, after lots of speculation, Bieber's IG post seemed to confirm what fans have been wondering about for months now. Yep, that's right folks: He and Baldwin are married. (Er, it's technically Mrs. Bieber now, right?) Continuing, Bieber's caption relayed the nuptial news — and chronicled what sounds like a very special holiday celebration with his new in-laws — in maybe the chillest, most heartwarming way possible:

"First thanksgiving as a married man, first time hosting thanksgiving. First time both sides of the family has come together. Relationships are hard and love isn't always easy but thank you Jesus for showing me how!"

Yep, these two are officially married, and Baldwin has the stunning bling to prove it.

Baldwin was markedly less verbose in her own Thanksgiving IG post last week, though her gratefulness shone through nonetheless. Captioning two back-to-back photos from the Baldwin-Bieber family gathering Bieber mentioned (which served as a part-Thanksgiving, part-birthday shindig), she wrote, "very thankful," beside a red heart emoji. To be honest, those photos pretty much speak for themselves.

So, uh, anyone else still swooning over Baldwin's new necklace? How about her new last name? As far as sweetness, style, and romance is concerned, it seems pretty safe to say these newlyweds are starting married life (publicly married life, anyway) off right. Here's hoping this isn't the last adorable update to come out of the couple's exceedingly adorable relationship as they settle into this exciting new chapter.