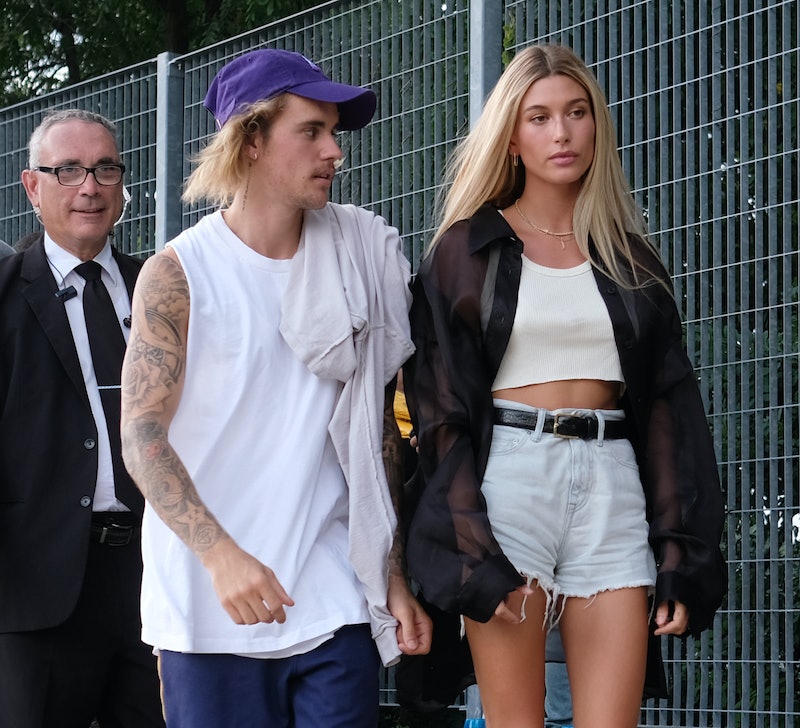 Baldwin posted a rather artsy, black and white photo of the couple in a sweet embrace and captioned it with, "I get to be his valentine forevaaa evaaa???? 😻😻" Seeing as though the two are married, as they confirmed on Instagram in November, they do indeed get to be each others' valentines "forevaaa evaaa," as she adorably put it.

Baldwin and Bieber have been in a whirlwind romance since June 2018, with the pair exchanging vows in September 2018 in a low-key courthouse ceremony in Manhattan. Ever since their relationship began, the couple has been pretty open about their decision to get married and how they make their marriage work. In a recent interview for Vogue's March issue, which was published in early February, they both got super honest about some of the hurdles that they've faced in their relationship and how they've managed to overcome those hurdles together.

Baldwin revealed in the interview that the couple's married life hasn't been entirely smooth sailing, as marriage is "really effing hard." Despite those struggles, they seem to be able to work through them together in a very healthy manner, which is really the most important thing. “It’s just that I’m fighting to do this the right way, to build a healthy relationship,” she told Vogue, "I want people to know that. We’re coming from a really genuine place."

Baldwin continued to tell the publication that the couple is committed to making their marriage work, no matter what. She explained:

"But we’re two young people who are learning as we go. I’m not going to sit here and lie and say it’s all a magical fantasy. It’s always going to be hard. It’s a choice. You don’t feel it every single day. You don’t wake up every day saying, ‘I’m absolutely so in love and you are perfect.’ That’s not what being married is. But there’s something beautiful about it anyway — about wanting to fight for something, commit to building with someone."

While Bieber and Baldwin, who are 24 and 22, respectively, are a relatively young married couple, they're determined to keep their relationship strong even though they may "change a lot" in the future, as the Drop the Mic host said, "we’re committed to growing together and supporting each other in those changes."

Even though they've only been married for a short time, they've already shown that they're totally supportive of one another. In particular, Baldwin has been a big support to Bieber, as he admitted that he's had previous struggles with sex and addiction, as he told Vogue. A source told Us Weekly, in an article published on Feb. 14, "He has anxiety and a lot of big issues that make it difficult for him to function on a daily basis. And he’s so reliant on Hailey." The insider also added that "she’s a tough cookie," and can handle being a big part of her husband's support system.

So, not only can Baldwin and Bieber depend on each other when it comes to any of the personal struggles that they've faced, but they can also trust that they'll be the main Valentines in each other's lives forever.