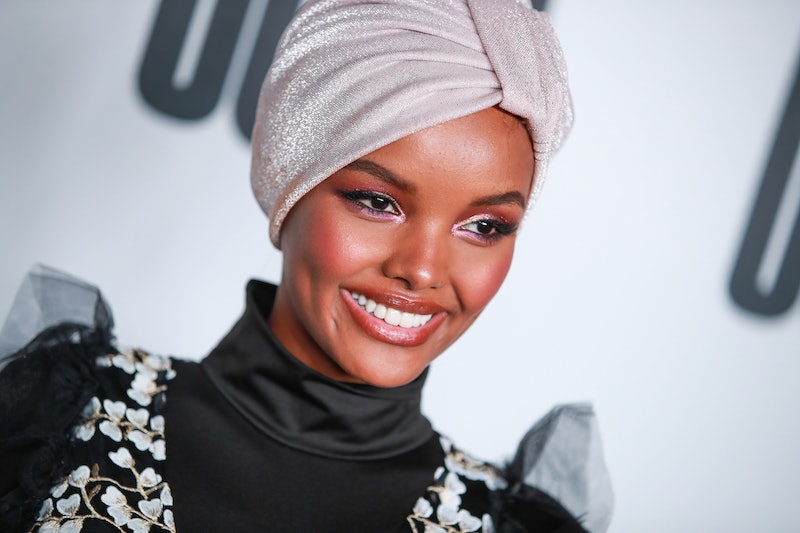 One magazine just made history by valuing inclusion. Halima Aden's Sports Illustrated cover is the first time a model in a burkini and hijab has been featured in SI's entire magazine history.

Aden grew up in Kenya's Kakuma Refugee Camp before immigrating to Minnesota at age seven, and she returned to Kenya to shoot the cover of SI. The shoot took place on Watamu Beach, and Aden took her trailblazing cover photos while wearing a bright blue burkini, a patterned caftan, and a teal hijab. The outfit was accessorized with long chandelier earrings that dangled to Aden's shoulders.

The model shared the cover photo on her Instagram, captioning the picture, "Don’t change yourself...Change the GAME!! Ladies anything is possible!!! Being in Sports Illustrated is so much bigger than me. It’s sending a message to my community and the world that women of all different backgrounds, looks, upbringings... can stand together and be celebrated."

“I keep thinking [back] to six-year-old me who, in this same country, was in a refugee camp,” Aden shared with SI during her shoot. “So to grow up to live the American dream [and] to come back to Kenya and shoot for SI in the most beautiful parts of Kenya — I don’t think that’s a story that anybody could make up.”

With Aden's trailblazing career — and more specifically, with her swimsuit cover — the model is proving that there is a place for modest Muslim women in the fashion industry. The SI Swimsuit editor, MJ Day, agreed.

“We bonded immediately over the idea of her participating in this year’s issue” Day told SI. “We both believe the ideal of beauty is so vast and subjective. We both know that women are so often perceived to be one way or one thing based on how they look or what they wear. Whether you feel your most beautiful and confident in a burkini or a bikini, YOU ARE WORTHY.”

Aden told SI that her main message to other women is to never be afraid to be the first. "Growing up in the United States, I never really felt represented because I never could flip through a magazine and see a girl who was wearing a hijab," Aden told SI.

Now with her game-changing SI cover, Aden has given girls and women the representation that she wasn't able to find while growing up. That's the power of not being afraid.