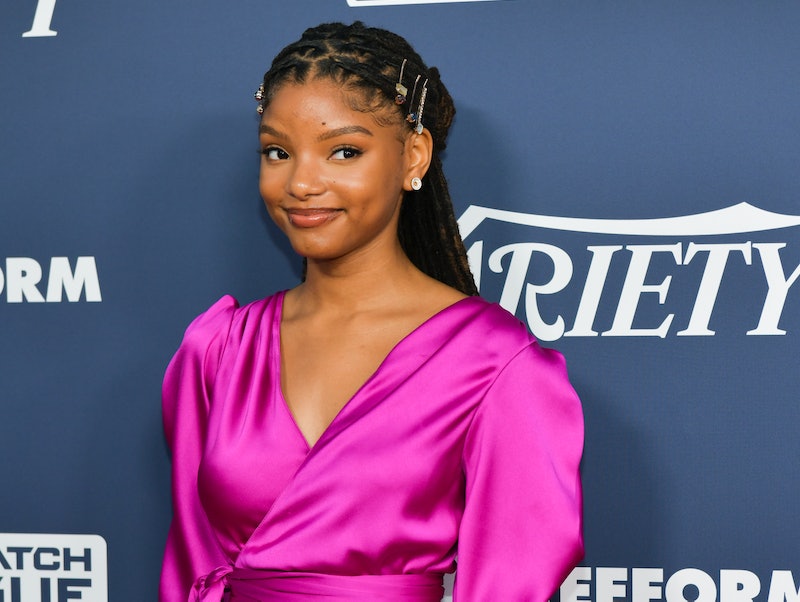 Disney is getting a new live action princess, and she's already behaving like a true queen. At Variety's Power of Young Hollywood gala on Tuesday, August 7, Halle Bailey responded to the Little Mermaid casting backlash in the most zen way possible, and revealed that she's simply focusing on living her dreams.

On July 3, Disney announced that Bailey will play Ariel in the upcoming live action adaptation of The Little Mermaid, and unfortunately, the Chloe x Halle singer received some backlash from fans who took issue with the idea of a black young woman playing Ariel. Despite the negative reaction from some fans, however, Bailey told Variety that she's simply focusing on bringing a legendary character to life, rather than worrying about others. "I feel like I'm dreaming and I'm just grateful and I don't pay attention to the negativity," she told the outlet.

Bailey also explained that she is aware of the kind of impact that her performance as Ariel can have on young girls of color everywhere. "I just feel like this role was something bigger than me and greater and it's going to be beautiful," Bailey said. "I'm just so excited to be a part of it."

Despite her positive outlook on the career-changing opportunity, Bailey did admit that there is one thing about playing Ariel that she has been nervous about: Stepping into the spotlight without her sister, Chloe, by her side. "It is definitely a little bit nerve-racking because I am the little sister," Bailey told Variety. "I am so used to [us] always going through these challenging moments in our career together, [but] I am beginning to understand that this film is so much bigger than me."

Bailey isn't the only person who understands the kind of impact that her version of Ariel will have on children everywhere. In July, the first woman of color to play Ariel onstage, Diana Huey shared her support for Bailey's Little Mermaid casting in an interview with TheWrap. "Keep your head up and know than it’s so much bigger than you as a single person fighting these battles," Huey told the outlet of the advice she had for Bailey. “If she can stay positive and just remember, there’s more support than there is hatred. It’s an important battle to fight and she’s not alone."

In response to Disney's casting announcement, Huey reposted Bailey's image of a brown-skinned, dark-haired Ariel on Instagram, and wrote her own message of support. "Isn’t Ariel’s entire message about finding where she belongs, where she is her truest self, and where she feels full and accepted?" Huey wrote. "Halle is going to make a beautiful Ariel, a powerful Ariel and an inspiring Ariel and I am so excited to watch her change the world with her performance as she helps continue to make our world a more loving, inclusive and open-minded place."

Jodi Benson, who voiced Ariel in the original Disney animated film, also shared her support of Bailey at the pop culture convention Florida Supercon in July. "I think the most important thing is to tell the story," Benson said. "I think that the spirit of a character is what really matters. What you bring to the table in a character as far as their heart and their spirit is what really counts."

While it's unfortunate that Bailey's monumental casting announcement was overshadowed by backlash, it's clear that the singer and actor isn't letting the negativity stop her from enjoying seeing her "dream come true." Bailey's Ariel will do doubt make a major impact on young fans of color everywhere, and it seems as if she's already teaching us all how to behave like a Disney princess in real life.

More like this
The 'Scream 6' Trailer Shows Off Hayden Panettiere's Return & Ghostface In NYC
By Jack Irvin and Jake Viswanath
'Friends' Star Maggie Wheeler Offers Support To Matthew Perry After Reading His Memoir
By Alyssa Lapid
A New 'And Just Like That' Table Read Pic Confirms A Key Character's Return
By Jack Irvin and Grace Wehniainen
Anne Hathaway Shared A "Thrilling" 'Princess Diaries 3' Update
By Darshita Goyal
Get Even More From Bustle — Sign Up For The Newsletter
From hair trends to relationship advice, our daily newsletter has everything you need to sound like a person who’s on TikTok, even if you aren’t.