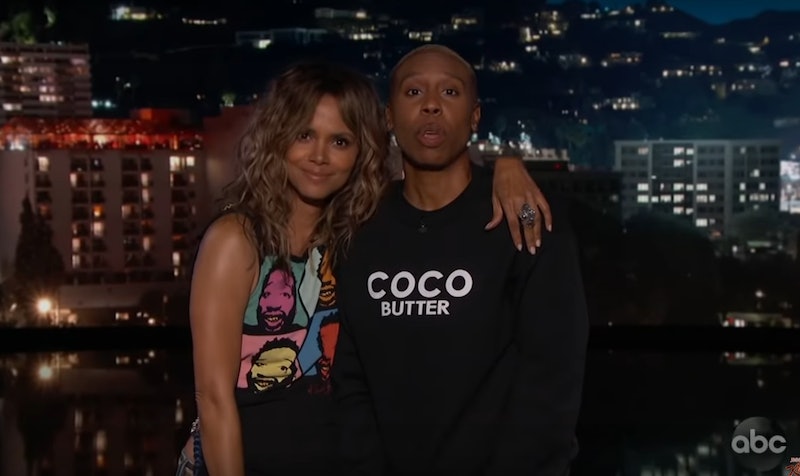 So, you know how late-night talk show hosts will have a celebrity guest host step in from time to time? It kind of seems like an intimidating gig, given the live audience aspect. Well, on May 22, Halle Berry gave Jimmy Kimmel Live! guest host Lena Waithe the ultimate pep talk to ease her nerves, as Entertainment Weekly reported. She didn't *just* give her a pep talk, though — she sealed it with a big ol' kiss.

Waithe breezed through the first few minutes of her opening monologue, but paused at one point to ask Guillermo the security guard if he had any advice for her. "Just be yourself and don't let that son of a b*tch Matt Damon on the show," he told her, jokingly alluding to Damon and Kimmel's longstanding faux-feud.

"Fair enough," Waithe replied. "But look, I'll be honest — I'm feeling a little nervous," she admitted. "Like, I could use some words of encouragement or something."

Guillermo then motioned towards the back of the set and suggested that they push the "Berry Button" — a large, red button with "Berry" written on it. "You push it when you need something berry important," he told the host. Get it?

"I need some inspiration, OK?" Waithe begged Berry. "Like that Oscars speech you gave [in 2002], it got me hyped, OK? I need you to give me some of that Halle Berry juice!"

Berry snapped her fingers to bring down the lights, and encouragingly told the guest host,

"Lena, you know I know you, right? We've worked together. So, I know that you are a force of nature. You are a beautiful African-American queen going after everything that is hers! And, Lena, tonight you are a writer, an actor, a producer, and tonight you are a late-night comedian and you’re about to slay! And you're already winning, girl, because you're dressed way better than Jimmy [Kimmel] ever was."

Not bad, right? The Berry Button is where it's at. Waithe definitely seemed more at ease after being on the receiving end of that motivational speech. Berry, however, thought that she still need a little "something else."

A pat on the back, perhaps? A big ol' bear hug? How about a high five, or a good luck charm, or a few more positive parting words? Ah, no. None of the above. Berry took Waithe's face in her hands and planted a Blockbuster-worthy smooch on her lips. "Now, you're good," Berry exclaimed.

*Gulp* Waithe regained her composure after the kiss pretty quickly, but definitely still looked floored. Not that anyone would blame her, of course. And you know what? She was good, so maybe we all need a Berry Button in our lives.