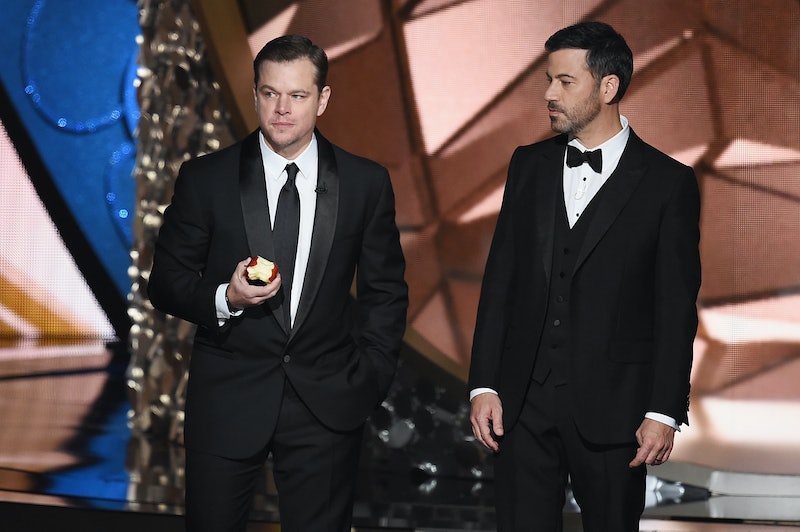 For as long as I can remember, Jimmy Kimmel and Matt Damon have been in a feud. Or, I should say, "feud," since it's really more in good fun than an actual fight. It almost feels as though this thing between them has no beginning, it's just always existed. But, the history of Kimmel and Damon's "rivalry" is actually quite fascinating. And, it also shows no signs of going away, especially after Kimmel continued things during a pre-Oscars interview with E! "I will do my best to ruin [Damon's] evening any way I can," he joked, after saying that the movie that made him cry the most this year was The Great Wall — you know, because of all the screen time Damon got. "It's hard to sit through," the host lamented.

As for where it all started, you'll have to go back 11 years, according to Time. The outlet wrote a long article on the history of their fight, and describes the initial moment as such:

It all began during the third season of Jimmy Kimmel Live! when the host off-handedly ended a discouraging show by apologizing to Damon for bumping him from the episode. After the joke got a laugh from one of his producers, he started doing it every night.

As Time noted, Kimmel told NPR years later that choosing Damon for the joke was really not something he thought through at the time. He said,

"Matt Damon was just the first name that popped into my head. I was trying to think of an A-list star, and somebody we absolutely would not bump if he was on the show. ... The legs on this bit are unbelievable to me. I mean, people laugh every time I say it. ... Repeating the same joke every single night, you'd think eventually people would get tired of it, but they don't."

From there, things escalated with both parties playing along. You can even see a staged fight between the two in the below video during Damon's 2006 appearance on the show.

Both stars have had a lot of fun with their fake feud over the years, and it's nice that Damon can take it all in stride and laugh at himself. The pair even took the drama to the Emmys in 2016, when Kimmel hosted and Damon showed up on stage eating an apple to mock Kimmel for losing out on his Emmys category.

It will be interesting to see if Kimmel does anything to Damon when he hosts the Oscars... or if Kimmel ends up running out of time — apologies to Matt Damon.