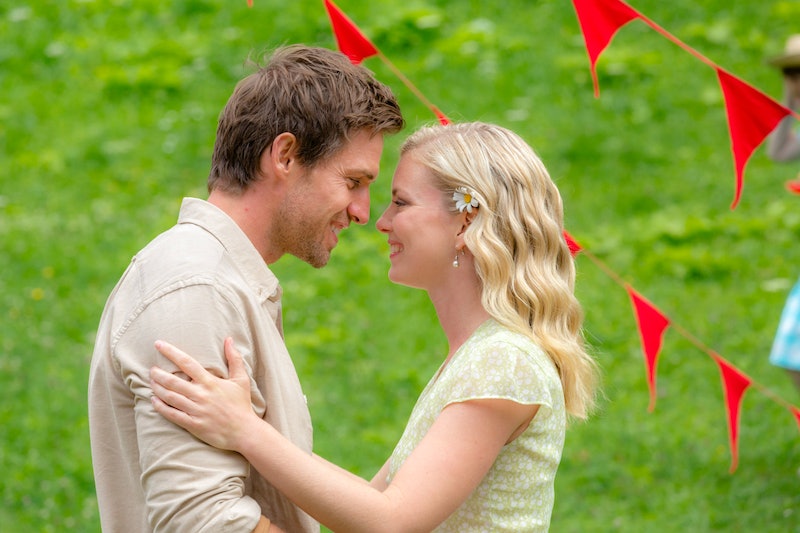 Christmas has long gone, and thus so has the season for Netflix's A Christmas Prince. But fear not, made-for-TV movie lovers, for a new romance movie is here, and it will knock your socks off. Hallmark's Royal Hearts is the romantic TV movie to watch if you loved A Christmas Prince, but wished it had more Montana in it. The Hallmark Channel Original Movie premieres on Saturday, Feb. 24, and based on the adorable dog in the poster, it's already got one up on A Christmas Prince.

Like A Christmas Prince, Royal Hearts is a fish-out-of-water story about a regular, American girl, plucked from obscurity and thrust into the life of a small royal family. Naturally, considering it's February release date, Royal Hearts doesn't take place over Christmas, but that's not the only major difference between the two films. This time around, instead of being lucky enough to fall in love with a prince, it's the heroine, Kelly Pavlik, who's the royalty.

In Royal Hearts, Kelly, a hopeless romantic from Montana, finds out her rancher father, Hank, actually a descendant of the royal family of Merania, a small kingdom. Together, the two travel to Merania with the intention of rejecting the throne, but end up staying once they find out that the neighboring Kingdom, Angosia, is threatening to take over the country.

Hank, as played by James Brolin, who also directed the film, isn't your traditional king. A Montana rancher at heart, he doesn't take too kindly to the traditions of Merania, so he mixes in a few of his own. This includes a political debate on taxes (yes, really), a cowboy hat in lieu of a crown, and a fondness for working the land of his new royal estate.

Oh, and he rocks an excellent Canadian tuxedo.

Nothing says Royal TV Movie quite like a man in head-to-toe denim walking into his throne room.

Bummed A Christmas Prince didn't have enough of a legitimate love triangle? Well, then get ready because Royal Hearts has a classic princess torn between two lovers scenario. One, a commoner, the other, a neighboring prince. It's the classic, everyday story of a girl who finds out she's a princess of a small country, and falls in love with a prince and a stable hand.

A Hot Guy With Sheep

The stable hand, Alex, is described in the movie's official synopsis as "a good-looking country boy," and, as fans can see from the trailer, this is, indeed, true. What the synopsis doesn't say is that he's not just a hot stable boy, he's a hot stable boy — with sheep. (Seriously, the movie actually contains the line, "Alex was telling me he'd like to increase the number of sheep.") Any man who can cradle a little lamb in his arms like Alex is deserving of all the love in the world. If the plot of Royal Hearts doesn't move you, let Alex, the hot guy with sheep, do it instead.

Sure, there's no snarky little sister or ridiculously unrealistic journalism notes, but who needs that when you have sheep, a debate about unfair taxes, and a cowboy hat?