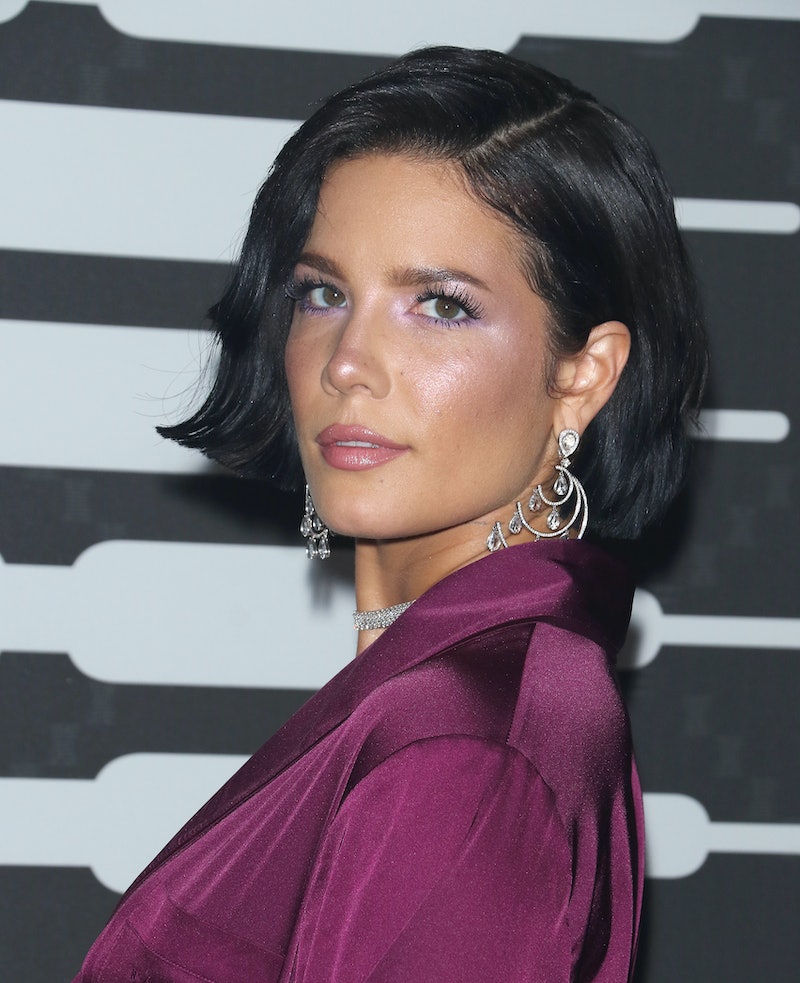 A few weeks back, Halsey and Evan Peters were first snapped holding hands on a rollercoaster, kicking off speculation that the two could be together. Now, more photos have surfaced of the pair out and about, hinting that the "rumors" about Halsey and Evan Peters dating might not actually be rumors after all. (Bustle reached out to reps for Halsey and Peters for comment, but has not yet heard back.)

On Wednesday, E! News published a photo of Halsey and Peters with their arms around each other in California. Although the E! pic was taken from behind, when compared to other shots that surfaced on Twitter the same day, it's clearly the two stars. In one of the photos from @HalseyInsider, Halsey affectionately has her hands around Peters' face as they both smile.

The "Without Me" singer and the former American Horror Story actor initially sparked dating rumors earlier this month, after the U.K.'s Daily Mail snapped them hanging out at Six Flags Magic Mountain. An onlooker told the outlet they were "laughing and flirting" while standing in line for a ride, and that their whole interaction "looked really romantic."

Prior to Peters, Halsey was very publicly dating British musician Yungblud. The two were a couple for close to a year, but reportedly split towards the end of September. As for Peters, he's pretty fresh from a split of his own. The actor was in an on-off relationship with his AHS co-star Emma Roberts for more than seven years. During that period, they got engaged, split, got back together, and got engaged again, but reportedly called it quits for good sometime around March.

Halsey has admittedly had a crush on Peters for a while (from afar, at least). The singer first thirst-tweeted about him back in 2012 while he was starring as Tate on AHS: Murder House. She'd then go on to tweet about him a lot over the next few years, and even though her tweets about Peters have since been deleted, one of her fans managed to screenshot them before that happened. Spoiler alert: In one, she said she wanted to "lick his whole body."

More like this
Michael B. Jordan Tackled His "Public Breakup" With Lori Harvey On 'SNL'
By Brad Witter
Joey Essex Is Rumoured To Be Dating A 'Love Island' Favourite
By Sam Ramsden
Who Is Pete Davidson Dating? He & Chase Sui Wonders Got Caught Kissing
By Jake Viswanath
Darren Harriott Is Keeping His Love Life Away From The Spotlight
By Darshita Goyal
Get Even More From Bustle — Sign Up For The Newsletter
From hair trends to relationship advice, our daily newsletter has everything you need to sound like a person who’s on TikTok, even if you aren’t.