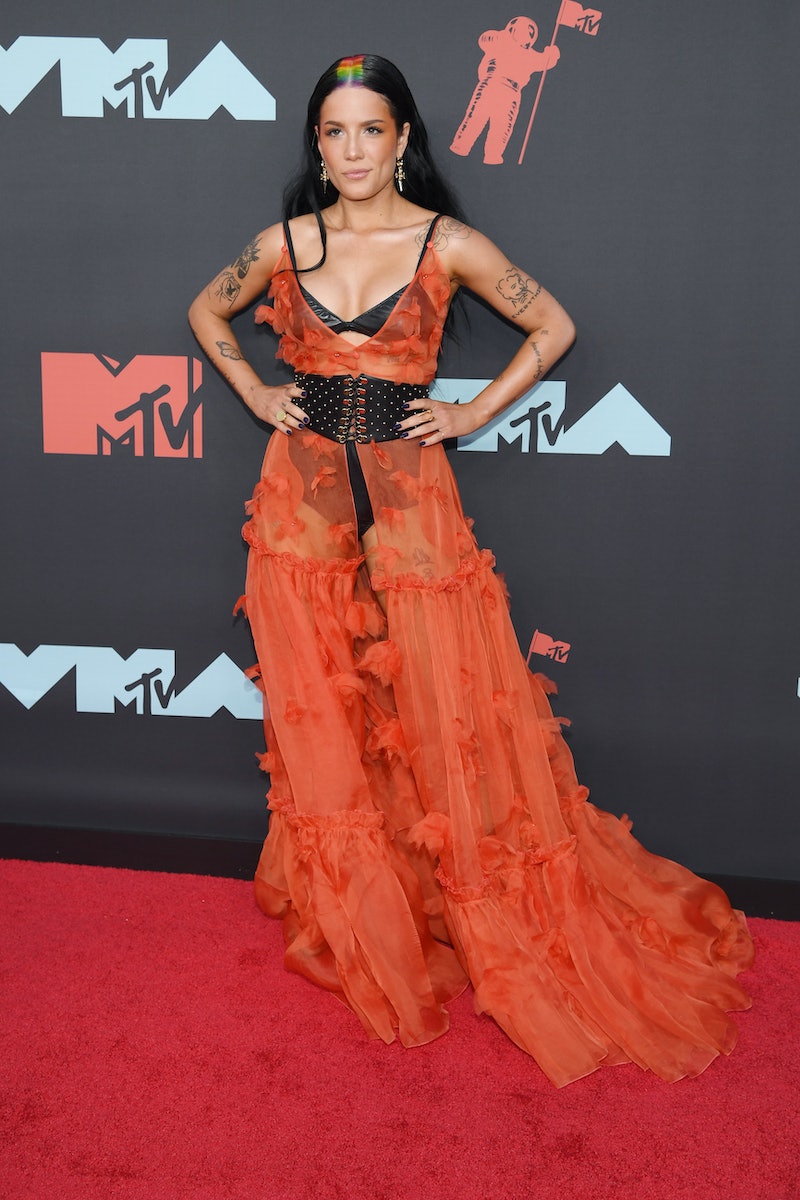 Halsey is known for her playful aesthetic, and that reputation held true on the red carpet tonight. Halsey's 2019 MTV VMA outfit was a mix between edgy and sweet, which is Halsey's usual go-to formula.

Halsey is nominated for six VMAs this year, including Artist of the Year and Best Video for Good (specifically for her 2019 song "Nightmare"). Halsey's red carpet style changes from event to event, so there was no telling what the artist would serve up for the VMAs. But her outfit didn't disappoint.

Halsey wore a sheer red dress by designer Peter Dundas, who dressed stars like Emily Ratajkowski, Gabrielle Union, and Ciara at the 2019 Met Gala. Halsey's dress had 3D flower petals going down its length, and underneath she simply wore a black bra and high waist underwear. The middle of the flowy dress was cinched with a black leather girdle belt. While the belt is "pure Halsey," the leather accent is something of a signature for Dundas. His 2019 collection featured an array of sheer maxi dresses cinched with thick leather corset belts, and black bras peeking out from low cut necklines.

"I'm always kind of naked, kind of classy," Halsey joked on the VMA red carpet. The artist embraced the underwear-as-outerwear look, and made sure her bottoms weren't hidden on the red carpet.

While her outfit was dreamy, Halsey's hair was the true star of the show. Halsey wore a rainbow middle part in her hair, which shimmered as it caught the light. It added a pop of technicolor to her red and black red carpet look.

To give you an idea how this look differed from Halsey's other 2019 red carpet outfits, below is a quick rundown of her biggest award ceremony looks.

At the 2019 Billboard Music Awards, Halsey channeled a goth princess look that was equal parts edgy and glamorous. She wore an indigo blue dress with a thigh high slit and a low-cut bustier top. The dress was divided with sheer lace paneling that added a romantic touch to the outfit. Halsey then matched her lipstick to the color scheme of the dress, wearing a dark blue lip shade.

In June 2019, Halsey decided to go a different route for the MTV MIAW Awards in Mexico City, Mexico. According to Halsey, she felt like an "emo Barbie" on the red carpet, and couldn't stop sharing photos onto her Instagram. Halsey's mini dress was a custom gown made by Redemption, which was complete with crystal beading and a ruffled skirt cape. The dress had a plunging neckline and had a halter silhouette. To finish off the look, Halsey's hair was swept up into a high ponytail that Ariana Grande herself would be proud of.

In March 2019, Halsey attended the iHeartRadio Music Awards sporting a much different look. The singer wore a menswear-inspired outfit, sporting a tuxedo shirt with a peplum waist, a bow tie, black cigarette pants, and high heels. To balance the buttoned-up look, Halsey wore her hair pink with loose curls framing her face.

To shake up things even further, Halsey stepped into another wild card outfit for the 2019 Vanity Fair Oscar Party. For the event, the singer wore a Jessica Rabbit-inspired bright red wig styled into Old Hollywood waves. Her dress was a tartan mini dress with a long train in the back, complete with an off the shoulder neckline. The dress had a black lace overlay for some edge, adding a goth-like touch. Halsey's makeup was also unique, with the singer opting for a bright green eyeliner underneath her eyes.

Halsey's red carpet outfits are always a pleasure to look out for, and her MTV VMA look did not disappoint.