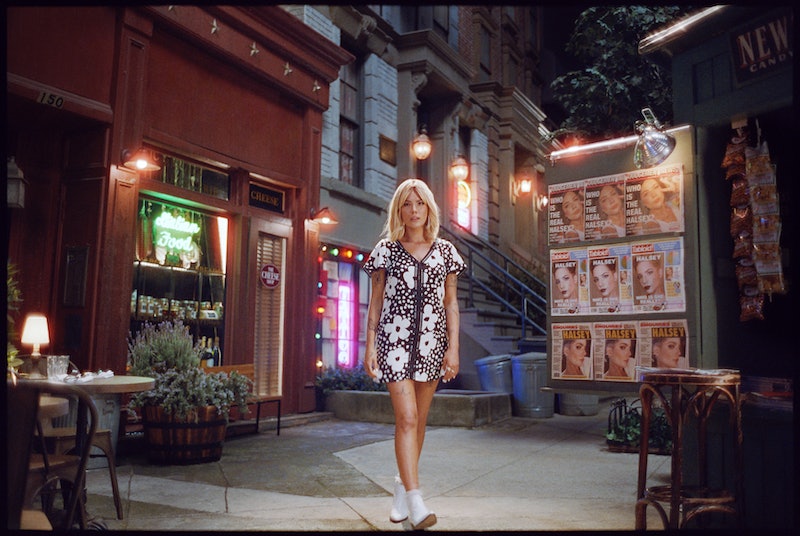 ModCloth wants its shoppers to celebrate their DNA-distinct style in every way. The company has launched a new campaign featuring women in entertainment who do things their own way when it comes to their art, fashion, and life. Halsey appears in ModCloth's "Against the Current" campaign, along with actor and rapper Awkwafina, actor Dascha Polanco, and model Hari Nef. The imagery calls attention to their inner strength and capacity for self-expression, and it lands in conjunction with International Woman's Day on March 8.

In the inspirational campaign, each woman literally battles the natural elements of earth, wind, water, and fire. They face obstacles head on — all while looking fabulous.

"With so much happening in our world, ModCloth wants to empower women everywhere to live authentically, even in the face of difficulties, because that self-confidence and boldness is ultimately what helps us all triumph," said Lizz Wasserman, Vice President of Fashion and Concept at ModCloth, in a press release received by Bustle.

For New Jersey native Halsey, participating in this campaign and partnering with ModCloth was a no-brainer.

"I really admire a brand that celebrates individuality," the singer tells Bustle exclusively via email about her connection to ModCloth and her co-stars. "All the women involved are so unique and inspiring in their own ways."

Halsey embodies the ethos of the campaign since she goes against the current in her personal style by ignoring others and staying true to herself. She does as she pleases and isn't afraid to experiment with her look, thus avoiding any fashion ruts. Her look is never predictable, and that's what makes her one-to-watch on red carpets and beyond.

"I try not to pay attention to what's expected of me," she says. "I change my hair, my style, and my vibe with whatever is inspiring me in that current moment. I don't feel married to one particular look."

On the professional front, Halsey puts in the requisite work to confront and conquer life's daily challenges, which includes incredibly vocal online trolls. In these situations, Halsey tries to take the high road while still doing her thing.

"The negative voices are always the loudest," the singer shares. "It can be hard to ignore negative comments when your life and career center around using your own vulnerability to motivate others."

Halsey reveals that "it can be difficult to not fall victim to routine" in work and in life. To combat any same-ness and to remain inspired, she's "always thinking outside the box." Ultimately, Halsey's art impacts her style and the opposite is also true.

"I interpret music in more than just the way I hear it," she explains. "When I'm making an album, I see it in all different colors, images, and emotions. I take how my music makes me feel and dress like whoever that person is."

Halsey's fashion choices have been so delightfully daring throughout her career — from the time she work silk pajamas to the 2017 Grammys to her mermaid blue locks to her buzz cut. She does have one simple sartorial suggestion for fans when putting together an OOTD though.

"Before you leave the house, take one thing off," she says. There you have it — a fashion tip from Halsey.

The ModCloth campaign also includes a short documentary featuring the four stars outlining lessons they've learned while catching the curveballs that life has thrown their way. It will be available for viewing at the ModCloth site on March 10.

For now, you can marvel at the photos of the stars who appear in the campaign. Fans can also shop each celebrity's ModCloth favorites and personal picks on the site.

Halsey, Awkwafina, Polanco, Nef, and ModCloth have come together to demonstrate their individual strength of heart, mind, style, and life in this campaign. Their efforts can certainly inspire you to live against the current, too.