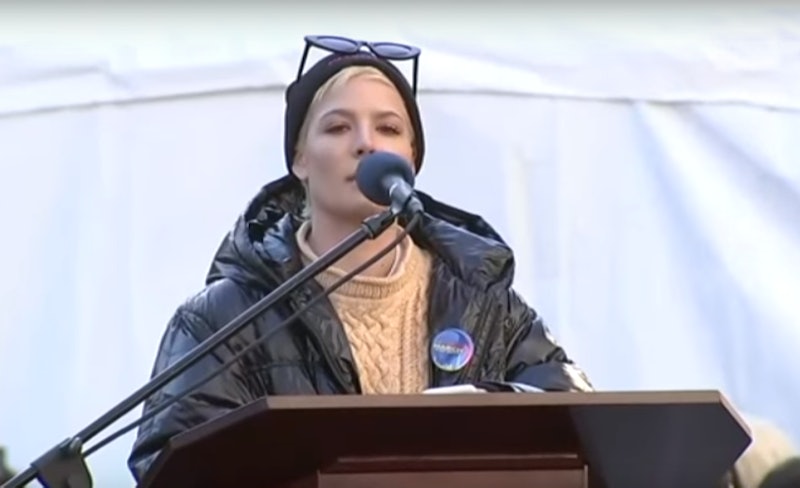 While women and men gathered across the country for the 2018 Women’s March on Saturday, this year’s rallies were markedly different, thanks to the #MeToo and Time's Up movements. Nowhere was that more apparent than in the poem Halsey read at the 2018 Women's March. (Note: Readers should be aware that the video of Halsey reading her poem frankly discusses rape, sexual assault, and miscarriage, and may be triggering for some people.)

The 23-year-old singer took the stage at the New York City rally, where she told the crowd that she had written a poem because she "doesn't know how to do a speech unless it rhymes." What followed was an aching trip through Halsey's life and the sexual traumas she has experienced or witnessed along the way. Halsey's poem, "A Story Like Mine," begins with her recounting a story of being a scared 14-year-old sitting with her best friend, Sam, in a Planned Parenthood after her friend was raped. The singer remembers waiting for her friend's pregnancy test results to come back, and fielding a call from her mom, who she couldn't tell where she was.

It's a searing start to a poem that is essentially a series of #MeToo stories that are a heartbreaking reminder that many people don't have a single experience that has left them scarred, but rather a lifetime of them. What's particularly striking is how none of Halsey's stories are exactly the same — the experiences she's been through range from sexual coercion to assault, and as each one unfolds, the listener feels the full weight of what the singer has been through in her young life.

Halsey moves back in time from the Planned Parenthood to 2002, when a neighbor promised to teach her how to play the guitar as long as she stayed quiet. "I'm too young to know why it aches in my thighs, but I must lie, I must lie," she recalled.

The poem in its entirety is difficult to listen to, but it's also a visceral reminder of why the #MeToo movement matters so much. Halsey stood before a crowd in New York City and she bared her soul. What's remarkable is that there is now an environment where Halsey, and so many other people who have been through similar experiences, feel safe in speaking out. It wasn't that long ago that discussing sexual assault and harassment was seen as taboo, but in recent months, people have become emboldened to come forward and not only reclaim their power, but take a stand and say this cycle of abuse has to end.

Halsey's poem isn't just about the pain she's experienced, it's also about anger, and the ways in which people can harness those feelings to impact change. She said,

"What do you mean, this happened to me? I'm supposed to be safe now. I earned it. It's 2018, and I've realized that nobody is safe 'long as she is alive, and every friend that I know has a story like mine, and the world tells me we should take it as a compliment.

It's Olympians and a medical resident and not one f*cking word from the man who is president. It's about closed doors and secrets and legs and stilettos, from the Hollywood Hills to the projects and ghettos … Listen, and then yell at the top of your lungs. Be a voice for all those who have prisoner tongues."

The poem is brutal, but it's also deeply empowering. It's a battle cry, and Halsey is ready to lead the charge alongside all of the women who understand her pain — and the people willing to listen and learn from their stories.

Don't let anyone make you think for one second that the #MeToo movement has peaked or is coming to an end. Halsey's poem is a reminder that there's still so much work left to be done.