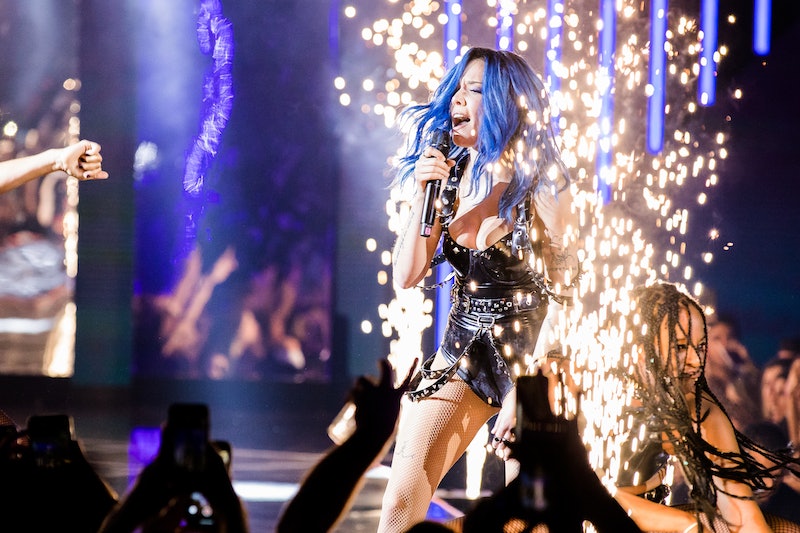 Celebrities and tattoos kind of go hand-in-hand with one another, especially since body art is no cheap expense. But with creative stars ideate creative tattoo designs, and Halsey’s “poor thing” tattoo is one of the funnier relatable ones to grace the internet in a while.

Halsey may have some sweet-sounding vocals to belt, but she’s no strangers to tattoos. The “Without Me” singer shared her latest addition to her scattered tattoos on Instagram with a picture of her kneecap covered in a black and white tattoo of two bandages crossed with the words “poor thing” written through the middle.

The singer also credited the fake boo boo art design to London-based tattoo artist Emily Malice, who posted a photo of herself and Halsey in the process of (according to Halsey’s face in the photo) the painful tattoo procedure.

"Ouchie!” Malice wrote. “Always a pleasure seeing you my babe. Thank you for getting tattooed by me.”

Malice is a professional with designing some cool pop art tattoo designs, and Halsey definitely approved of the outcome when she tweeted about her new body ink.

“Got my entire kneecap tattooed so now I’m officially not afraid of anything,” Halsey wrote.

It’s simple, sweet and very much a tattoo many of her fans will find humorous and relatable, because simply put, you’ve probably been here at some point when life (literally) knocks you down.

Fans flooded the singer's comments with their stamp of approval leaving heart emojis and compliments on the clever tattoo idea. Halsey hasn't explicitly explained the meaning behind the whimsical tattoo design, but it's definitely a crowd-pleaser even if there's no meaning behind it at all.

In fact, Halsey may not have a plan or meaning behind a lot of her tattoos. The performer's 2018 interview with NME.com explained that Halsey makes her tattoo decisions very last minute. At the time, the singer had been getting a black and white design of a daggar strapped around her ankle (which was also tattooed by Malice).

“To feel like a dangerous woman is a really powerful thing," Halsey said. The daggar was a reminder to herself to always stay armed and ready, but to keep her feminine side present in the florals on the strap. "I can be delicate and feminine if I want to,” Halsey said, “but I can also be really fucking dangerous – so don’t f*** with me!”

The knife around Halsey isn't the only sharp object on her body. Halsey's tough girl message rings even truer with the sword that sits on her right upper thigh with the number 13 on it that's rumored to be a tribute to one of the singer's late friends that she got when she was 16.

Life hands people lemons everyday, and it took something as simple as a tattoo design on a world-known singer's knee to remind fans that even the mightiest fall. However, a cool new tattoo can always brighten up your day.