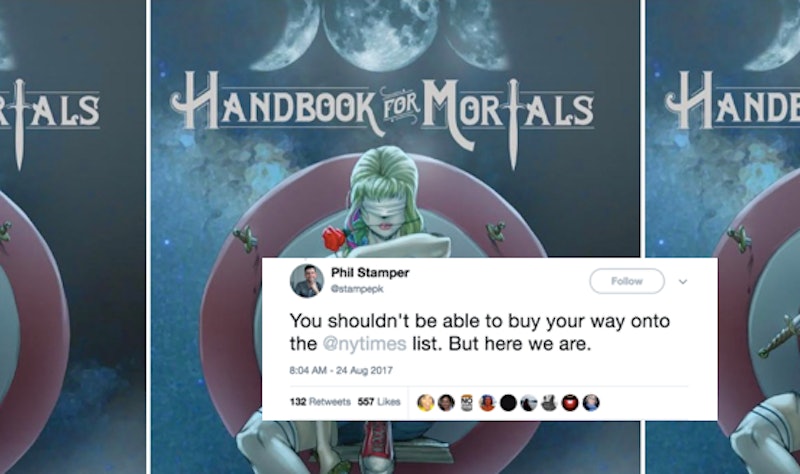 After 24 weeks on the New York Times Best Seller List for Young Adult Hardcover, Angie Thomas' The Hate U Give was knocked out of the No. 1 spot earlier this week, when the mysteriously unknown Handbook for Mortals took top honors instead. There was just one problem: Basically no one had ever heard of Handbook for Mortals before. Here's what you need to know about the New York Times' YA bestseller scandal and how YA Book Twitter uncovered it.

Earlier this month, Lani Sarem published her debut novel, Handbook for Mortals, as the inaugural title for GeekNation's new publishing wing. From the beginning, GeekNation and Sarem intended to turn Handbook for Mortals into a film franchise. When The Hollywood Reporter covered the book deal back in July, American Pie actor Thomas Ian Nichols was attached to produce and "likely" co-star in the series' first installment. The film's IMDB page states that Sarem will take on the role of her protagonist, Zade.

Now, it's not unheard of for young-adult novels to land film deals before they appear in print. The YA communities on Twitter and Instagram are quite active, and they generate fantastic hype for the books their members read and enjoy. But when Handbook for Mortals appeared on the New York Times Best Seller List, no one on YA Book Twitter — a large community of writers, publishers, editors, literary agents, and bloggers — had heard of it.

The subsequent investigation of Sarem's mysterious No. 1 hit began with Phil Stamper, an editor and the author of the Wattpad novel Crowded. When he spotted the unknown novel at the top of the NYT list, he did a little digging.

"A book that's out of stock on Amazon and is not currently in any physical B&N in the tri-state area," he tweeted. "A book that no one has heard of except for the two niche blogs that covered the GN press release. Sells ~5,000 in the first week? Ok."

Stamper was aided in his mission by Broadwayish manager, former book blogger, and editorial assistant Jeremy West, who signal-boosted the story, and call-outs for bookstore managers to come forward with any evidence that Handbook for Mortals had bought its way onto the NYT Best Seller List. West also investigated the book's sales connections to Wizard World Comic Con dates across the country.

But let's put a pin in that for a moment, so we can address the burning question you might have at this point: How does a book buy its way onto the Best Seller List? It's not as simple as you might think.

Back in 2015, then-GOP presidential candidate Ted Cruz published a memoir, A Time for Truth, which The New York Times subsequently declined to include on the Best Sellers List, because it claimed that someone had manipulated the book's sales numbers by placing bulk orders. Donald Trump's campaign allegedly did the same thing the next year, when it paid more than $55,000 for copies of his Crippled America: How to Make America Great Again.

What distinguishes those cases from Sarem's — aside from Cruz and Trump's political celebrity — is that the book orders were large enough to be noticed. This did not happen with Handbook for Mortals, which may explain why it flew in under the NYT s radar.

As Stamper and West discovered when booksellers began to reach out to them, bookstores across the country — from Barnes & Noble to local indie shops — had received strange phone calls asking if they reported their sales numbers to the newspaper, before placing orders for Sarem's debut that were just below what would qualify as a "corporate" order. That means that, from each book store, whomever was behind the Times-gaming ploy purchased no more than 29 or 79 books. Big-box stores like Barnes & Noble consider 30 books to be a corporate sale, and indie booksellers draw the line at 80 copies, according to pajiba.com.

The Handbook for Mortals story gets even shadier when you consider the fact that no one has a physical copy of Sarem's book. It's listed as "temporarily out of stock" on Amazon and Barnes & Noble, librarians reported to pajiba.com that they were unable to find it, and most of the excerpts posted online appear to be captured from an e-book copy. Stamper also tweeted that one Barnes & Noble seller told him that the store's orders for Handbook for Mortals "can be canceled, [because] they haven't been delivered." How strange, then, that Handbook for Mortals managed to generate more than 10,000 hardcover sales in its first week, without having a single, verifiable hardcover copy to show for it.

As a result of Stamper and West's detective work, The New York Times pulled Handbook for Mortals from its Best Sellers List, restoring The Hate U Give to its rightful place at No. 1. You can check out Stamper's full thread, which is too long to share here, by clicking on the tweet below.

Not everyone was against Sarem, however. The actress and former Blues Traveler manager received social media support from her celebrity friends. James Marsters, who formerly starred on Buffy the Vampire Slayer with GeekNation co-founder Clare Kramer, tweeted his congratulations to Sarem on her debut. Another Buffy alum, Nicholas Brendon, liked Sarem's Facebook status regarding Handbook for Mortals' release. Sarem's cousin, former 'N Sync member J.C. Chasez, tweeted an affirming message as well.

In a Friday interview with The Hollywood Reporter, Sarem hit back at critics who said her book sales were inorganic:

My personal opinion: I’m a first time author; I did some great numbers ... They put me on the list. The list is curated. They didn’t have to put me on the list despite how many books I sold. When these people made a big issue, they were like, "This is too much effort."

Because some people in the YA community weren’t aware of it doesn’t mean that there weren’t plenty of people out there that were excited about it ... It's disheartening that someone I don’t know decided to attack me today basically because he had never heard of my book. I’ve never heard of his book either. It's probably great, but I’ve never heard of it.