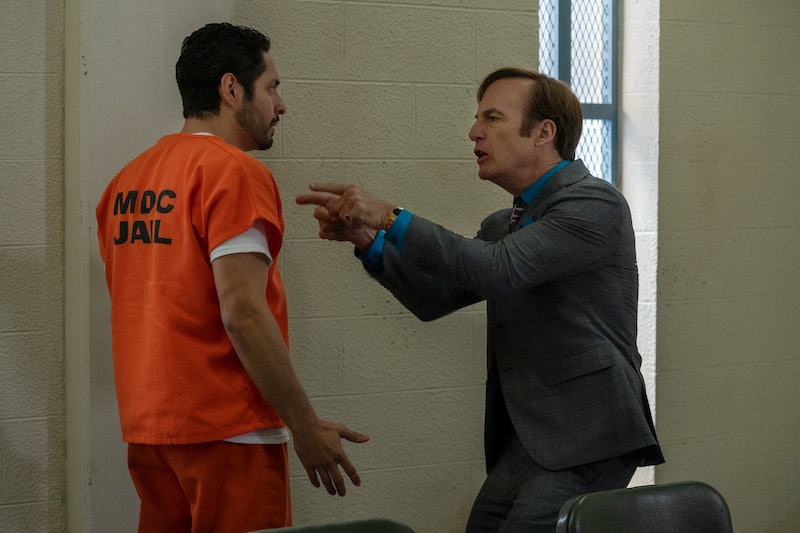 After Domingo (just recently christened Krazy-8) got arrested, Tony Dalton's Lalo enlists the skills of Saul Goodman. But Lalo's intention wasn't for Saul to get Krazy-8 out of prison; Lalo wants to set up Gus Fring. He uses Saul as a go-between to deliver a message for Krazy-8 to reveal the dead drop locations of Gus' arm of the business. That's where Hank and Gomie come in. Saul puts his patented theatrical spin on the ruse by showing up when the DEA agents arrive to hear Domingo's intel. In doing so, Saul secures that Krazy-8 becomes Hank and Gomez's personal CI.

By the events of Breaking Bad, Hank still believes that Krazy-8 was working for him within the cartel. But, turns out, Krazy-8 was most likely feeding Hank and Gomez tailored information that only hurt Fring's side of the organization and not the Salamanca side.

Yet, the double-, or rather triple-, crossing gets even more complicated by Nacho's involvement. As Nacho is secretly working for Gus Fring, he tells Gus that Lalo has leaked the information about his dead drops to the Feds. Lucky for Nacho, Gus decides having a mole in Lalo's ranks is more advantageous than securing his half a million dollars. So, as Norris and Quezada are set to return again for the next episode, they'll seemingly find that Domingo's intel is legit and keep him on as an informant, unaware that this is all an elaborate game being played by Albuquerque's two major drug dealers.

Presuming Nacho is still alive in Breaking Bad Season 1, any information that Krazy-8 delivers to the DEAs to hurt Gus has been vetted by Gus himself. But while Krazy-8 may not have been as damaging to Gus as he thought he was, he sure does hurt Walter White. Walter killing Krazy-8 is like his inaugural breaking bad moment (if you don't count cooking meth) and Krazy-8's death directly leads Hank to discover Heisenberg's 99.1% pure meth.

While Hank might have been being duped by Krazy-8 (and subsequently, Nacho), he does instantly recognize that this new meth means "Albuquerque just might have a new kingpin" in the mysterious Heisenberg. In the end though, Walt's drug dealing is what kills both Hank and Gomez. But they have new life in Better Call Saul with Jimmy's career is crossing over with the Mexican drug cartel and it will be fascinating to see just how much these two DEA agents were actually the pawns in Gus and Lalo's deadly game.