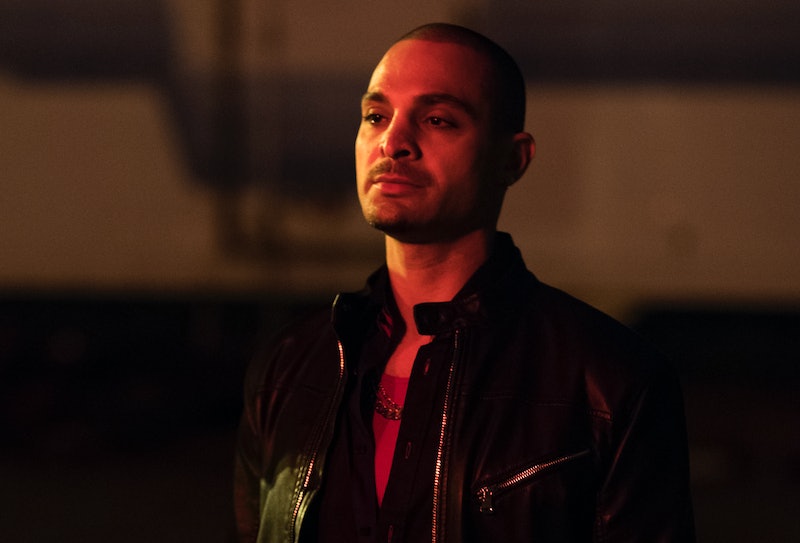 Major spoilers ahead for the "Breathe" episode of Better Call Saul. Gus Fring is the type of man who doesn't miss a thing. So when he confirms Nacho had tampered with Hector Salamanca's medication, he uses this to his advantage. Nacho works for Gus now on Better Call Saul after Gus reveals that he knows what Nacho did in "Breathe." This puts Nacho in a perilous position as he must be a double agent in the Mexican drug cartel. Nacho knows that Hector's nephews, the Cousins, aren't people to mess with. And Gus uses that to secure Nacho's fealty in "Breathe," threatening to tell the Salamanca family that Nacho betrayed them. With this strategic power play, Gus will become more powerful in the Mexican cartel and while it's not great news for Nacho, this move may also lead to a major Breaking Bad connection that will delight fans.

Gus was immediately suspicious of Nacho when Hector had his stroke during the Season 3 finale. He then had Victor follow Nacho in the Season 4 premiere, and Nacho gave himself away by disposing of the tampered pills. While Nacho is clearly stressed about the truth coming out, he puts on a brave face in front of his colleague Arturo and the Cousins while visiting Hector in the hospital. And at the end of "Breathe," Nacho doubles down on portraying his false allegiance to the Salamanca family when he threatens Gus' men Tyrus and Victor with a gun. That's unacceptable to Gus, and he and Victor attack Nacho and Arturo in the parking lot. "I know what you've done. The Salamancas, they do not," Gus tells Nacho as Arturo suffocates to death in front of them. "From now on, you are mine."

Nacho had wanted to kill Hector because the Don was using Nacho's father's business to transport drugs. But it also seems like Nacho wants to get out of the dangerous business. Yet, Nacho's father provides a moment of foreshadowing when he asks his son, "When is it over for you?" Because now that Gus has Nacho under his thumb, it doesn't seem like Nacho will ever be able to escape the drug cartel.

While the fates of many characters in Better Call Saul have already been revealed in Breaking Bad, Nacho's future is a mystery. In Saul's first appearance on Breaking Bad, he mentions Nacho (by the name of Ignacio) to Walter and Jesse. After the bumbling drug dealers kidnap Saul, he says to them, "It wasn't me, it was Ignacio. He's the one." Since Saul uses the present tense, it seems that Nacho is alive at this point in the story. But he still has a target on his back since Saul is putting the blame on him.

Also in this Breaking Bad episode (appropriately-titled "Better Call Saul"), Saul worries that Walter and Jesse are working for a person named Lalo. During the AMC Summit in New York City in June, Better Call Saul executive producer Melissa Bernstein revealed that Lalo will be in Season 4. As The Hollywood Reporter noted, it was then announced during San Diego Comic-Con that Tony Dalton will play Lalo. So perhaps Lalo is brought in by the Salamancas to take the place of Hector as he recovers from his stroke.

Gus despises Hector, but the majority of the drug cartel doesn't realize that. And he's putting on a big show of giving Hector the best care since he most likely is the mysterious benefactor who provided the money to ensure a doctor from John Hopkins can oversee Hector's care. But viewers know this is all a way to ensure that Hector suffers as much as humanly possible. And now that Gus has Nacho working for him, he can use the insider intel that Nacho gets to hurt the Salamancas even more.

While that gives Gus a major advantage (for now), Nacho just might be doomed. There's no way that his actions won't lead to the Salamancas becoming suspicious — especially if Lalo is as intimidating as implied by Breaking Bad. So while Nacho might live until the events of Breaking Bad, Better Call Saul Season 4 will show how stressful of a road he is on to ensure his survival.