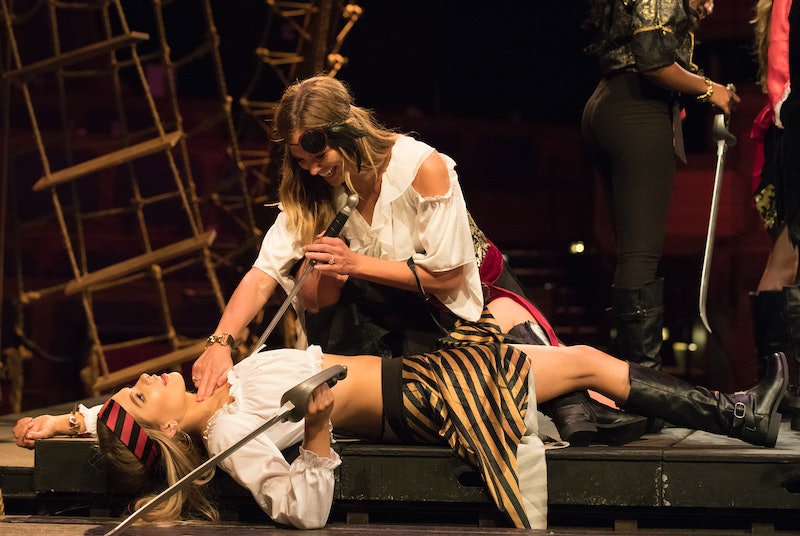 Colton's season of The Bachelor is not even a month in, and yet we are diving very deeply into the drama. You know when Chris Harrison says this is the "most dramatic season ever?" Perhaps Colton's season will actually live up to that standard. So far, there's been a virgin (that's Colton, if you hadn't heard), tons of smooching, Terry Crews, and, already the tattling has started. And it's that tattling that party inspired The Bachelor's Hannah B. memes to hit the internet.

Hannah B., or "Alabama Hannah," as she is sometimes called, is from Alabama, obviously, and she's a former pageant queen — Miss Alabama, to be exact. She yells "Roll Tide" a lot. Anyway, Hannah B. knows Caelynn from their pageant life, because Caelynn is the former Miss North Carolina, and it turns out that these women were friends before they became distinct enemies. Hannah B.'s biggest issue, though, was telling Colton only four weeks in that Caelynn was a manipulative monster.

Doesn't she know that snitching never gets results on The Bachelor? Hannah B.'s anger at Caelynn's group date rose had her baring her teeth — literally. In a lackluster season of The Bachelor, this was something the Internet grabbed onto as fast as Colton sheds his shirt, resulting in a lot of Twitter chatter about Hannah B.'s "beastly" speech.

Yeah, Hannah B. is mad at Caelynn, and yeah, Caelynn is mad at Hannah B., and like I said, it's too early in the season for this hot nonsense. I didn't even know Caitlin and Caelynn were different people until Colton sent Caitlin home (and to be honest, I'm still not sure). But The Bachelor fans must feel a kinship in Hannah B., because they sure seem to like her attitude. Let the memes begin.

They Had A Cinematic Touch

And Played Into The Pageant World

Those Teeth Called Back To Another 'Bachelor' Lady

Olivia did it first. Maybe even better.

The Beastly Comparisons Were Obvious

Most Agreed This Was All Great For The Bachelor

At least she knows how to bring the conversation to a new level.

If Hannah B. and Caelynn have their ways, it seems like these two women are going to inspire even more memes as this saga drags on. So far, both women have conflicting stories about who is the tormenter and the tormented, and it's all just ripe for producer-led drama. Right now, Hannah B. looks like the bad guy, poking at an "innocent" Caelynn and her doe eyes, but if there's one thing I've learned from watching 22 seasons of The Bachelor, it's that personalities and alliances can switch on a dime.

Caelynn may be the apple of Colton's eye and Hannah B. may be suspect right now, but, oh, a little two-on-one date is sure to stir everything up quite nicely. No matter what happens on The Bachelor, you can bit that the Twitter users of Bachelor Nation will be raring and ready to go with the snarky Internet commentary we all know and love.