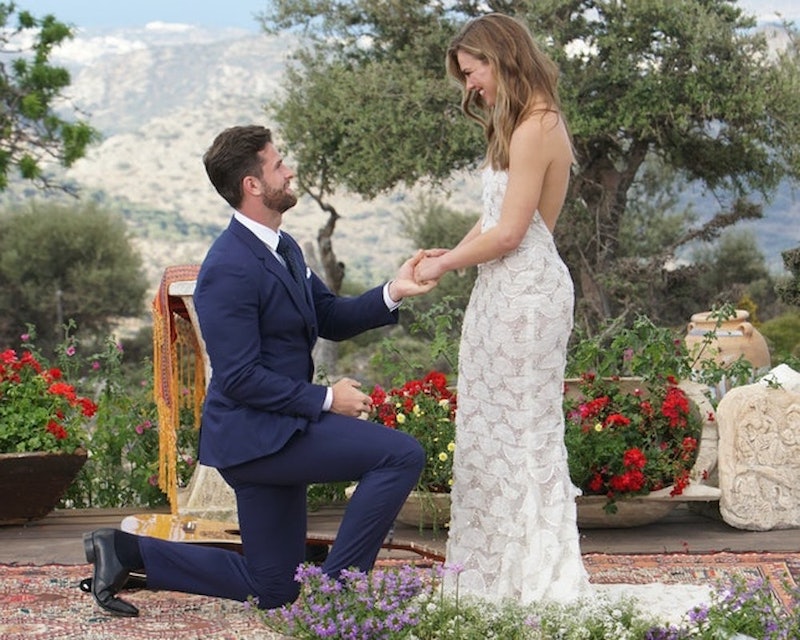 You may not be able to change the past, but you can learn and grow from it. That's the main takeaway Hannah Brown is holding onto, even now, one year after her season of The Bachelorette came to a close, which saw her get engaged only to be heartbroken a few months later. But even though things didn't work out the way she wanted them to, Hannah B. looked back on Jed Wyatt's proposal one year later with a sense of acceptance, knowing that it ultimately helped her become the person she is today.

“Ever look back on a memory and it feels like just yesterday… but also like a different life? Me too. Exactly a year ago today,” the former Bachelorette captioned an Instagram post on Monday, May 11, alongside an image of herself in Greece moments before Jed got down on one knee. She went on to admit that while she may have looked excited on-screen, internally she knew deep down that something didn't feel right. "I remember thinking, 'Oh, this has all the makings to be the best day of my life...but gah, it doesn’t feel like I thought it would,'" she explained. "I could fake a smile but I couldn’t shake the doubt, and looking back, I know why. That ending was not easy, but it was necessary to get me here.⁣"

Shortly after getting engaged, Hannah learned that Jed had reportedly been dating aspiring musician, Haley Stevens, when he decided to join The Bachelorette. According to Stevens, no actual breakup occurred and he assured her they would be together once he was done with the show. After confronting him about the report, Hannah decided to break up with Jed, stating that this was "not what I said yes to."

It was undoubtedly a heartbreaking experience to have to go through, but the Alabama native has come out of the ordeal stronger than ever and hopes that her own pain and trauma can help others in their time of need. "If you are reading this right now, wondering how to navigate a situation that feels so painful and so not what you wanted, maybe you’ll let me tell you what I would’ve told myself: Hold on," she wrote. "Sometimes you’ve gotta walk through the shadows to stand in the sun. And trust me, you’ll really appreciate the way it feels shining down on you, too."

More like this
Hannah Ann Got Engaged 3 Years After 'The Bachelor' & The Proposal Was Dreamy
By Grace Wehniainen
'Bachelorette' Vet Clare Crawley Revealed Her Stunning Wedding Photos
By Stephanie Topacio Long
'Bachelorette' Vet Clare Crawley Unveiled 2 Special Wedding Day Accessories
By Stephanie Topacio Long
10 Photos Of The Wildest Limo Arrivals From 'The Bachelor' Premiere
By Brad Witter
Get Even More From Bustle — Sign Up For The Newsletter
From hair trends to relationship advice, our daily newsletter has everything you need to sound like a person who’s on TikTok, even if you aren’t.