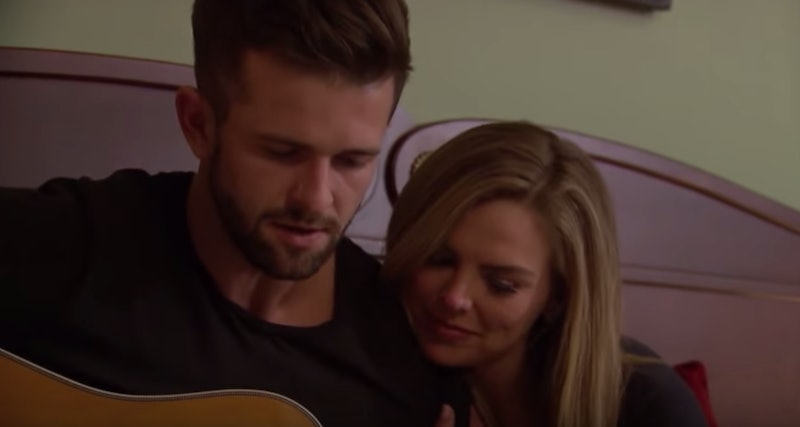 In the words of Chris Harrison, this might have actually beeen the most dramatic season of The Bachelorette yet. After weeks of Luke P. chaos followed be a seemingly happy ending, Hannah and Jed broke up on the Bachelorette finale on Tuesday night. And hoo boy, it was a lot to watch.

Hannah and Jed's breakup came after she gave him her final rose and he proposed. The two were happily engaged for a little while, but then rumors began to surface. Haley Stevens, an aspiring musician, claimed to People that they were still in a relationship when he went on the show, and that he'd signed up only to find a platform for his budding music career. Jed admitted the latter part to Hannah early on, but said his feelings for her were genuine. He remained silent about Stevens' other accusations throughout the season aside from a vague Instagram post asking fans to be patient until he could explain. On Tuesday night, he finally did just that.

Hannah confronted him about the story, and asked for the truth about his relationship with Stevens (who they didn't refer to by name). "I don't even know where to start. Why did you wait 'til all this happened to tell me?" she said. "Not even to tell me, to let me find out whatever happened." Jed said he didn't bring it up because there were two very different versions of the same story, but that he was ready to talk about it now.

Essentially, Jed said that when he met Stevens, he was "very single." "I was going out with my friends and being young, having fun," he said. "I didn't feel like it was an exclusive thing. I was dating around. It never felt like a relationship to me." Nonetheless, Jed explained that he and Stevens went on a cabin trip in the mountains just the two of them, that she planned a surprise birthday for him, that her parents paid for a vacation for his birthday, that she met his parents, and that he told her he loved her.

This might have made Jed one of the most hated contestants in Bachelor/ette history — not only was the studio audience booing and groaning at his comments, but Twitter didn't hold back either. And this is on a season that also included Luke P.

In the end, Hannah said she probably can't get past this, no matter how many excuses Jed makes or how much he promises to change.

"This doesn't go away," Hannah said. "Nothing is ever how you plan it to be, but I just feel like this experience has been taken away from me... I was being told half-truths and lies. You wanted me to have clarity. Clarity means truth. You got to see all of me, and I didn't get to see all of you.... You were really selfish in this, and I feel like right now, my decisions, my choices, were all tainted."

Eventually, she gave back his engagement ring, despite his protests. "I can be mad, and I can be upset. But I do have grace for you," she said. "But also, this [ring] doesn't mean the same thing. That's not what I said yes to." The ring was returned, and when Hannah joined Harrison onstage for the live portion of the show, she confirmed that they were no longer together and that she no longer loved Jed "in that way."

Hannah may not have found the right partner for her on The Bachelorette, but perhaps she found something better: she's said she learned a lot from the experience about not only what she wants from a partner, but what she deserves. And a lesson in self-worth is better than any man.