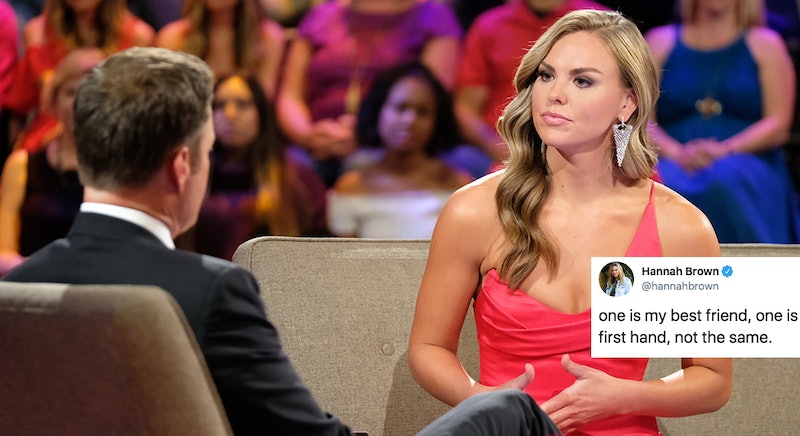 On Aug. 13, former Bachelor in Paradise star Tanner posted a tweet comparing Demi to Jed Wyatt and it led to Tanner and Demi's Twitter intense exchange on Aug. 14. Eventually, even Hannah Brown weighed in on Demi and Tanner's back and forth on Twitter.

Aside from Demi being one of Hannah's closest friends, it does make sense for Hannah to chime in since Tanner's initial remarks compared Demi to Hannah's ex-fiancé Jed Wyatt. Hannah and Jed got engaged on her season of The Bachelorette. However, Hannah ended the engagement weeks later, after Jed's ex Haley Stevens revealed that Jed went on the show while they were still dating. She also claimed to People that he had the intention of promoting his music career on the show and he ghosted her soon after the show stopped filming a June interview with People.

Tanner compared Jed's Bachelorette actions to Demi's on-screen confession that she was dating a woman back home before she started filming Bachelor in Paradise. Demi shared this with Hannah before she hit the beach. She also opened up to fellow BiP cast members Tayshia Adams and Katie Morton before she discussed the situation with Derek Peth, the guy she got a rose from on Bachelor in Paradise.

In a now-deleted tweet, Tanner wrote, "So it's okay for Demi to have a relationship back home... but not for Jed? Got it..."

In Hannah's eyes, the two situations are very different. She tweeted, "one is my best friend, one is my ex-fiancé....I can tell you first hand, not the same."

Hannah didn't get into too much detail, but her succinct tweet indicates that she strongly believes that these are two different people in two different situations. Plus, she does know them both very well, so it makes sense for her to share her thoughts.

In response to a fan who accused Hannah of "bashing" Jed to defend Demi, Hannah tweeted, "Not bashing anyone...just staying it’s not the same and the comparison is irrelevant."

Hannah didn't even get into any specifics with her statement. All she did was point out that these are not the same relationships or people. Essentially, it's like comparing apples and oranges, as the old saying states.

In contrast, Demi and Tanner had a lot to say after Tanner's initial tweet. Even though he deleted the post, the screenshot does exist and Demi saw it. Demi quoted a tweet from Us Weekly and mentioned Tanner in the following NSFW tweet: "Oh f*ck off, not the same at all. Maybe I can teach you a thing or two about going down on your wife."

Even though Tanner deleted his initial tweet, there were lots of follow-up posts that are still on his Twitter page. Tanner responded to Demi, "It’s not the same thing? Then how did I hear about your “plan” before filming even started?"

Demi replied to that claim by tweeting, "There was NO PLAN. You are speaking on something you HEARD about as if it is a fact. I was 100% honest and upfront the entire time. You are a grown ass man tweeting about rumors." And Tanner told her, "Gotcha... I must have dreamt it all up then... my bad."

Amidst a lot of back and forth, Tanner did say that he wished Demi "nothing but happiness" ... among other things. Tanner rhetorically asked, "If a rumor becomes true... doesn’t it then become a fact?"

At the end of the tweet, Tanner told the BIP Season 6 star, "don’t throw stones if you live in a glass house."

Is this the end of their back and forth? Will Jed share his thoughts now that Hannah has? Will Demi and Tanner come to some sort of peace? Or will they continue beefing and throwing shade on social media as this season of BIP progresses? Bachelor Nation cannot have two BIP icons at odds.