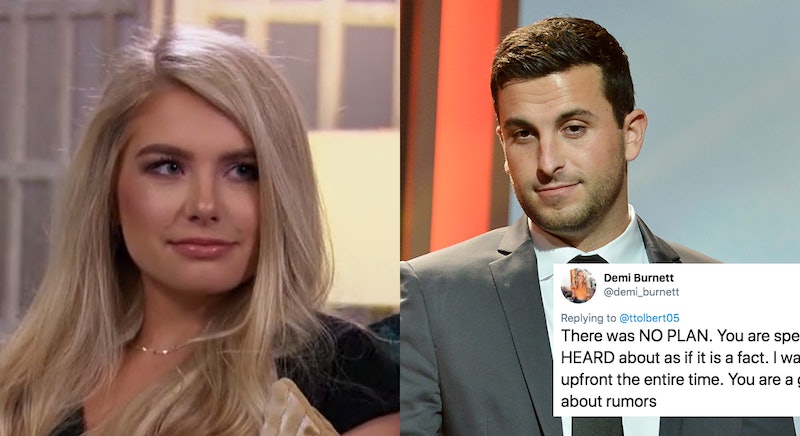 As if this season's Bachelor in Paradise episodes weren't dramatic enough, there is even more going down on social media. BIP alum Tanner Tolbert compared Demi Burnett to Jed Wyatt from The Bachelorette. And, then, Demi responded to Tanner and they had several intense exchanges on social media.

It all stemmed from a now-deleted tweet that Tanner originally posted on August 13. He wrote, "So it's okay for Demi to have a relationship back home... but not for Jed? Got it..." Considering that Jed & former Bachelorette Hannah's relationship ended because he had a girlfriend during the filming of the show, Demi did not take too kindly to that comparison. At all. On Aug. 14, she quoted a tweet from Us Weekly about the diss and wrote, "Oh f*ck off, not the same at all. Maybe I can teach you a thing or two about going down on your wife."

Demi's negative reaction to the Jed comparison comes from the fact that Hannah ended their engagement after news broke via People that he went into the season with a girlfriend. Jed's ex Haley Stevens claimed to People in June that she and Jed were still dating while he was pursuing Hannah on The Bachelorette and that he ghosted her after filming ended.

Hannah weighed in on the comparison, tweeting, "one is my best friend, one is my ex-fiancé....I can tell you first hand, not the same."

Before getting to the beach, Demi told Hannah she was dating a woman back home and she was confused about her feelings. Ultimately, Demi concluded that she was open to meeting someone in Paradise. At this point in the season, Demi and Derek Peth have been together. On the Aug. 13 episode, Demi told Derek about her previous relationship and admitted her ex was still on her mind. This prompted a sensitive and mature response from Derek.

Based on the season previews, it seems like Demi does explore a relationship with a woman on the show, but it is unclear who it is. Still, those previews indicate that Demi's pre-show love interest will appear on the show

Tanner may have deleted the original tweet, but he had even more to say about Demi the next day. He tweeted, "Before filming even began I heard that Demi planned to leave the show engaged to this girl... I support Demi fully, but she could have proposed off the show. I am tired of everyone talking beforehand and pre planning these relationships... whether it’s Demi, Blake, anyone..."

Demi responded to that accusation by tweeting, "There was NO PLAN. You are speaking on something you HEARD about as if it is a fact. I was 100% honest and upfront the entire time. You are a grown ass man tweeting about rumors." And Tanner responded, "Gotcha... I must have dreamt it all up then... my bad."

He also compared Demi to Scott. In case anyone forgot, this is actually the first guy Hannah dumped on The Bachelorette for having a girlfriend during the season premiere.

Tanner's tweets were a case of comparing apples to oranges and bananas. First off, The Bachelorette and Bachelor in Paradise are two different shows with very different premises. BIP is all about exploring different relationships, whereas The Bachelorette is about solely pursuing the lead.

In regard to these two situations, Jed didn't actually come clean about his at home situation until it became a national news story and Hannah confronted him. In contrast, Demi mentioned her lingering past on camera before she even got to the resort and in later conversations with fellow cast members Katie Morton an Tayshia Adams. Throwing Scott into the mix, like Jed, Scott was not at all forthcoming about his relationship messiness until he was confronted by Hannah.

Even though there are some obvious differences there, Tanner continued talk about the topic in several Instagram stories. He posted a screenshot of a tweet and wrote "Just to be clear... I am a big Demi fan and wish her nothing but happiness." He also said, "I just don't like how everyone tries to stage sh*t these days..."

He went on to clarify that Demi isn't the only cast member he takes issue with. He added, "Oh, and, it's not just Demi either. It's Jed and all his BS. It's Blake and Hannah G flying and meeting each other before filming."

It's tough to see two BIP fan favorites going at it, especially about some sensitive topics. Hopefully these two can talk about this offline and find some resolve.