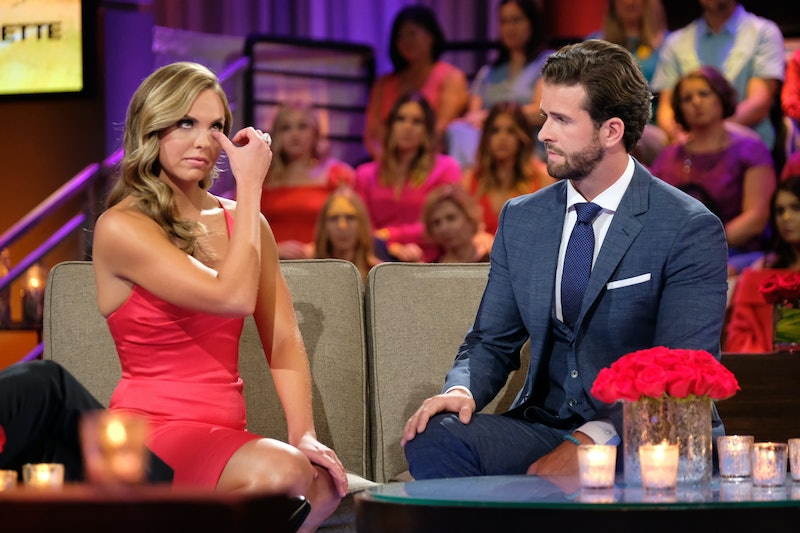 The time has come for Bachelorette viewers to get answers, and Jed's After The Final Rose interview finally brought some — kind of. Jed’s response to his ex-girlfriend’s accusations came after viewers watched he and Hannah's relationship fall apart onscreen. And though Hannah was hurt when she joined him onstage, the two focused on growing from the experience.

Fans have been waiting for Jed's side of the story ever since Haley Stevens, an aspiring musician, gave an interview to People magazine in mid-June claiming she and Jed had still been in a relationship when he went on the show, and that they had spent the night together right before he left. She further said Jed had gone on the show merely to advance his music career (something he admitted to Hannah early on), and that he'd supposedly told her he'd come right back to her after filming.

Jed confirmed much of this account when Hannah confronted him about the story after their engagement, though he insisted Stevens (who he did not mention by name) had never been his girlfriend and that they weren't exclusive. He did admit he'd told her he loved her, and that he did not properly end their relationship. Needless to say, Hannah was not happy. She gave him back her ring, and made clear on After The Final Rose that she's not interested in getting back together.

When he stepped onto the After the Final Rose stage, Jed immediately began apologizing. He said especially now with hindsight, he can see just how wrong he was, and the destruction his dishonesty caused.

"It ruined what we found here in a place that I never would've expected to find a love like this, with someone that I wanted to spend the rest of my life with," he said to Hannah. "I know you felt the same, and I'm sorry I took away that experience from you. I'm sorry that this has hurt your family, your friends, and Bachelor Nation, my family. I'm sorry. I'm responsible for this. I will own up to it all day."

When pressed on why he didn't come clean earlier, Jed said he didn't want to go there because he didn't want to lose Hannah. "I was acting out of fear instead of love and respect for you. I was afraid to lose you," he said. "I wasn't sure how any of it would be taken. Though I felt I had closure on my part, I can now see that there wasn't on other people's parts."

Hannah was gracious in the way she received his apology — probably more so than she needed to be — and said she hoped this can be a learning experience for him.

"It's so messed up. It's just sad. I appreciate your apology, and I know that it's hurt me a lot, but I know that it's not been easy for you and your family," she said. "I know critics can be hard — I have some too. What you did was not right, and not good, but I did fall in love with you, and I know that that person is in there. I just hope that from this you will be honest and learn and grow into the man I do believe you can be for whoever in your future."

When host Chris Harrison asked Jed how he feels about Hannah now, he said he's always going to love her. But for Hannah, it's a different story.

"I'm not trying to punish you, but my feelings have changed. And I think that when that trust was broken, my feelings really just were broke with that. I don't love you like that anymore," she said, immediately scolding an audience member who began to cheer her. "It's not something to clap about. It's sad. I know you've hurt me, but I'm not trying to hurt you right now. It's just not what anyone needs to start a relationship on... I just want to feel really confident in my forever."

Things are definitely donezo for Hannah and Jed, and though it's disappointing she had to go through this at all, Hannah said she's come out on the other side stronger. Hopefully her remarks to Jed have resonated, and he'll make sure he's actually single before he begins another relationship.