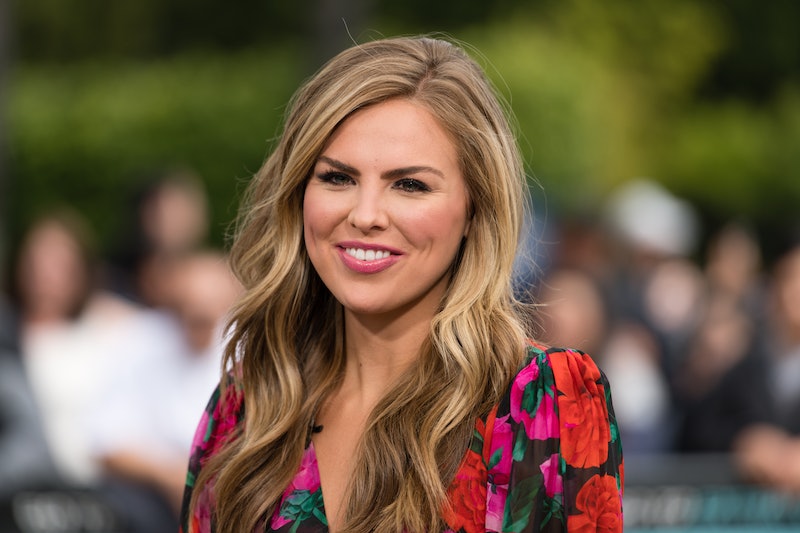 In an Instagram Live that touched on the death of George Floyd, the black man who died while pinned under a white police officer in Minneapolis, Hannah Brown apologized again for her N-word controversy. The Bachelorette star went live on May 30 and vowed to be “part of the solution” after she came under fire two weeks ago for singing along to the N-word on social media. While she initially issued a lackluster apology and shrugged off the criticisms, Hannah eventually issued a second apology on May 17 with a promise to “do better.” Now, she’s echoing the sentiments again in light of the “suffering and anger” surrounding Floyd’s death.

Revealing that she’s been educating herself and asking herself the “tough” questions, Hannah said on Live, “I don't want to be an ignorant white girl who uses the N-word and goes onto a platform intoxicated and being that way." She continued, “I know these words don't fix anything. My granddaddy always used to say, ‘Sorry doesn't fix it.’ And sorry doesn't fix it, but I promise when you learn the things that you didn't know before, it changes your heart and your convictions like never before… I promise you, I will not be a part of the problem anymore."

She concluded, “I will be part of the solution, and you will see that. So from the bottom of my heart, I'm so sorry… And I promise to continue doing better. I promise."

The Live comes after other Bachelor Nation alums condemned Hannah's actions. In an interview on Bachelor's Nick Viall’s podcast The Viall Files on May 25, Bachelorette's Rachel Lindsay said she had “multiple conversations” with Hannah and that she had asked her for input on how to address the situation. "She was very remorseful… She was admitting she was wrong, and she said she wanted to go on a Live,” Rachel said. She also detailed plans to go on a joint Live, but it ultimately didn’t happen. “She was going to go first and then bring me on. Twice, she got off the phone with me to tell me, 'OK, I'm going to go do it. I'm just going to go get ready,'" Rachel said. "Hours later, nothing… And then, hours later, nothing again until it was ultimately decided she wanted to do a statement."

Mike Johnson, who appeared on Hannah’s Bachelorette season, also weighed in on her "inappropriate" behavior. He told TMZ on May 19, "My aim is that in this moment we don't divide, we come together, learn from this and create change for the better.” Here's to hoping that Hannah did, in fact, learn from the situation and will create change for the better.

More like this
Twitter Has Renamed Ekin-Su After *That* 'Dancing On Ice' Performance
By Sophie McEvoy
This Pre-'Love Island' Video Of Olivia & Zara Together Changes Everything
By Bustle UK
Twitter Can’t Make Up Its Mind About Ekin-Su’s 'Dancing On Ice' Skate-Off
By Sophie McEvoy
Hannah Ann Got Engaged 3 Years After 'The Bachelor' & The Proposal Was Dreamy
By Grace Wehniainen
Get Even More From Bustle — Sign Up For The Newsletter
From hair trends to relationship advice, our daily newsletter has everything you need to sound like a person who’s on TikTok, even if you aren’t.