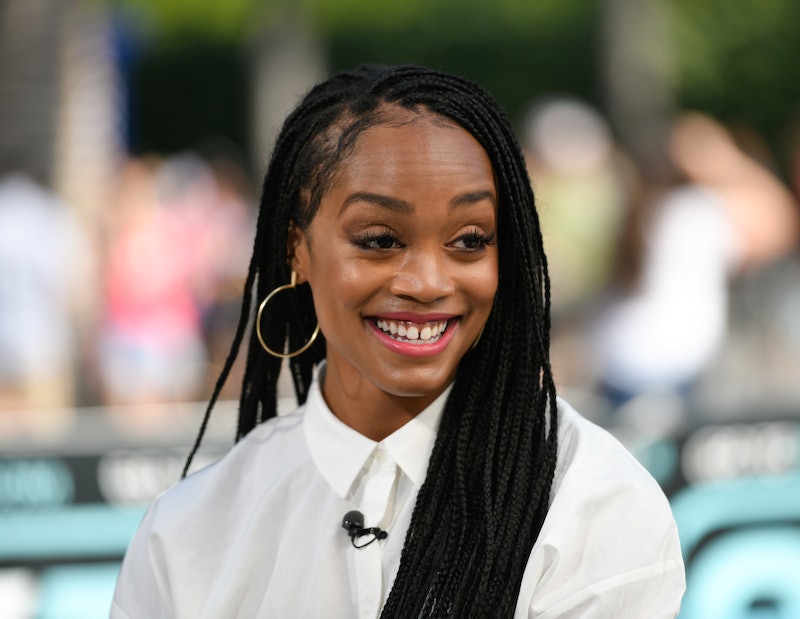 Rachel Lindsay wants to set a few things straight about her fellow Bachelorette's recent controversy. A few weeks after Hannah Brown apologized for singing the n-word during an Instagram Live, a recent episode of The Viall Files revealed that Hannah B's apology was almost very different, according to former Bachelorette Rachel Lindsay.

On May 16, Brown said the slur while mumbling the lyrics to DaBaby's "Rockstar" during an Instagram Live. Though she denied that it was her who said it immediately afterwards, the following day, Hannah released a statement apologizing for singing the n-word, saying it was "unacceptable" and that she will "do better" in the future. That same day, Rachel expressed her disappointment with Hannah's statement during an Instagram Live of her own, explaining that she reached out to the Dancing With the Stars champion and invited her to have a public conversation about it on Instagram in lieu of a statement.

While speaking with her Bachelor ex Nick Viall on the May 25 episode of his podcast, Rachel revealed that the planned Instagram conversation was actually Hannah's idea, and that she said that she wanted to apologize on-camera. "When Hannah and I talked, she wanted to know what my thought was as to what she should do," Rachel recalled. "And she was very remorseful. She was very upset. She was embarrassed. She was admitting she was wrong, and she said she wanted to go on a Live."

According to Rachel, Hannah was planning to start the Instagram Live, apologize, and then bring in Rachel to have a candid discussion with all of their followers. However, "hours later" — and after several more phone calls between them, according to Rachel — Hannah ultimately decided to simply release a statement on her Instagram Story. "The reason it disappointed me so much that Hannah decided to give a statement is because — [in] her words — 'a statement would be insincere,'" Rachel explained.

"I believed her when she said it," she continued, adding that Hannah told her that it was "her team" that was pushing for a statement. "She said ... she felt that God had wanted her to use her platform for a bigger purpose. And she was going to step up and do that." Rachel was disappointed by Hannah's apparent change of heart, which prompted her social media response. "To see her ultimately text me and say, 'I'm going to give a statement' was extremely disappointing because, you yourself, said that that was insincere. So why did you therefore decide to do an insincere action? I'm very confused by that."

Rachel went on to defended her decision to weigh in on the situation, explaining, "It's about me representing myself as a black woman, and it is a derogatory term that is used against to oppress black people. So how, as being a black person, do I not speak out about this?" As for those accusing her of "bullying" Hannah, "It just baffles my mind," the former Bachelorette said. "'You should be showing Hannah grace?' Why isn't that used on the flip side of things, you know? It's crazy."

Since giving her statement, Hannah has stayed off social media, but several other members of Bachelor Nation have weighed in on the situation. Whether Hannah is still up for a deeper conversation on the matter is up to her.