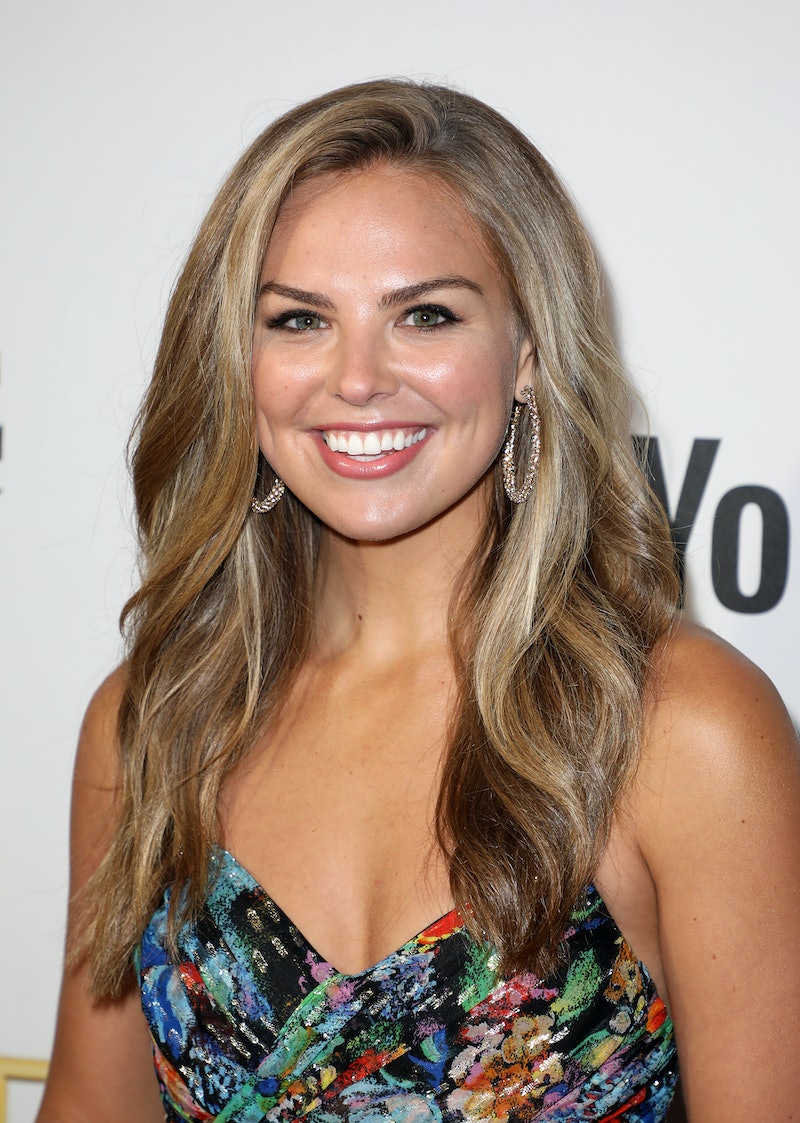 In addition to plenty of drama with plenty of men named Luke, this season of The Bachelorette has gifted us with the usual dose of fabulous outfits on behalf of the woman trying to find love. Current Bachelorette Hannah Brown's looks on screen have been no exception, but on Monday night, at an Elite Daily-hosted Miami screening of a new ABC show, Grand Hotel, Hannah B. wore a floral dress by The Kooples that had quite a different vibe from the sparkly gowns and cute sweatshirts we've seen on her so far on this season of the show.

Sure, the star of the dating show has never been afraid of prints (see: her leopard button down in episode 2) or high slits (a la the long, silver gown she wore during her first rose ceremony), but there's something about this dress that feels out of the ordinary for Brown — in a good way. Maybe the fun, bright print (and how excited she looks to be wearing it) is an indication that the season — which she has almost definitely already finished filming — has a very happy ending for her?

The cocktail dress in question is made from knee-length silk, with a cutout on the left side that shows off a mini skirt underneath. It features a draped silhouette and a watercolor-inspired floral print that's perfect for summertime. Brown paired the look with her signature blonde waves, some hoop earrings, a simple bangle, a statement ring, and sparkly, strappy heels. All in all, it's an ideal ensemble for a fancy party happening in a hotter climate.

Unfortunately, Brown's dress is sold out (not surprising — it's very good) on The Kooples site. However, the brand is having a huge sale right now — most things are at least 40% off — and there are plenty of other floral flocks you could get your hands on. If it's the pattern of Hannah B.'s dress you fell in love with, you're in luck: There's still a dress with a different silhouette available in the exact same print. (The Kooples offers sizes 0 - 4, which the brand says are equivalent to approximately an XXS - L.)

This red carpet appearance was a welcome one for Bachelorette fans who were bummed to see the show wasn't airing at its usual time on Monday June 10 to make way for game 5 of the NBA finals. Brown posted an Instagram after the red carpet explaining that the reality show will be back on Mondays, followed by Grand Hotel. For any fans looking for even more drama after watching Brown's dates every week, this show seems like it'll hit the sweet spot: Based on a Spanish series with the same name, it follows a wealthy family that owns a fancy hotel in Miami — and Eva Longoria is the executive producer. Between Brown and Grand Hotel, it seems like audiences will have a pretty good chance of getting a whole night of outfit inspiration every Monday starting June 17.