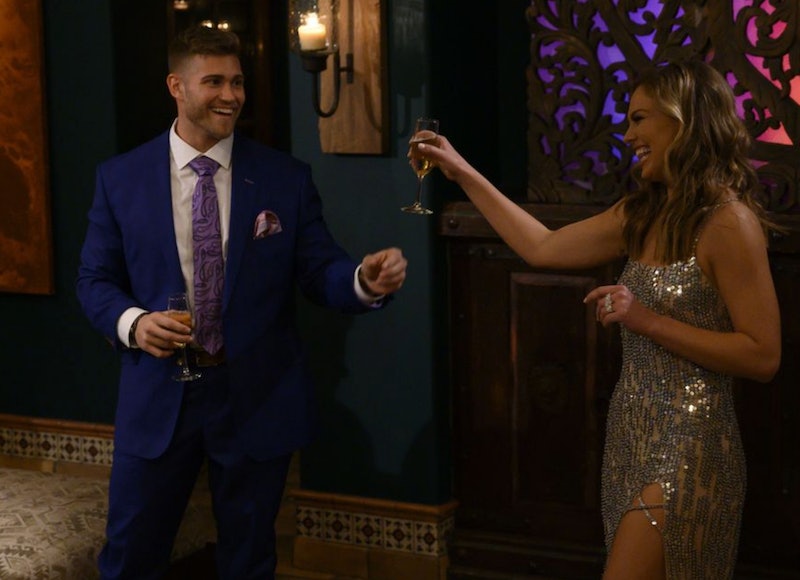 Every rose has its thorns, but as for the first impression rose on Hannah Brown's season of The Bachelorette? Well, it looks like that one's got thorns shaped like one contestant screaming in another contestant's face. Former The Bachelor contestant Hannah Godwin isn't so sure of Hannah B.'s first impression rose pick, and it has a heck of a lot to do with that scene from the "this season on..." trailer where Luke Parker stands right over another contestant and hollers, "I've been nothing but truthful and you are not going to mess it up!" It probably also has to do with other scene where another contestant says, "We all know that Luke P. is an evil, pathological liar." Suffice to say, it looks like Season 15 is not all smooth sailing for Luke P.

And understandably, those moments from the "this season on..." preview gave Hannah G. pause. In a recent interview with Entertainment Tonight, she made her thoughts on her former The Bachelor costar's first impression rose pick clearer than a freshly washed and dried wine glass. She said Luke P. "totally seems very extreme," and then added,

“And from what we’ve seen in the little previews, I’m like, ‘Oh, that’s a different kind of Luke.’ And that’s what scares me. You know what I mean? In some of the promos and commercials for [the season], he’s a totally different person.”

She went on to say that Luke P. "obviously has a lot of different sides, so hopefully [Hannah B.] sees all of them."

Hannah G. is not the only member of Bachelor Nation who happens to be wary of Luke P. When the keeper of The Bachelorette Season 15 first impression rose came up on the May 13 episode of The Ringer’s Bachelor Party podcast, guest Nick Viall summed up his feelings thusly: “He sucks, he truly sucks.” The Bachelor alum minced nary a word when he and pod host Juliet Litman discussed Luke P.’s anecdote about God visiting him “in the shower because he was getting too much sex,” his limo entrance, and basically everything else the guy brought to the season premiere. "I don't know if it will reveal itself this season,” Nick said. “He may just keep saying all the right things long enough to not look like an a**h*le, but mark my words, at some point we will all see the real Luke P."

Well, there is only one way to find out if Nick's onto something or if Luke P.'s going to prove 'em all wrong, and that is to keep watching The Bachelorette.

OK, fine, fine. You are right. That is not the only way to find out. You could always look up episode recaps, scroll through Bachelorette tweets, or ask your friends who watch the show if Nick's prediction holds water. But come on, where is the fun in that? So do yourself a favor and get the peanut butter and jelly and egg sandwich ingredients ready for next Monday. We've got a long season ahead of us, and it's important we keep our energy up.