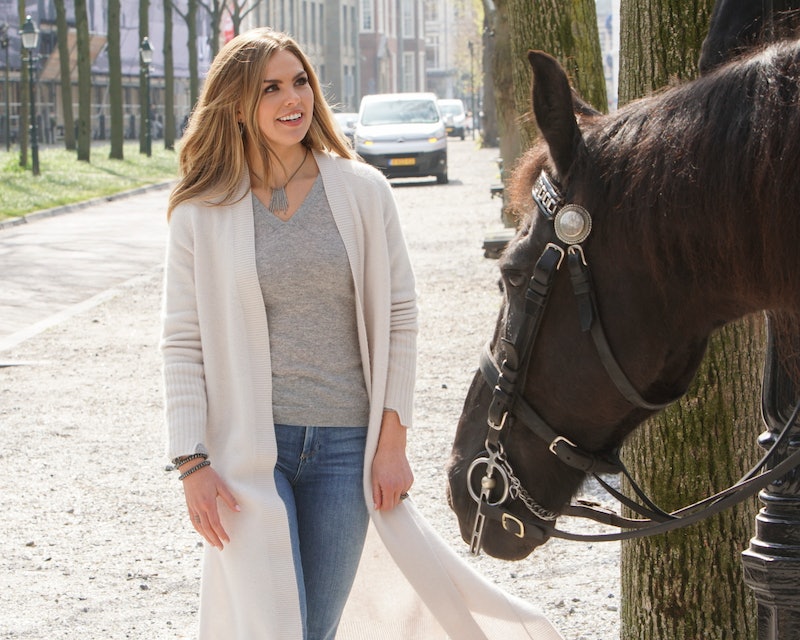 Luke P. may be busy digging his own grave in the eyes of both Hannah B. and viewers worldwide. However, he isn't the only one who has fallen under heavy scrutiny this season. Even the Bachelorette herself has faced some serious backlash over her decisions and actions, not only from some of her remaining contestants, but from fans as well. However, Hannah B.'s response to all of the Bachelorette criticism she's been receiving as of late, proves that she's still doing what she's had to do all season: standing up to the haters.

On Tuesday evening, Hannah took to her Instagram account to post a detail message of how she's feeling throughout this whole process. And while she made a point to thank those who are still sending her ongoing love and support, she also wanted her critics to know, "I refuse to feel shame" in regards to her journey on the show. "I refuse to not stand in the sun. I refuse to feel shame. I refuse to believe the lies and evil that flood my comments," Hannah wrote next to a photo of her in the Netherlands.

"I am standing firm in believing that maybe God wants to use a mess like me to point to His goodness and grace. But dang, it’s hard," she wrote. "The amount of hate I and the men on this journey with me receive...it’s chilling to know so many people want to spread hurt so recklessly. We all fall short of the glory of God...we just happen to do it on national television."

According to the reality TV star, she's been getting a lot of criticism regarding her Christian faith, noting that some people have accused her of giving "Christians a bad name." Given that her faith is something that she has proven to be very important to her on the show, it's no surprise that these comments have been particularly hurtful, but she's fighting back. "But I refuse to believe I give Christians a bad name," she wrote. "I’m an imperfect human. Who is yes, also a Christian. And God has a master plan for all the failures I continue to learn and grow from to work out for good, and for his glory."

She ended her post on a positive note, writing, "Thank you to those who continue to support me and my guys as we open our hearts to each other, and in turn...you! We appreciate you and your kindness!"

While Hannah seemed to address her post to audiences around the world, this statement comes right after audiences saw Luke P. question her faith and her morality on television. In Monday night's episode, Luke P. shamed Hannah for bungee jumping naked during her one-on-one date with Garrett. "It's just because I know that your body is a temple and honestly, like, I'm just thinking of you holding him bare-skinned and I'm just thinking in my mind like... it really pissed me off. I mean, it really frustrated me," Luke said at the time.

Hannah defended her decision, informing Luke that "it was in an experience that I wanted to have for myself" and reminding him that he doesn't own her body. But judging from a trailer for the upcoming episodes, Luke doesn't appear to take her words to heart and will continue to make judgmental remarks about her sexual history.

And Luke P. isn't the only one giving her a hard time, though, Just recently, Tyler C. defended Hannah to Bachelorette alum James Taylor, who tweeted that she should "make choices your future husband will be proud of." This remark most likely isn't what inspired Hannah to write her empowering Instagram post, but it signifies that type of judgment she's been dealing with all season long.

While it's admirable to see Hannah go to bat for herself time and time again, in the eyes of both fans and her suitors, it's not something she should have to do. She is an adult woman more than capable of making her own decisions about her life and one can't help but wonder if there would be so much criticism and backlash if it were a guy doing these things instead.

It seems this double standard is definitely still alive and well on The Bachelorette. Let's just hope Hannah's message will prompt the haters to keep their unwanted commentary to themselves for the rest of the season.And

More like this
It’s Official: 'The Bachelorette' Is No Longer A Fairy Tale
By Samantha Allen
Gabby & Rachel Reveal How That 'Bachelorette' Rose Ceremony Twist Happened
By Grace Wehniainen
Everything To Know About 'Bachelor' Host Jesse Palmer
By Justice Namaste and Radhika Menon
Kathy Hilton Tried To Explain Why She Misidentified Lizzo As Precious On Live TV
By Jake Viswanath
Get Even More From Bustle — Sign Up For The Newsletter