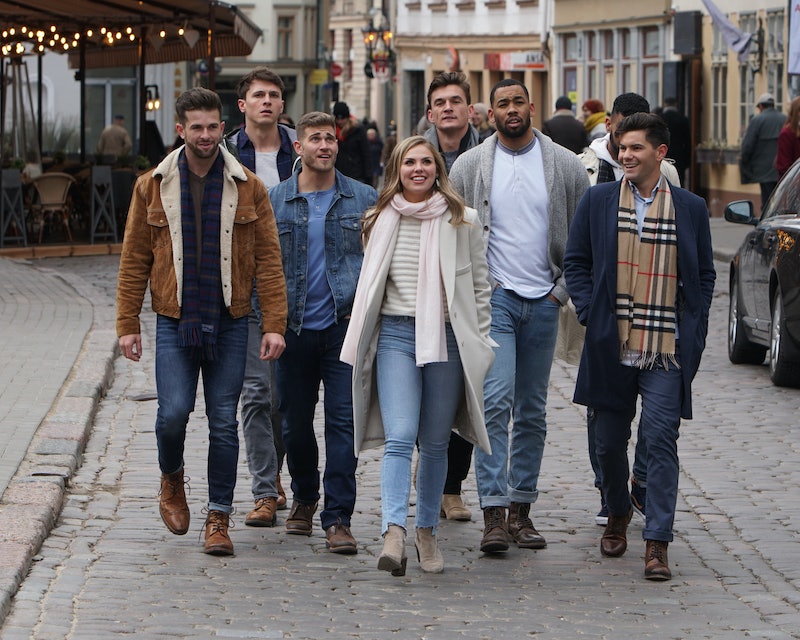 Bungee jumping can be nerve-wracking in its own right. But doing it naked is a whole other story. Hannah B.'s first one-on-one date of the night took place with Garrett, and they did just that. But despite all the noise about that date, Hannah Brown didn't bungee jump naked on The Bachelorette, at least not completely. Not that it really matters, because it seemed fun regardless, ad, as Hannah herself will tell you, if she wants to bungee jump naked, she'll bungee jump naked. And let's be honest: the sexist, possessive backlash she faced from Luke P. would have most likely still been on full display.

On Hannah's Instagram story Monday night, June 24, she shared a video where she gave a quick PSA for the evening's episode. "I have a spoiler of my own," she said. "During this episode, I always had my underwear on. My no-no square touched nobody else's no-no square." You heard it straight from her mouth: no "no-no" squares touched.

The Bachelorette producers did make a big fuss about showing her take her bra off, so by underwear she definitely meant their bottom halves. Black rectangles hid both her chest and their groins in the actual airing of the episode, seemingly implying that the two were completely naked. But, Hannah is here to set the record straight.

While plenty of people on Twitter were quick to comment on Hannah's naked bungee jumping date, there was one particular comment that stood out. Everyone's favorite Bachelorette commentator, Demi Lovato, did a live watch on her Instagram stories, and shared her mom's hilarious reaction to the bungee jumping. "I am a veteran Bachelorette watcher, and I can tell you that when they bungee jump with somebody, they don't pick them," Dianna De La Garza said in the video. "They end up going home." She might be right, although Garrett's safe one more week thanks to this pretty good date.

Garrett didn't say anything about the episode on his Instagram, but his dog seems to approve of it, per his Instagram story. And as for the question of whether naked — or near-naked — bungee jumping is strictly a Latvia thing, it turns out that it's not particularly. As Romper reported, you can go jump in the nude anywhere in the world, and it's not particularly a Latvian tradition. However, on Valentine's Day, nine couples made a naked jump in Latvia in "below-zero temperatures," as reported by The Telegraph, making headlines. It seems like the show was trying to make it out to be more of a tradition than it really is, though it does seem like some other Latvian activities involve nakedness, so it could be.

If you watched the episode, you of course know that Luke P. was not happy with the naked bungee jumping, tradition or not, even though it was none of his business. But you know he had to say something about it, forcing Hannah to become upset and cancel yet another cocktail party. His gaslighting and word-twisting were enough to make anybody watching scream, and poor Hannah kept him on for another week. Mister "Your Body Is a Temple" might live to see another day, but by the looks of it, him and his archaic ways are going to get in a fight with Garrett next week. Poor boy didn't take his advice to have sweet dreams, and might be a tad cranky.