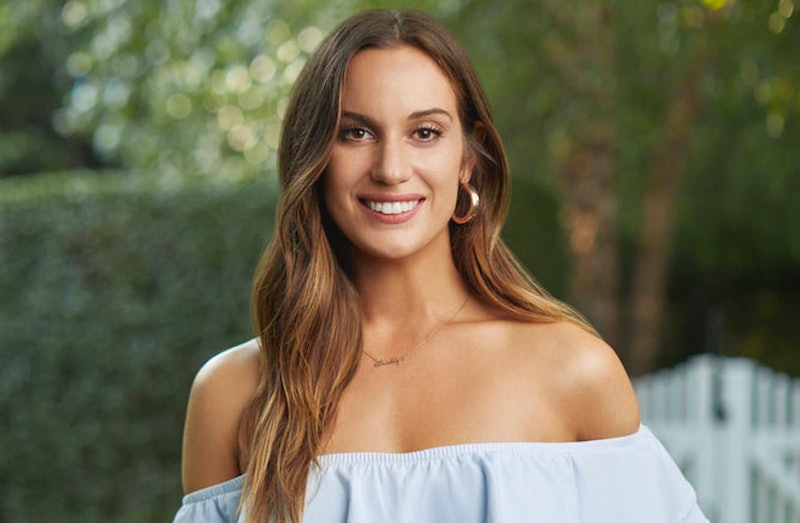 Going to The Hamptons is a total change for Summer House star Hannah Berner. She said in the show's premiere that she's used to spending the warmer months with her parents on New York's Shelter Island. But the self-professed "ratchet girl from Brooklyn who speaks her mind" switched things up on the Bravo show to have a little more fun with her friends.

Hannah in't the only Summer House newcomer. She joined the show with Paige DeSorbo and Jordan Verroi, whom she knew from work. All three of them worked for the Betches brand — Paige as a writer, Jordan in client relations, and Hannah as a creative video producer, according to their LinkedIns. But Jordan and Hannah have since moved on. According to her LinkedIn page, Hannah left Betches in November 2018, and in addition to appearing as a Summer House cast member, she works as a host for her podcast Berning In Hell. According to the description, here's what it's about:

"Host Hannah Berner gets her guests to open up about their own personal hell. She interviews comedians, reality stars, and influencers who are admired for their good looks, massive followings, dream jobs, and luxurious lifestyles but Hannah proves that we all have demons. You’ll laugh and cry listening to guests open about their biggest insecurities, fears, and anxieties. The devil works hard, but Hannah works harder."

She sure does. According to her Bravo bio, Hannah also "works as a video producer, writing, directing, editing and acting in viral comedy videos." She's the total creative package. Her Instagram, however, is lacking a bit in creativity, because it's mostly reposts of her tweets. They're funny tweets, to be sure, but you really only need to follow her on either Instagram or Twitter to get to know her — not both.

And while Hannah may be in the reality TV/podcast game now, she wasn't always in media. For the first 22 years of her life, she was a competitive tennis player — even starring on the University of Wisconsin team, according to her Bravo bio. But she said on the Summer House premiere that she eventually decided to take her life in another direction. She still plays for fun, though, and to help her let off steam. For example, on the show, she asked Jordan to hit balls with her for 10 minutes in the morning to calm down from a stressful first night in the house.

Don't get it twisted, though, she and Jordan are just friends who used to work together. "Jordan is not my boyfriend," Hannah was careful to say in the premiere. And while she may not be interested in him, that doesn't mean she doesn't have an eye on anyone in the house. In the premiere it seemed like Hannah got along really well with Carl Radke — which could potentially be a problem, because her friend Paige was sorta into him too. Drama, drama, drama. Keep tuning in on Mondays on Bravo to see if Hannah can find a creative way out of that potential mess.