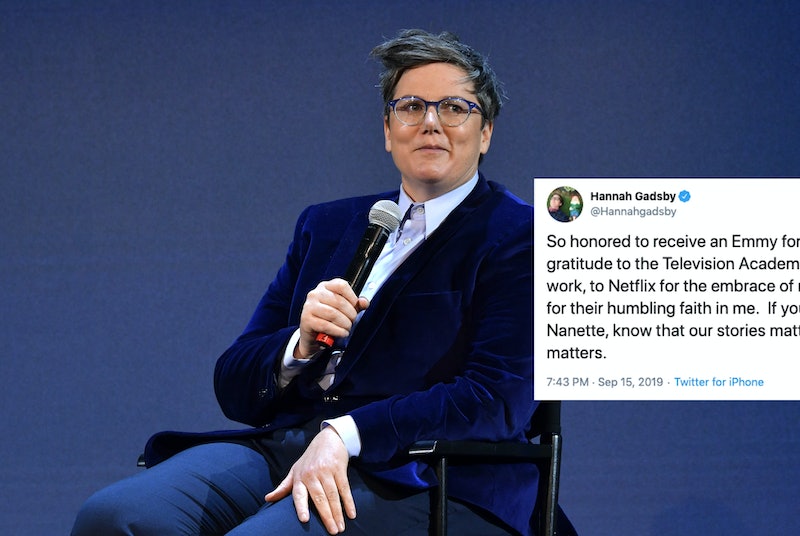 It's been over a year since Hannah Gadsby's comedy special Nanette dropped on Netflix back in June 2018, but it's something the beloved comedian continues to receive praise for — this time in the form of an Emmy during the Television Academy's 2019 Creative Arts Emmys Awards over the weekend. After taking home the award for Outstanding Writing in a Variety Special, Hannah Gadsby reacted to her Emmys win on Twitter with a heartfelt message to fans that'll make you love her even more, if that was even possible.

A significant portion of Gadsby's special centered around personal details about her life, particularly in regards to her coming out and the struggles she faced, both from others and herself, while coming to terms with her identity and worth, realizing that she deserves a place in this world. Her life matters. Her story matters. Gadsby's thoughts and intellectual anecdotes instantly resonated with a number of people on a global scale, prompting the special to become a worldwide success and must-see sensation last summer.

To see Gadsby get honored for those efforts is incredible and well deserved. And it seems she is equally thrilled to receive such praise and wants to share her win with all of her fans who found strength in the project — a sentiment that is reflected in the message she tweeted out on Sunday, Sept. 15.

"So honored to receive an Emmy for Nanette," she wrote. "My gratitude to the Television Academy for recognizing my work, to Netflix for the embrace of my vision & to my team for their humbling faith in me. If you found strength in Nanette, know that our stories matter; our humanity matters."

Just leave it to Gadsby to drop some inspirational remarks and words of comfort on us when we least expect it. The world needs more Hannah Gadsby in it, and thankfully that's precisely what the world is going to get. Despite the fact that she repeated multiple times in Nanette that she planned on quitting comedy, Gadsby went on a comedy tour this year, titled Douglas, that started in Australia and continued throughout the United States. This included stops in Los Angeles, Washington, D.C., and Philadelphia.

"I have some news... I'm going on a world tour with a brand new show that I've called 'Douglas,'" she tweeted to her followers back in February when the tour was first announced. "So no... I haven't quit comedy."

Gadsby later revealed in a statement, per Entertainment Weekly, back in May that her Douglas special would hit Netflix sometime next year. “I’m so excited to announce today that Douglas will be released on Netflix in 2020,” she said at the time. “I’m really enjoying touring with the live performance, but there will be places in the world that I won’t be able to visit, so it’s wonderful that Netflix will bring the show to every corner of the globe.”

Needless to say, Gadsby is certainly keeping herself busy these days and will hopefully continue to educate fans through her humor and astute observations about the world for many years to come. If that (and her Emmy win) isn't cause for celebration, then what is?