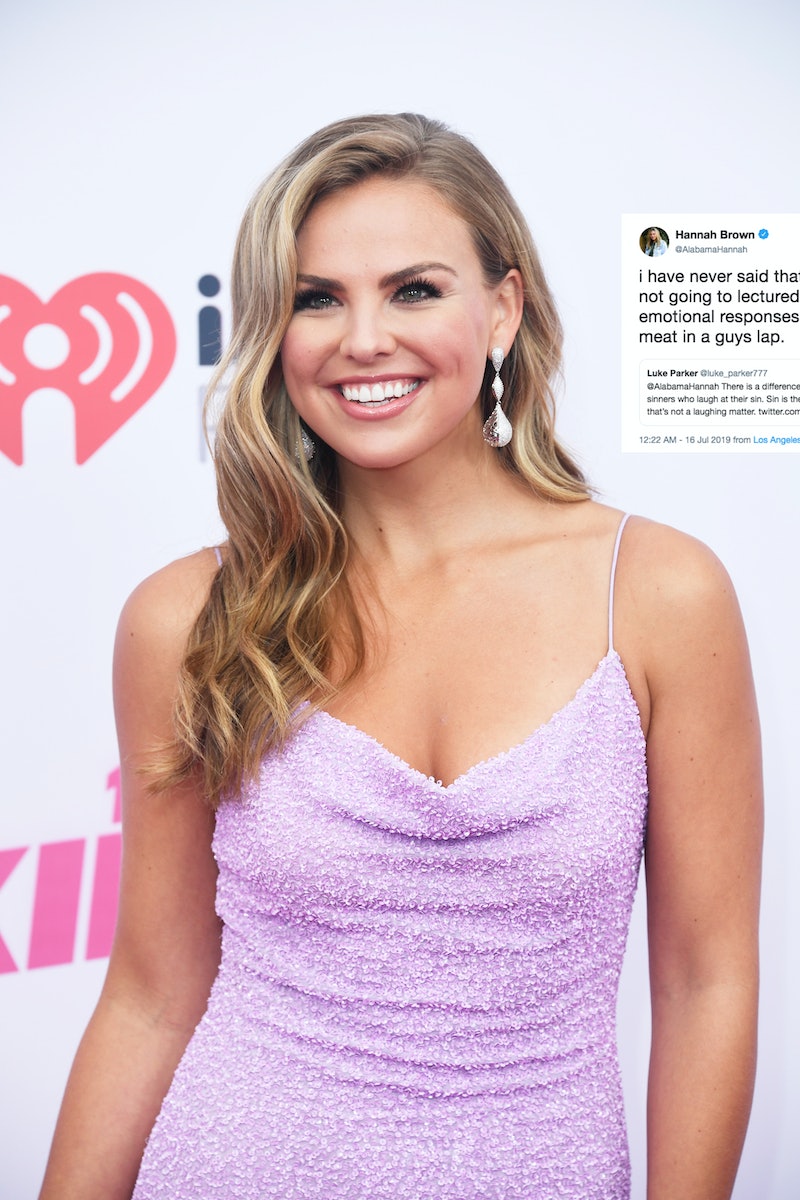 On Monday night, The Bachelorette fans got what they've been waiting for all season — and it was just as epic as everyone had hoped. After he tried to tell her that she shouldn't be having sex in the Fantasy Suites, Hannah Brown finally sent Luke P. home, and she went off, even tossing Biblical references back at him. But it didn't stop there. Hannah and Luke's Bachelorette fight continued on Twitter well into Monday night, and other members of Bachelor Nation ended up getting involved, too.

In case you missed the episode — and honestly, if you did, you should definitely watch it, because this smackdown is so worth it — basically, when Hannah and Luke sat down for dinner on their Fantasy Suite date, Luke told her that he wanted his marriage bed to stay "pure," and if she had slept with any of the men on the show at that point, he'd want to go home. Hannah's response was pretty solid — she let him know in no uncertain terms that she did not owe him anything.

But as the episode aired, Luke chose to to take to Twitter after opening the account earlier the same day to share that he definitely hasn't changed his stance on this. He tweeted that he was "weeping" at his sin while Hannah was "laughing at hers," and that he was upset for them both. Sigh.

Hannah responded, writing, "I have never said that I find my sin funny. I'm not going to be lectured on appropriate emotional responses by a guy who threw deli meat in a guy's lap."

Ah, yes, the Garrett fight. Things were simpler then...

Of course, Luke insisted on responding to this tweet, referencing Hannah tweeting about having sex with Peter in the windmill and told her if she wanted to talk further, she'd have to contact him directly.

But this is Hannah we're talking about, and she got the last word. She wrote,

"The devil wants to shame sin. God dealt with shame when he dealt with sin, so I will not allow someone who comes in the name of God to bring me something that God has taken off me."

Several Bach alum jumped in to defend Hannah, so it's pretty clear whose side everyone is on. Both Tyler C. and Dylan were among them, as far as men in Hannah's contestant pool go. Then again, since when would any of her contestants pass up the opportunity to root against Luke?

Former Bachelor Nick Viall had to call Luke out for the many, many times he's talked about God coming to him in the shower to tell him to change his ways:

And Demi Burnett, who was on Colton's season of The Bachelor with Hannah, couldn't have been more proud of her friend.

It was so satisfying to see Hannah stand up for herself, and it's even better to see that so many people have her back. The way Luke spoke to her was not OK, and it's probably safe to assume that the remaining men won't miss him now that he's gone.