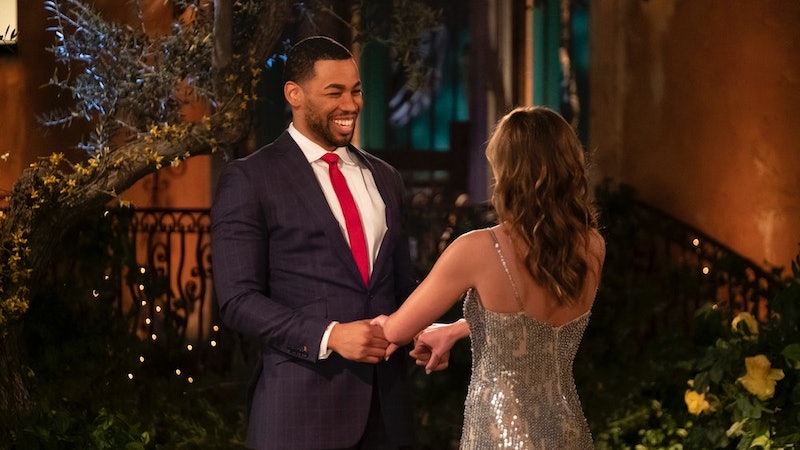 It sounds like a certain pop star is one step closer to getting a rose. The Bachelorette’s Hannah Brown said she would support Demi Lovato and Mike Johnson if they wanted to date now that the show has come to an end. In an interview with Entertainment Tonight after part two of the season finale, Hannah revealed that she would totally be up for playing matchmaker between the two.

Lovato, a new Bachelorette stan who was present during the live finale taping, has made her affection for fan favorite contestant Mike well known on social media throughout the season. Now, much to the delight of Bachelor Nation, Hannah has revealed that she supports the coupling of Mike with her new pop star friend. “I definitely have the hookup for Demi if she wants to be with Mike," Hannah told ET. "I would give her my blessing."

Lovato, a well documented Bachelorette fan, has made it clear that she is strictly Team Mike in the hit reality series. Prior to being sent home on week eight, Mike and Hannah went on a one-on-one date, and of course, Lovato couldn't stop gushing over Mike on her Instagram Story. In a video, she captioned footage of the contestant with, “Mike I accept your rose.” In the background, she gushed, “His smile! And his eyes! He smiles with his eyes. And he always picks her up and swings her when he hugs her. Swing me! Kiss me!"

Lovato’s crush led to full on shipping from fans. And, on July 18, Mike finally caught wind of Lovato’s affections and responded to the singer with "100 percent interest." At a taping for the show’s Men Tell All special, the fan favorite told US Weekly that he would be interested in taking Lovato out on a date. "I’m flirting with her too. Tell her, 'What’s up, baby?'," he told US Weekly. “I would definitely take her out for an initial date, yeah. 100 percent not scared about it at all. I would be like, 'Oh my God! Girl, come here.'"

On July 30, the singer upped her Bachelorette fandom game when she made a surprise appearance in the audience for a taping of the finale. The pop star sat next to Bachelor alum Demi Burnett, and on Instagram, Lovato even shared a picture of herself posing with Hannah as the two celebrated the finale with windmill cookies, a nod to the Bachelorette's infamous Fantasy Suite date with Peter. “I interrupt this social media break with this very important and iconic snap shot of WINDMILL cookies with my new favorite person @alabamahannah,” she captioned the Instagram post. “and quess what... Jesus still loves us. 🤷🏻‍♀️😝 Tonight’s the season finale y’all.. make sure to tune in cause it’s gonna get crazy!!”

Unfortunately, Lovato’s crush Mike wasn’t on hand for the finale taping, so there wasn't the opportunity for a proper introduction. Rob Mills, senior VP of reality and alternative programming at ABC, told E! News of the missed love connection, "That was a missed opportunity for us with not having Mike there. I think Demi Lovato was sort of an 18th hour thing, but still, we should've had Mike there."

Well, missed opportunity or not, Mike can always woo Lovato the good ole' 21st century way: sliding into her DMs. And if that's not his style, then Hannah is more than happy to help.