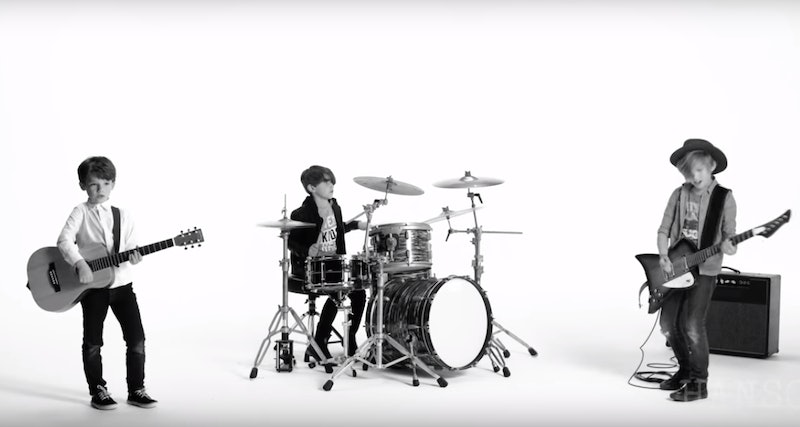 Prepare for some hardcore fuzzy feelings, ladies and gentlemen, because Hanson's "I Was Born" video has been released, and there isn't a single person who can possibly handle the cuteness it's serving up. And though Taylor, Zac, and Isaac are still unbelievably cute in their own right, it's their children who are stealing the show. This is not a drill: Hanson's children in the video for "I Was Born" are the cutest thing I've seen in a long time, and it's exactly what we all needed after such a tough week.

What's perhaps most striking about the video is that it's impossible to see the darling offspring of Hanson without immediately being reminded of the band's own start in the music industry. Aged 11, 13, and 16 when their debut single, "MMMBop" was released, the Hanson brothers were the most adorable blast of pure talent to hit the pop industry back in the '90s. But, they weren't just cute, they were also skilled songwriters and performers, who proved that children shouldn't be underestimated just because of their age.

So, it feels full-circle for the band to give their own kids a chance to express their own talents in this video, just as Hanson was given that platform 20 (oh god, I'm old) years ago.

And if you're already a blubbering, cooing mess over the video (same), then prepare to hit peak swoon over what Taylor Hanson thinks the "I Was Born" video represents. Speaking to NPR, Taylor (who is my perennial crush, just FYI) explained,

"The video is about celebrating the dreams that we all have and the pure optimism of the human spirit. And what better way to show that optimistic view of the world than through the eyes of children? For 25 years, we have been able to live out what we feel we were 'born to do,' and this song brings that message full circle."

Oh hey, sorry, I just have something in my eye right now. Deep breath... OK, and we're back. Not only is "I Was Born" the kind of upbeat, positive song that's become a fixture in Hanson's repertoire both past and present, but the video also reflects that objective too.

Anything that celebrates pure optimism and perpetuates the message that all children deserve the opportunity to live out their dreams is amazing in my books. And if you ask me, Hanson totally nailed it on both accounts.