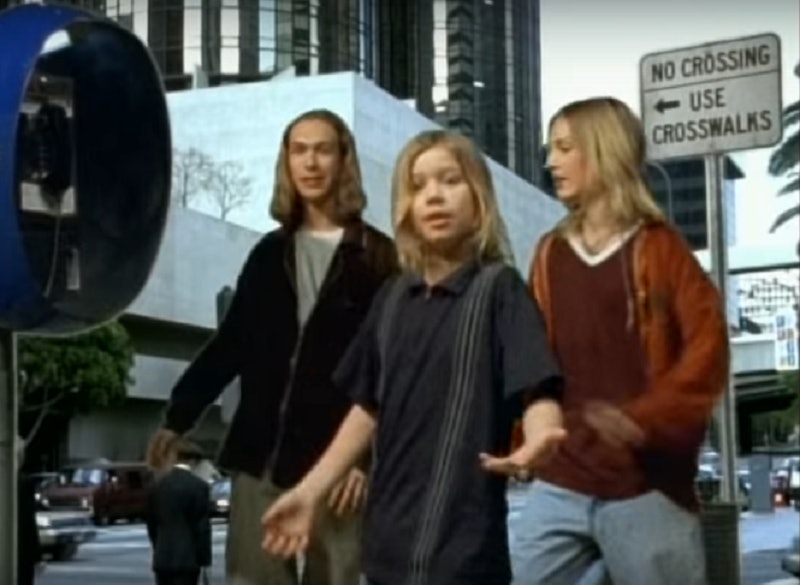 Like many of you, I was a kid when "MMMBop" was released 20 years ago. And something about its divine combination of the ridiculous and the forlorn, those sombre verses hushed tight against the delirium of that euphoric chorus, immediately obsessed me. And from the get-go I had to know: What exactly does "MMMBop" mean? At the time, I remember thinking that "MMMBop" was a measure of time, like a doo-wop finger snap. That it represented a moment that was ferocious, but fleeting. And, because I was a morbid kid with a disconcerting love for depressing poetry, I believed that an "MMMBop" was some sort of a super cheerful death rattle. A last gasp, celebrated in a plume of confetti. Yep, I was one of those kids.

Though my own interpretation about the meaning of "MMMBop" was a little more dramatic than the actual, true meaning of the song, it wasn't actually too far off the mark. But then, somehow, whether they came with the CD single I had of it, or I found them within the pages of a preteen magazine, I owned a beloved copy of the actual lyrics, and when you read them the meaning of the song seems obvious.

With such bleak, philosophical musings in the song as the opening lines, "You have so many relationships in this life/ Only one or two will last/ You go through all the pain and strife/Then you turn your back and they're gone so fast," and the repeated, mournful statement, "when you get old and start losing your hair/Tell me who will still care," the song reveals itself as being something of a nihilistic anthem. Albeit one that, when paired with that exuberant chorus, has a spirited, optimistic edge.

It's basically a panic attack in song form, written by three young boys who maybe didn't have life all figured out, and were trying to smile through their terror of it all. And man, could I relate with those sentiments as a nervous child.

In 2004, Zac Hanson (the cheeky, youngest brother of the three), confirmed to SongFacts that "MMMBop" is about the "futility of life," explaining that,

Things are going to be gone, whether it's your age and your youth, or maybe the money you have, or whatever it is, and all that's going to be left are the people you've nurtured and have really built to be your backbone and your support system.

Which, I can't lie, is pretty deep, guys, and kind of a comforting sentiment to hear from three such angelic cherubs as Hanson were in 1997. But the meaning of "MMMBop" actually has even more layers to it. In an in-depth interview with Vulture about the song in 2016, Hanson discussed the making of "MMMBop," it's enduring legacy, and thankfully elaborated on what the hell it all means.

Taylor Hanson (the dreamy, middle brother of the three), explained that "MmmBop" has "an optimisim that's framed with realism," while Issac (the stoic, older brother) expanded on the idea to suggest that this whole thing is kind of just their flava, saying, "We used to always tease that we write happy sad songs. Maybe some of that came from listening to a lot of old R&B and rock and roll."

If you can listen close enough you can totally hear it in the song. In many respects, the version of "MMMBop" that we all know and love sounds like a rock n' roll song which has been purposefully slowed down, and then sped back up again.

What is incredibly revealing within the Vulture interview is how they explain the songwriting process of "MMMBop." The phrase itself, apparently, was simply one that they were toying with using as a background part for a different song before realizing that it was "really a foreground part." Hanson then explained that they had written the song about what they were going through as a young band who were choosing music over "going to the movies and basketball games" with friends. As Taylor explained it:

There was definitely some push and pull in our relationships, and several friendships where it was, wow, I guess we’re going left and you’re going right, and that’s what the verses were. I really do feel like the secret of that song connecting like it did is that it is more than a pop song.

And that really, genuinely saddens me. It makes me want to send a gift basket of thanks to Hanson for their sacrifices made in the line of duty in creating one of the greatest, and strangest, pop songs the world has ever known.

And really, that's the true meaning of "MMMBop." As a pure blast of sunshine, stained with nihilism, and soaked with sadness, it's also a song that truly defines the realities of childhood. It's full of excitement and zeal, but also a sort of restless, nervous energy that captures the fear of growing up, and the mistrust of adulthood.

In the 20 years since it was released, "MMMBop" has been misjudged and underestimated as being nothing but a silly little pop song, with an infectious, ridiculous hook. Depending on how you feel about the song, it may mean either nothing, or everything. I'd argue that it's definitely the latter. Written by children, mostly for the enjoyment of other children, "MMMBop" represents the briefness of childhood, against the approaching vastness of the rest of your life.

Because here we are, 20 years later, still celebrating the song, and pouring over the song's lyrics and meaning. And why? Because, Taylor was absolutely right, "MMMBop" was more than just a pop song, and I think it meant something pretty significant to all of us who loved the song as kids. Life, childhood, and material possessions might be fleeting. But great pop songs? They live forever.

More like this
Now That 'Renaissance' Is Here, Let’s Revisit Beyoncé’s First Solo Album From 2003
By Grace Wehniainen
Josh Peck Shows Love To Jennette McCurdy After Her Shocking 'iCarly' Revelations
By Radhika Menon
At 14, D'Arcy Carden Was Sneaking Out To Parties & Crying Over Kurt Cobain
By Ivana Rihter
Jennifer Aniston Just Gave Courteney Cox The Biggest Endorsement
By Darshita Goyal
Get Even More From Bustle — Sign Up For The Newsletter