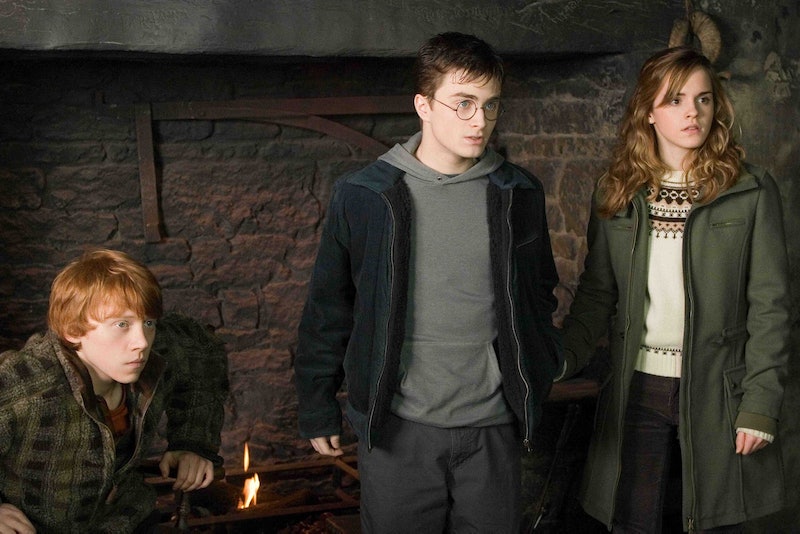 Any true fan of Harry Potter knows that of all the heroic characters, Harry is the worst. Yeah, sure, he's the hero of the story, and he's responsible for the downfall of Voldemort, yadda yadda yadda. But, let's be honest, he spends most of the series whining about how bad his life is without seeming to care all that much about other people who have crappy lives, too (Neville, anyone?). And of all the Harry Potter films, Harry Potter and the Order of the Phoenix was the one that really proved Harry to be the annoying jerk I always knew he was.

For starters, Harry spends pretty much the whole movie whining about people who are only trying to help him. First, he's mad that Ron and Hermione's responses to his letters over the summer were super vague about what they were up to, even though they later explained that they had been ordered by Dumbledore not to reveal anything about the Order of the Phoenix. Then, he's furious about the fact that Dumbledore won't really interact with him, even though he's doing it to prevent Voldemort from realizing the mental connection he shares with the Chosen One and using it to harm Harry. And, as if he wasn't already being ungrateful enough, later he's pissed about Occlumency lessons with Snape, even though those lessons would help prevent Voldemort from planting false visions in his mind. (Spoiler Alert: He Who Must Not Be Named later does just that and a man ends up dead because of it). Like, I'm sorry that so many people are trying to protect you, Harry. That must have been really hard for you.

Harry can also be found acting wounded and sulking in corners for most of the fifth movie. Sure, it was sad that you saw Cedric die, Harry, but you know who it was probably more painful for? His dad and girlfriend. And, sure, it sucks that Voldemort is infiltrating your mind and that your scar hurts a little bit sometimes, but if you refuse to accept the help that is being offered, then you can't really complain about it now, can you?

As if all this wasn't bad enough, Harry spends the whole second half of the movie insisting that, despite all of the Hogwarts professionals trying to steer him in the right direction, it's really he who knows best. Dumbledore, Snape, and Hermione (the brightest witch in her year! Never forget it, Harry!) all warn him that Voldemort could easily use their interconnected minds to plant a false vision. But when Harry has a dream of Sirius Black being tortured in the Department of Mysteries, he refuses to listen to Hermione's warnings and instead drags all of his friends into grave peril.

So, Harry and company arrive at the Ministry of Magic to rescue Sirius, but — surprise, surprise — Harry was wrong, and the only people there are Death Eaters who successfully manipulated Harry's pompous butt and lured him and Dumbledore's Army into a death trap.

Left with no choice but to save his stupid godson, Sirius and the rest of the Order of the Phoenix arrive to fight Harry's battles for him. In the ensuing face-off, Sirius is killed by Bellatrix. Listen, I'm not saying that Sirius' death was Harry's fault, except that's pretty much exactly what I'm saying. Now, Harry gets to feel wounded that yet another adult close to him has died, even though this one was as a result of his own rash actions.

Then, to really nail home the point that Harry sucks, Dumbledore ends up apologizing to Harry for trying to protect him. And, in the film Harry never apologizes to his friends for putting them in mortal peril completely unnecessarily. He's the Chosen One; he doesn't have to apologize to anyone.

At the very least, the movie is actually generous to Harry compared to the amount of whining and moaning he does in the book. We only get a few scenes of it, whereas in the book it felt as though hundreds of pages were devoted to his "why me?" act. And, sure, I'm willing to concede that everyone was an angsty, self-centered teen once. But most teens haven't put their friends in life-or-death situations a thousand times, all while complaining about how hard their life is. Harry has always been the worst, but it took until his fifth year at Hogwarts to really dive into his glaring flaws as a human being.