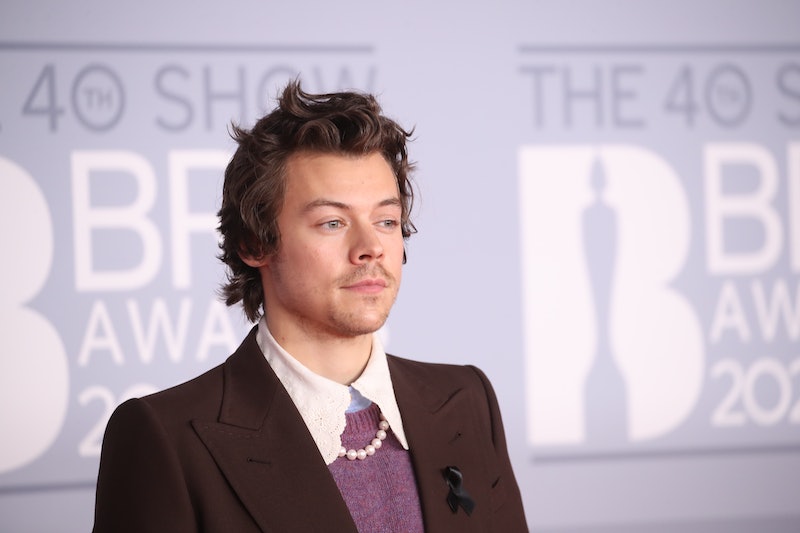 Red carpets may generally be a bit boring, unless it's one where Harry Styles shows up. The fashion-forward singer is known for his experimental style — he's donned a glittering jumpsuit and a Princess Diana-inspired sweater in the past. But Harry Styles' 2020 Brit Awards look might be our favorite look yet, thanks to his fabulous bedhead and the addition of a dainty string of pearls.

The "Watermelon Sugar" singer appeared on the Brit Awards red carpet on Jan. 18 wearing a deep chocolate suit that featured a well-tailored, box cut double-breasted jacket and loosely fitted trousers. Beneath the open suit, he chose a blue button down with a wide lace collar which was then topped with a purple knit sweater vest. As per his usual style, nearly each finger held a different ring, and a strand of pearls was strung around his neck.

His entire ensemble was major with its use of both color and texture, but the singer's hair was perhaps the standout piece of his look. His brunette locks were twisted and tangled in the most luscious bedhead a person can hope to achieve.

Regardless of whether Styles meant for his hair to look disheveled or he truly put on clothes and headed to the carpet, the mix of his tailored suiting, colorful sweater and button down, and mussed hair make for a stellar red carpet moment.

At the 2020 Brit Awards, Styles is nominated for his latest album Thin Line. The former One Direction member garnered nods for both Best Album and Best British Male, and he'll be taking the stage to perform as well.

Even if Styles walks home without any awards, he, his bedhead, and his pearls have already won the red carpet.