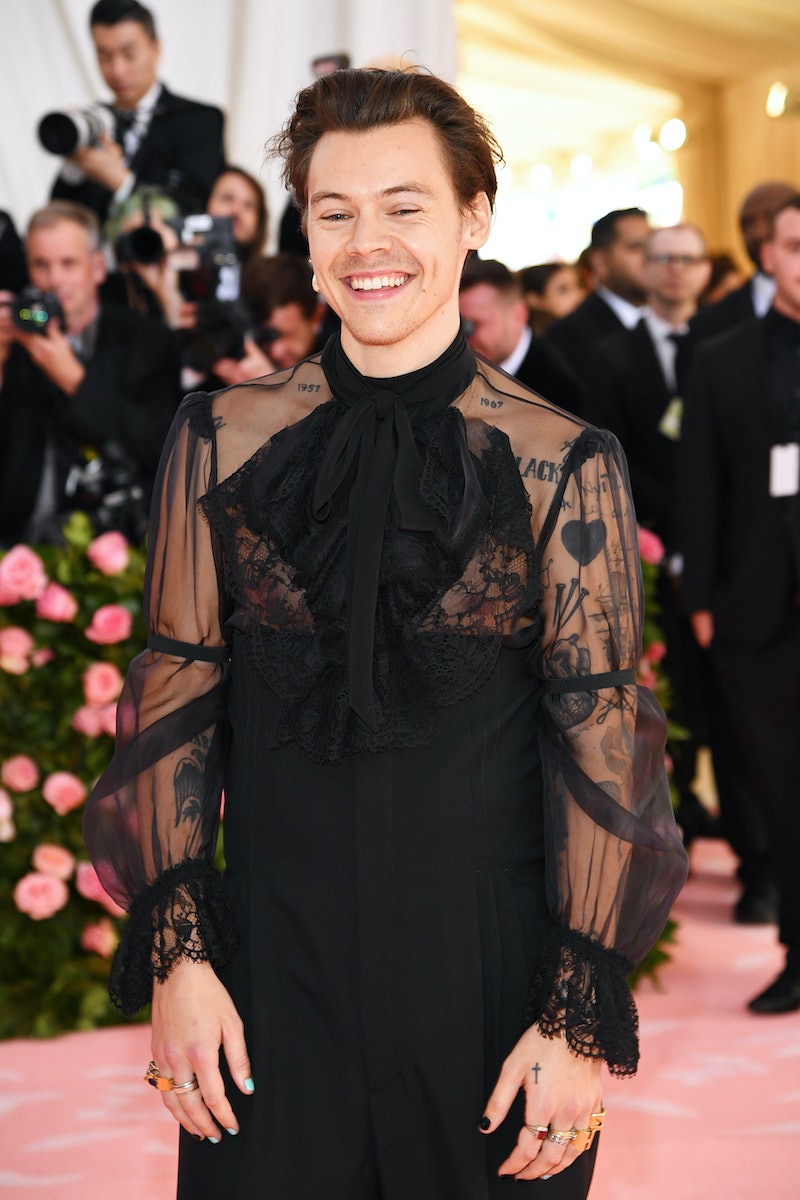 Harry Styles lights up One Direction fans' world like nobody else, and it's about to get a whole lot brighter. Styles is hosting Saturday Night Live for the very first time, and will also act as his own musical guest on the Nov. 16 episode. The singer made the announcement on Twitter on Oct. 24, noting that he'll soon be pulling "double duty."

Despite the fact that he's never hosted, the former One Direction singer has been on SNL four times. He performed with One Direction in April 2012, December 2013, and December 2014, and later returned as a solo musical guest in 2017. During his time in NYC, Styles and his former band members also got in on the skit action. Alongside Fred Armisen and SNL host Sofia Vergara in 2012, One Direction played Vergara's children in a skit. Then, in 2014, the once beloved boy band hilariously portrayed a high school dance team with host Amy Adams as their captain in a skit for Aidy Bryant and Cecily Strong's "Girlfriends Talk Show."

Styles clearly proved early on that he was always meant to host SNL. During his 2017 appearance, he appeared in two sketches: one where he played a Civil War prisoner, and another where he perfectly impersonated Mick Jagger from the Rolling Stones for the Family Feud sketch.

As for the Civil War skit, Styles showed off his musical abilities with Fallon and other cast members. He didn't even break character when he had a beard malfunction. Later, during The Tonight Show With Jimmy Fallon in July 2017, Styles joked that his sketch with Fallon was his "first war movie" before starring in 2017's Dunkirk. Styles' sense of humor and ability to embrace any type of character will certainly aid in his SNL hosting duties.

Of course, since he's also the musical guest, one can't help but wonder if Styles will also debut new music during his episode. Styles released a new single, "Lights Up," in October, which he'll likely perform, but what about his second song of the night? On Oct. 22, he also tweeted in reference to his song "Kiwi" from his self-titled 2017 album, "Kiwi walked so Watermelon Sugar could run." It's unclear if "Watermelon Sugar" is the name of a new song, but SNL viewers just might find out on Nov. 16.

More like this
The Black Lotus Staff Has "Had Enough" In The 'White Lotus' Spoof From 'SNL'
By Brad Witter
Harry Styles Just Split His Pants In Jennifer Aniston’s Face
By Sam Ramsden
Who Is Pete Davidson Dating? He & Chase Sui Wonders Got Caught Kissing
By Jake Viswanath
Hilary Duff's Husband Matthew Koma Has Her Name Tattooed On His Butt
By Jake Viswanath and Stephanie Downs
Get Even More From Bustle — Sign Up For The Newsletter
From hair trends to relationship advice, our daily newsletter has everything you need to sound like a person who’s on TikTok, even if you aren’t.