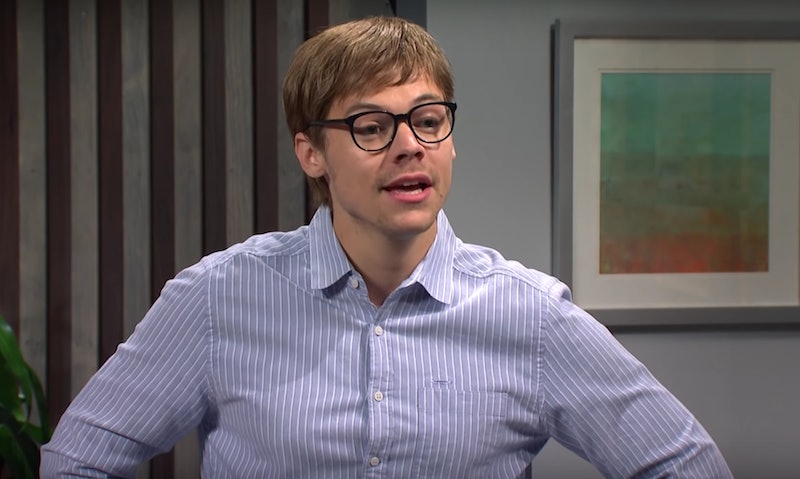 Saturday Night Live has tackled a contentious issue: Popeyes’ chicken sandwich. Harry Styles’ SNL Popeyes sketch invoked Jordan Peele’s Get Out — but for white people. In his first stint as host and musical guest on Nov. 16, Styles jumped into the American sandwich craze as intern Rob in a “Lunch Run” skit: Rob, an intern who hails from the U.K., offers to make a lunch run for his colleagues played by Ego Nwodim, Kenan Thompson, Heidi Gardner, Chris Redd, and Melissa Villaseñor. When he suggests Popeyes' famed sandwich for lunch, however, the proposition proves to be much too ominous for Thompson, Nwodim, and Redd.

When Rob suggests that he head to the establishment alone to grab 15 sandwiches for his colleagues, a horrified Nwodim replies, “You want to go to a Popeyes alone in the middle of lunch rush, then buy up all the chicken?” Rob, a native from England where there is no Popeyes, naively assures his colleagues that he’ll be fine. “I hear there’s a line out the door every afternoon,” he says. “I’m sure they’ll let me cut. I’ll just go in and say, ‘Give me every chicken sandwich you have. I’m in a hurry.’”

Rob’s co-workers still aren’t entirely convinced. He assures them, however, that he’s an intern who gets things done. “I don’t mind yelling if I need to — even if the cashier is a woman,” he says. Rob then tells them that he’ll be able to bring back 15 sandwiches on his own with his “big backpack and long coat.” The skit then concludes with a faux movie trailer that reads, “Jordan Peele presents White Get Out, starring Harry Styles as intern Robert E. Lee.”

The timely skit is, of course, a reference to the Popeyes’ sandwich frenzy that has engulfed cities across America. Popeyes’ infamous chicken sandwich first launched in a limited-time run in August then returned permanently in November. The item garnered a fevered following online and received celebratory write ups in the New Yorker, Time, and more. While it's been hailed as a superior alternative to Chick-Fil-A, the demand for the sandwiches has also been largely chaotic. Violent fights have broken out in various cities as consumers try to get their hands on the sandwich.