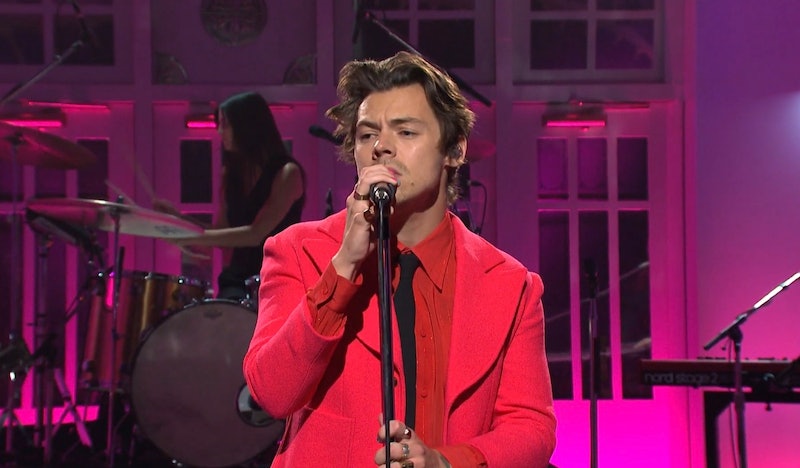 While pulling double duty as both host and musical guest, Harry Styles performed his new single, "Watermelon Sugar," on Saturday Night Live's Nov. 16 episode. The track comes from Styles' forthcoming second solo album, Fine Line, which the singer plans to release on Dec. 13. Wearing a red suit and black tie, the former One Direction band member included a brass ensemble in the number, as he crooned lyrics about not knowing if he can ever go without a "watermelon sugar high." He even got an introduction from actor Jon Hamm, who appeared in the episode's "Days of Our Impeachment" cold opening as ambassador Bill Taylor.

Earlier in the SNL broadcast, Styles also hit the stage in a sparkly deep-V jumpsuit for a smooth rendition of his song, "Lights Up." The singer previously explained the personal meaning behind "Lights Up" during an Oct. 31 interview with British radio network Capital FM: "For me, the song is about freedom. It's about self-reflection and self-discovery and just, like freedom. It feels like very free to me. A couple things that I've thought about and I guess wrestle with a little bit over the last couple years. It's kind of like just accepting all of those things. It's a very positive song to me."

After SNL began its Nov. 16 broadcast, "Watermelon Sugar" officially became available as a digital single, too. Styles previously incited a Twitter frenzy by hinting at the track when he tweeted, "Kiwi walked so Watermelon Sugar could run," on Oct. 22. At the time, many fans guessed the singer was teasing a new single that could perhaps mirror his rock-heavy 2017 song, "Kiwi." When asked about the meaning behind his cryptic tweet during his Capital FM chat, Styles gave the coy reply: "You'll have to wait and find out."

Later, iTunes listed "Watermelon Sugar" as Fine Line's second track — though it remained available for "Album Only" purchase and couldn't be downloaded until it premiered on SNL. (All other song titles are currently hiddne on the track list.) Styles told Rolling Stone in August that Fine Line is filled with the toughest, most soulful songs he's written yet. "It's all about having sex and feeling sad," he explained.

Although this marked Styles' first time hosting SNL, he previously performed with One Direction three times between 2012 and 2014, and returned in 2017 as the solo musical guest. During his first-ever opening monologue as host, Styles gave his 1D "brothers" Niall Horan, Liam Payne, Louis Tomlinson a shoutout, saying "I love those guys." He conveniently "forgot" Zayn Malik's name, however, and substituted it with "Ringo." He also stressed that he's a "serious" artist who places higher importance on music than comedy.

Fans around the globe hoping to see Styles' live performances of songs like "Lights Up" and "Watermelon Sugar" will have their opportunity very soon. Ahead of his SNL appearance, Styles announced on Nov. 13 that he'll travel the world for his "Love On Tour" in 2020. Styles' world tour is slated to kick off in the UK in April and will include stops across Europe before heading to North America. The "Love On Tour" opening acts will include SNL's Nov. 23 musical guest, King Princess, as well as Jenny Lewis and Koffee.

More like this
The Black Lotus Staff Has "Had Enough" In The 'White Lotus' Spoof From 'SNL'
By Brad Witter
Yes, 'The Price Of Glee' Is Available To Watch In The UK
By Catharina Cheung
Hilary Duff's Husband Matthew Koma Has Her Name Tattooed On His Butt
By Jake Viswanath and Stephanie Downs
Watch Kelly Clarkson Sing A Taylor Swift Breakup Song About A Toxic Relationship
By Alyssa Lapid
Get Even More From Bustle — Sign Up For The Newsletter
From hair trends to relationship advice, our daily newsletter has everything you need to sound like a person who’s on TikTok, even if you aren’t.