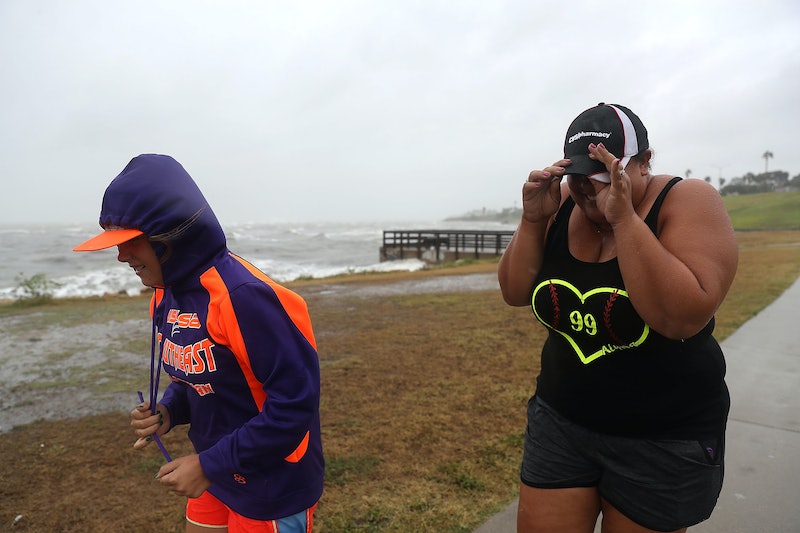 The eastern coast of Texas is bracing for what could be the worst storm to hit the region in years. Hurricane Harvey is expected to make landfall along the Gulf Coast early on Saturday. It's expected to be bad. Cities like Corpus Christi and even Houston are expected to get feet (not inches) of rain, and evacuation orders have been ordered for some parts of Texas. The hurricane has been big news on Twitter, and Harvey 2017 tweets were all over social media by Friday, hours before the hurricane was expected to hit.

As has become part of the norm for large events in our world, people are experiencing a cataclysmic event of nature that could leave hundreds homeless, without power, or worse. Between the advice and measurements of experts, the warning of public officials, sights of locals preparing and evacuating, on the ground visuals of weather, and jokes, there is so much more information about the oncoming storm available to anyone, particularly on Twitter.

During Hurricane Sandy, the last storm to hit, storm trackers noticed how effective social media was at reaching people, especially with the amount of chaos in the affected region as the storm swept in. It looks like Hurricane Harvey will be another superstorm that will play before our eyes on our phones, even as it hits the gulf from the sky. The hashtag #Harvey2017 provides real-time updates about the storm and how people are preparing for it — both seriously and with a dose of humor.

1. The View From Space

Thanks to the wonders of modern technology, you can see what a hurricane looks like from space. The International Space Station tweeted a video from Thursday of the storm near the Texas coast.

2. How Hurricane Harvey Lines Up With History

The last major storm to his Texas was Hurricane Ike in 2008. Its wind speed was lower and its rainfall less than what Harvey is expected to have.

A study of hurricane categories via cats.

4. When Officials Say It's Time To Evacuate, Go!

NASA Earth reminded people to heed the calls for evacuation.

If you're far away from the Gulf Coast, but want to see quite how much the region is being transformed by the extreme weather, this is for you. This picture appears to be of South Padre Island.

Authorities have been telling people in the path of the hurricane to stock up on supplies.

7. The Pride Of Corpus Christi

Corpus Christie, the coastal town that is expected to bear the brunt of the the worst of the hurricane, is also the home of the late famed Tejano singer Selena Quintanilla-Pérez, featuring a museum and statue of her. Most of the residents of the town are evacuating, but they made sure that the hometown hero will make it through OK.

These mesmerizing images from up above show how massive the storm is.

A first, grim look at the impending storm.

It's been two weeks since the president's much-criticized remarks on a neo-Nazi rally in Charlottesville, and it's clear that people on Twitter aren't going to let a little think like a massive weather catastrophe get in the way of digs at him.

Between the massive hurricane hitting the coast and the small earthquake that hit Irving earlier on Friday, Texas has had it hard this week.

Above all, listen to evacuation orders and stay safe.

Hurricane Harvey is expected to make landfall at around 1 a.m. on Saturday near Corpus Christi. The storm could leave a trail of devastation in its wake, and residents in Texas, Louisiana, and other parts of the area that will be affected are making their exit as soon as possible.

More like this
The 15 Best Dresses For Hot Weather
By Andrea Gale Boerem
For These Abortion Clinic Volunteers, Going TikTok Viral Is A Risk Worth Taking
By Audra Heinrichs
5 Differences Between YouTube Shorts & TikTok
By Emma Carey
Jurnee Smollett’s Heart Is Healing
By Rebecca Carroll
Get Even More From Bustle — Sign Up For The Newsletter