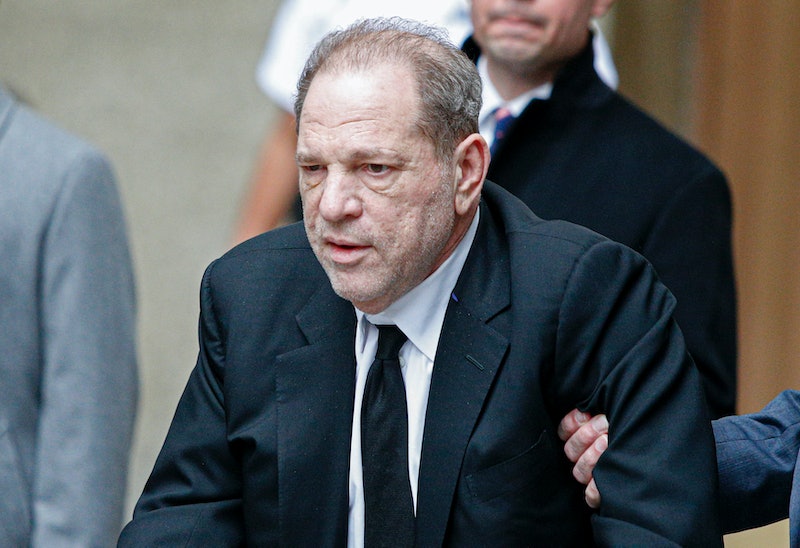 Prosecutors in Los Angeles announced on Monday that former Hollywood producer Harvey Weinstein has been charged with new sexual assault crimes. On the first day of his trial in New York City for similar charges, Weinstein was charged with the alleged rape and sexual assault of two women over a two-day period in February 2013 in California, per Los Angeles County District Attorney Jackie Lacey. Weinstein faces up to 28 years in state prison for those charges if convicted.

“We believe the evidence will show that the defendant used his power and influence to gain access to his victims and then commit violent crimes against them,” Lacey said in an official press release. “I want to commend the victims who have come forward and bravely recounted what happened to them. It is my hope that all victims of sexual violence find strength and healing as they move forward.”

Weinstein has been charged with “one felony count each of forcible rape, forcible oral copulation, sexual penetration by use of force and sexual battery by restraint,” according to the press release from the LA County District Attorney's Office. The former Hollywood producer allegedly raped a woman in her hotel room on Feb. 18, 2013 and allegedly sexually assaulted another woman in a hotel suite the next day, on Feb. 19, 2013. Bustle reached out to Harvey Weinstein’s publicist for comment.

The news comes on the first day of Weinstein’s trial in New York for similar charges of rape and criminal sex acts in 2006 and 2013, respectively, in Manhattan. He faces a maximum sentence of life in prison if convicted of those charges. Weinstein has pleaded not guilty to all charges and has denied the allegations. In statements issued to the press in the past, Weinstein’s rep said “any allegations of non-consensual sex are unequivocally denied by Mr. Weinstein” and that “Mr. Weinstein has further confirmed that there were never any acts of retaliation against any women for refusing his advances.”

Since October 2017, more than 80 women, coined the Silence Breakers, have come forward to detail their accusations against Weinstein. These allegations helped propel the Time’s Up and #MeToo movement forward to empower women to speak out on abusive behavior.

Amid the new charges against Weinstein on Monday, 25 Silence Breakers issued a statement that called the developments a “clear indication that the risks we took and the consequences we subsequently faced were not in vain.” It read, in part, “Today represents a new day in our society. Now is the time to see Harvey Weinstein, and abusers like him, finally be brought to justice.”