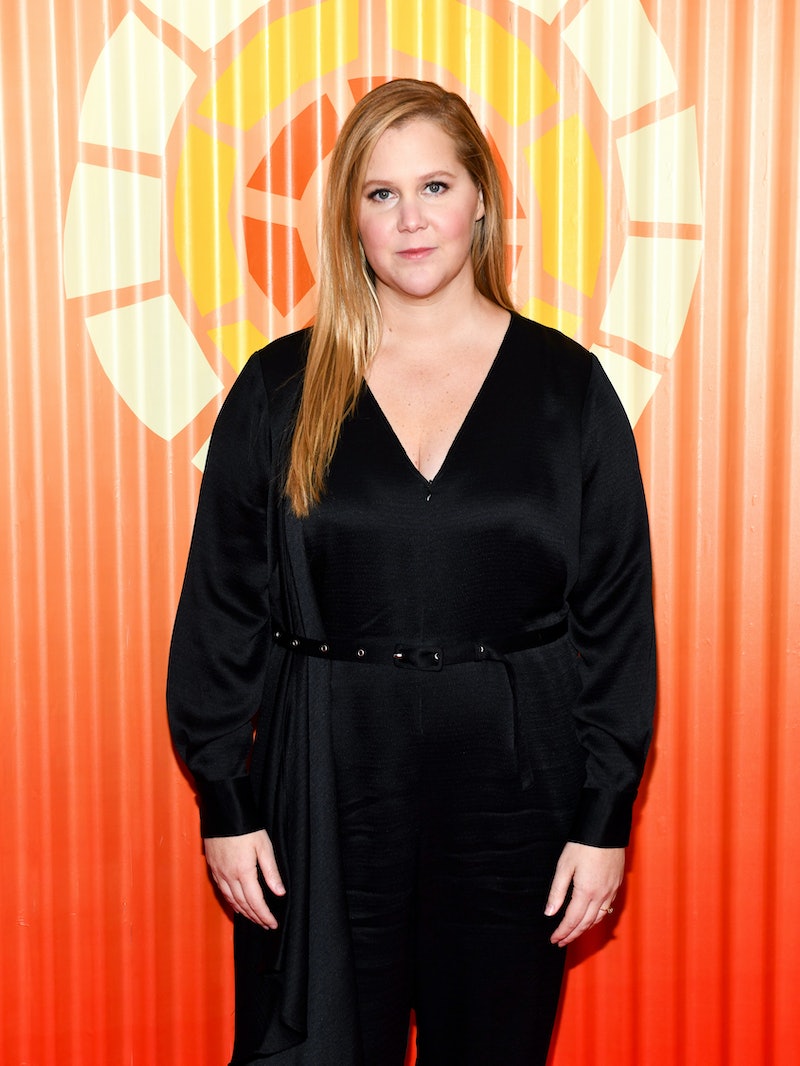 Amy Schumer is known for her candid, open standup persona, but her latest project might actually be her most honest and personal yet. The trailer for Amy Schumer's HBO Max documentary series Expecting Amy was released on Thursday, May 28, offering an intimate, behind-the-scenes look at the comedian as she embarked on a massive tour while pregnant with her son, Gene. "So proud & excited to announce the release of my new docuseries with the talented Alexander Hammer," Schumer wrote on Twitter, sharing the trailer. "[The show is] coming 7/9."

According to Deadline, Schumer and Hammer began filming right after the comedian learned that she was expecting her first child, with husband Chris Fischer. And that touching moment is included in the trailer, with a tearful Schumer sharing the exciting news directly to the camera: "I found out two days ago that I'm pregnant," she said. "I'm just so excited." (Schumer and Fisher welcomed their son in May 2019.)

In addition to chronicling Schumer's difficult pregnancy — she suffered from hyperemesis and was hospitalized multiple times — Expecting Amy also follows the comedian on her 42-city tour, and the filming of her Netflix special, Growing. "We're doing 60 shows ... six-zero shows," Schumer says in the trailer. "I'm doing Vegas, Nashville, Albany and I'm at the [Comedy] Cellar every night," she continued, referring to the legendary comedy club in New York City.

Schumer toured through her third trimester, before announcing in February 2019 that she had to cancel the last leg of her tour due to her pregnancy. "Due to complications from hyperemesis I am not cleared to fly for the next couple of weeks I am going to cancel the remainder of my tour," she wrote on Instagram at the time. "The baby and I are healthy and everything looks good. But I am in my 3rd trimester and I am still nauseous all the time and vomiting." The comedian added that things were so bad that she got sick "every time I ride in a car even for 5 minutes."

Still, Schumer had her husband by her side during the entire tour, and the trailer for Expecting Amy showcases several touching moments between the couple. "Chris really takes care of me," she says at one point, while Fischer helps her out backstage. Later, the exhausted comedian leans up against her husband in an elevator, and jokes that she's too tired to go onstage. "I need you to do my act," Schumer says with a laugh.

The documentary also promises to give fans a look at Schumer and Fischer's February 2018 wedding, including a sweet clip of the couple's on-brand vows. "I'm so happy for you that you found me," Schumer tells Fischer during the ceremony, before the happy couple head off back down the aisle.

While she might be known for her raunchy jokes, it makes sense for her new documentary to showcase a more domestic side of the comedian. "I’m really happy. I was not going to settle," Schumer told Extra about married life with Fischer in April 2018. "I was like, ‘Yeah, I’ll die alone and that sounds fine’ and then I met this dude. He’s really fun, he’s really smart, and I just fell in love with this idiot." Now, with the addition of baby Gene, it seems like Schumer is happier than ever.