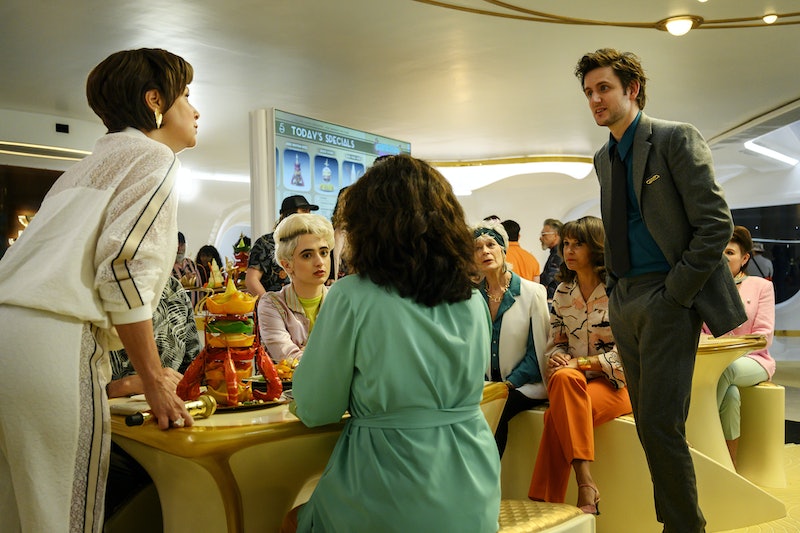 Whether you're on a cruise liner exploring the Caribbean or a spaceship orbiting Saturn, customer service is an essential part of the vacation experience. But what happens to decorum when a luxury trip devolves into a Lord of the Flies-style survival nightmare? Veep creator Armando Iannucci's new HBO comedy Avenue 5, premiering Jan. 19, is a sharply funny exploration of an intergalactic trip gone very, very, wrong.

The space-set comedy takes flight when a technological malfunction changes the flight path of the show's eponymous spaceship, shifting the journey's time frame from a few weeks to a few years. Both the crew and the guests aboard the Avenue 5 don't take the news of the trip's unintended extension well, trading politeness and pillow mints for panic and chaos. For all the ship's extravagances (Yoga! Unlimited buffets! Gold-encrusted interior design!) nothing can change the fact that hundreds of people are now stuck in space for more than a year as they take the long way back home to Earth.

Iannucci, a master of satire with a penchant for putting his characters in miserable situations, boarded a cruise ship in the name of research for his show, which gets to the heart of the hospitality business.

"What happens when you are trapped with people that you have nothing in common with other than you have all paid to go on this holiday?" Iannucci tells Bustle. Despite the impending doom that may await Avenue 5's passengers, they still expect service with a smile — even though it's coming from a staff that's equally as terrified by the ship's uncertain future.

But at what point does a vacation officially turn into a years-long nightmare? "Do the staff have to tidy people's rooms? Do the people in economy stay in economy? Do the people that have paid for all-inclusive still get everything free?" Iannucci muses. "The system starts to break down... then you start asking yourself if there are any rules at all."

In the midst of chaos, people turn to leaders and small comforts (towel swans and all) to assure them that everything is going to be okay. Unfortunately for the passengers aboard Avenue 5, the people who are supposedly in charge of keeping them alive are grossly incompetent. The dashing Captain Ryan Clark (Hugh Laurie) might not be who he says he is, the ship's owner Herman Judd (Josh Gad) is a blundering billionaire buffoon, and second engineer Billie McEvoy (Leonora Crichlow) is trying to step up after the lead engineer becomes a casualty of the ship's plot-inciting malfunction.

Then there's the dead-eyed customer service specialist Matt (Silicon Valley's Zach Woods), whose nihilistic worldview makes it nearly impossible for him to make the passengers feel better. "He is trying his best but, in his view, this is an incredible opportunity to enjoy the chaos, to rip down all the artifice and see what lurks behind it," Woods says. His inability to assuage any of the anxiety onboard is juxtaposed by the relentlessness of passenger Karen (Rebecca Front), who struts around the ship in a variety of sweatsuits with undeniable "Can I speak to your manager" energy. She quickly becomes the leader of the passenger mutiny, leading her charges in asserting that despite grisly deaths and escalating tensions on board, passengers are on vacation and deserve the high standard of service they were promised.

Avenue 5 suggests that customer service brings out the worst in people, emboldening otherwise kind and logical humans to scream at staff members and throw fits over tiny inconveniences. It's a phenomenon that has been written about extensively — David Foster Wallace famously detailed his experience being waited on on a cruise, describing the slippery slope of customer expectation that runs from appreciating an out-of-the-ordinary pampering to considering turndown service an absolute necessity. But whether you'd prefer a hot towel to calm down after screaming at spaceship management or the catharsis of a nihilist customer service rep telling you he's just as fed up and clueless as you are, Avenue 5 will make you feel right at home.

More like this
Laenor’s Fate On House of the Dragon Differs from The Book In One Crucial Way
By Kadin Burnett
Rhaenyra's Sons May Not Last Much Longer On 'House Of The Dragon'
By Grace Wehniainen
How Much Are The 'Schitt’s Creek' Stars Worth?
By Hugh McIntyre
These Memes & Tweets About Alicent in 'House Of The Dragon' Prove She's The Queen Of Messiness
By Grace Wehniainen
Get Even More From Bustle — Sign Up For The Newsletter