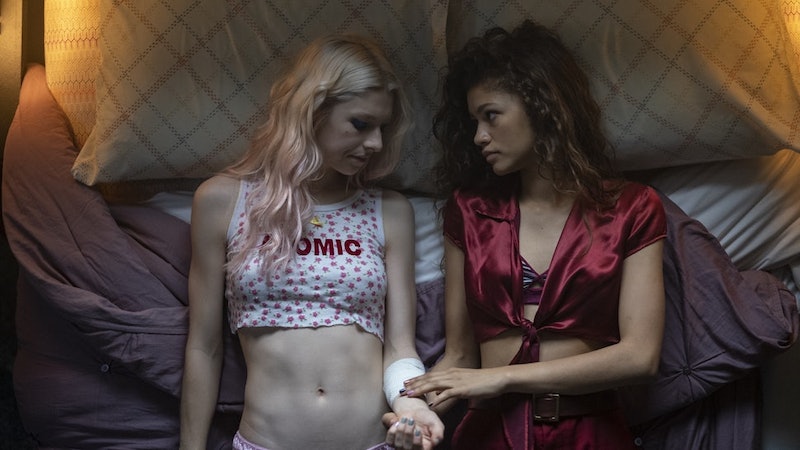 Spoilers ahead for Season 1, Episode 5 of Euphoria.

In Euphoria's July 14 episode titled “‘03 Bonnie and Clyde," the HBO show tackles a difficult subject — domestic violence — by showing the series of events that take place after Nate gets angry and chokes Maddy. But it in doing so, it takes a decidedly less definitive stand on whether teenage sex and violence in Euphoria is something to be glorified or just an unfortunate reality for many.

The show portrays the violence that took place between Nate and Maddy as problematic and, as one cop says to her, "the person that did this doesn't love you." But it fails to take on the same tone when it comes to the statutory rape and uncomfortable sex that takes place in almost every character's life. Underage characters having sex with adults is presented as empowering in the show, even though the teenagers who are involved clearly receive no pleasure from the acts, but instead view sex as a means to feel better about themselves. It feels like physical violence is where Euphoria draws the line and points out that behavior is harmful.

The character Kat is a good example of this. She has gone from a virgin who's insecure about her body to someone who's realized that there's “nothing more powerful than a fat girl who doesn’t give a f*ck,” is a direct result of her sexual experiences. These experiences include being filmed without her knowledge while having sex, watching a middle-aged man masturbate via webcam, sleeping with a man who graduated from her high school years ago because she's hurt by a crush's rejection, and finally giving oral sex to a stranger she meets in the mall in his car. In nearly every scenario, the show makes it clear she's not entirely sure she wants to be engaging in these sexual acts. But is this supposed liberation at Kat's own expense? Is she equating empowerment only with her sexual worth?

Dr. Jane Greer, a marriage and family therapist specializing in sex and relationships and author of What About Me?, tells Bustle that to truly feel empowered by sex, you should feel physical pleasure without guilt, anxiety, or feelings of worthlessness. When these negative emotions happen during sex, they can leave you feeling worse than you did before the encounter. "If you can have sex with someone, enjoy yourself on a physical level, and feel pleasure, this can enhance your self-esteem," she says. But if someone has sex that they don't genuinely want to be having in an attempt to feel better about themself, they're unlikely to walk away feeling like they've gotten what they wanted. "If you feel like you’re being used or just going through the motions or if you take no sexual delight or pleasure in the act, then this can have a negative effect on your self-esteem," Greer says.

On the other hand, some experts say that you don't always have to physically enjoy a sexual experience for it to be fulfilling in some way. "You can learn about what's healthy for you by paying attention to how you feel afterward," Jill Whitney, LMFT, a licensed marriage and family therapist with specialization in sexual decision-making, tells Bustle. "If you have meh sex but have cuddly, happy feelings about the person afterward, that's healthy sex, even if the sex itself may have been disappointing," she says. But in order for the sex to be truly empowering, you have to walk away with genuinely positive emotions. "If instead you wake up feeling used, or disappointed [...] that's a big sign that the sex wasn't right for you," she says. But none of the characters in Euphoria seem to feel fulfilled enough because they find themselves normalizing abusive sex again and again.

Similarly to Kat, Jules goes through a sexual experience that she does not enjoy. In the first episode of the show, Jules, who's underage at 17 years old, is raped by the middle-aged Cal. While she is shown pursuing this encounter, she cannot legally consent to the act, and is visibly upset when he violently penetrates her without any concern for her comfort. The act brings her no pleasure, but leaves her shaken and still searching for the connection she's been looking for.

Despite the clear statutory rape component, Jules's repeated efforts to find some kind of fulfillment through sex that she does not enjoy are destined to fail. "As an adolescent, you’re still developing emotionally and sexually," Greer says. "Using sex as a vehicle to develop self-esteem and self-worth, rather than developing these things through healthier outlets, can put you in jeopardy of continuing to use sexuality as a means of boosting your self-esteem in the future." While Euphoria makes light of this pattern and shows Jules dreaming about finding love after discovering another stranger to text online, trying to be empowered through sex that isn't pleasurable at all could lead to mental health issues for some people. "This could potentially put you at risk of feeling like — or being treated like — a sex object in future relationships, rather than feeling good about yourself and what you bring to the relationship other than sex," Greer says.

Unfortunately, Jules is not the only character who is a survivor of statutory rape. Maddy also had a sexual encounter with an adult while she was still underage. Episode five focuses heavily on Maddy, who's been one of the more sexually active characters in the show. It's revealed through a montage and a voiceover from Rue that she did not lose her virginity to Nate, as she said to him. Instead, the truth is much more horrifying. "The truth-truth is that when she was 14 on vacation in Panama City Beach, she met a guy who was, like, 40. Which in retrospect seems kind of rape-y and weird, but honestly, she was the one in control," Rue says behind the image of Maddy laying on the beach in a bikini covered in cherries. While the show promotes this idea that Maddy was the one in power in this situation — and she's characterized as someone who gets what she wants and can manipulate men around her, like Nate — experts say it's an illusion.

"Teen bravado is not ‘control’ or agency," Rev. Sheri Heller, LCSW, an addiction and complex trauma therapist with specialization in trauma incurred through rape, incest, and sex trafficking, tells Bustle. A 14-year-old is not in control, even if they seem to be. "They are undergoing a turbulent developmental stage of cultivating a sense of identity and autonomy while remaining dependent on adults for care and guidance," she says. "An adult who exploits the vulnerability of a 14-year-old girl to receive sexual gratification is a predator." While a teenager might feel powerful in a situation like this, that's not actually the case. The developmental divide between them and an adult creates a massive disconnect, and the teen's vulnerability sets them up to defer their power the predator, Heller says.

Maddy's carefully curated in-charge persona has its cracks. Even though she uses sex with Nate to get what she wants, she genuinely cares about what he thinks of her. At the carnival in episode 4, she arrives in a revealing outfit, thinking that this is what he wants from her. But her vulnerability shows when he yells at her for wearing this. No matter how much control she thinks sex gives her, Maddy is still vulnerable when someone is upset with her — both emotionally, and physically, as is clear when Nate chokes her.

Plus, the sex that Maddy has with Nate clearly isn't pleasurable for her. In the scene where she sleeps with him for the first time, she's visibly bored. "That's the thing with guys like Nate," Rue says in the voiceover. "They don't actually want a person. They want something they can own."

But it seems that characters in Euphoria are quick to defend their generation. “I know your generation relied on flowers and father’s permission, but it’s 2019, and unless you’re Amish, nudes are the currency of love," Rue says in one episode. "So stop shaming us." The thing is, teens being sexually active is not the moral outrage to worry about. Instead, it's the message that unhealthy, illegal, or unwanted sex is empowering. There's a big difference between a 17-year-old having safe, consensual sex that feels good to them and a 17-year-old being statutorily raped in a hotel room, suffering intensely, and writing it off as normal.

Maybe Euphoria is trying to show that teenagers sometimes look for fulfillment in the wrong places. Even though Rue seems set on continuing to do drugs in the first episode, she slowly begins to realize that using them to help her manage her feelings is not sustainable. But when it comes to realizations about the fact that unfulfilling or harmful sex isn't good, nobody has yet to reach that discovery. It seems like the discomfort is part of the point, for the show. “In terms of the sex scenes ... you want to allow for the awkwardness and the discomfort to bleed into it.” show creator Sam Levinson said at an ATX Television Festival panel. But uncomfortable (or even abusive) sex scenes that transition into showing characters feeling great about themselves afterwards promotes the idea that this kind of sex is fulfilling and healthy. Teenagers really do find themselves in situations like the ones in Euphoria. But many of them also never have sex in high school or instead, have fulfilling sex with partners their age, and characters like that are not represented on this show. This is a dangerous message because it suggests that there is only one "right" way of having a relationship with sex as a teenager.

Hopefully, as the season unfolds, Jules will meet someone her own age who is considerate of her, Maddy will begin to see herself as someone worthy of healthy love rather than as a sex object, and Kat will find fulfillment in sexual experiences that she actually wants to have. Sex is not just a means to fill an emotional void, as Euphoria shows in these storylines. It can be truly empowering if done safely and respectfully.

More like this
12 Aphrodisiac Desserts To Spice Up Your Valentine’s Day
By Kaitlyn Wylde
What Is Pamela Anderson’s Net Worth? She Was Never Paid For Her Stolen Sex Tape
By Hugh McIntyre
12 Anti-Valentine’s Day Memes For People Who Are So Over Romance
By Meghan Bassett
My Partner Wants Me To Wear A Diaper During Sex. Help!
By Sophia Benoit
Get Even More From Bustle — Sign Up For The Newsletter
From hair trends to relationship advice, our daily newsletter has everything you need to sound like a person who’s on TikTok, even if you aren’t.