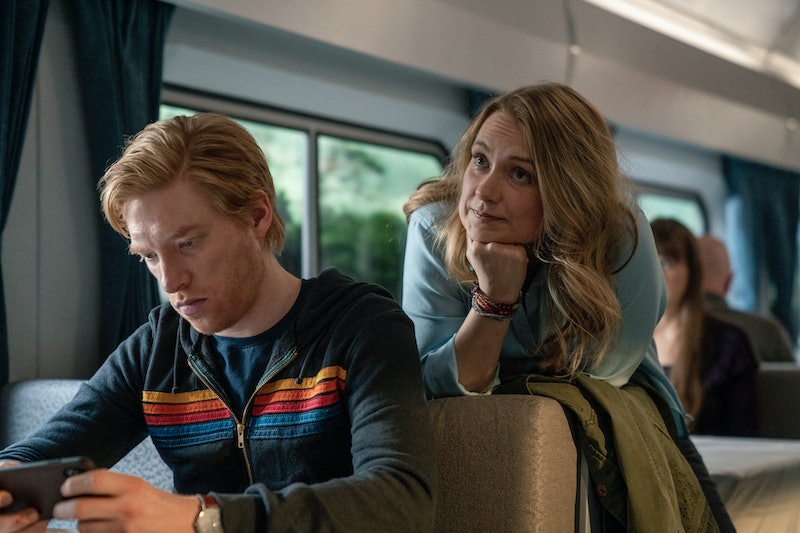 Spoilers ahead for the premiere episode of HBO's Run. At first, the premise of Run seems romantic. In the series premiere, Ruby and Billy — ex-lovers who haven't seen each other in 15 years — meet up on a train headed west out of New York City. It's not a matter of destiny, but design: before going their separate ways in college, they agreed on a code word that, if texted to one another, would cause them to drop everything and reunite on a cross-country Amtrak. That word, sent without elaboration, was RUN.

But run they really don't. Ruby and Billy, played with brio by Merritt Wever and Domhnall Gleeson, ride their way to a thrilling if shallow form of escapism. They abandon their current lives, which we learn little about in the pilot, not to reinvent themselves but to revert back to old forms. Feeling unsatisfied yet lacking clear visions for new futures, they yearn to at least rewind the tape. And while Ruby warns that she's not the same person Billy used to know, she's all too eager to fall back into their practiced schtick. She teases him about his love of baby pigs, which we quickly learn is a decades-old pressure point. In the dining car, she insists he order what she's having to avoid inevitably having to share. For a character who appears so hemmed in by routines — when we first meet Ruby, she's having a bad existential trip about another visit to the grocery store — she's surprisingly delighted to find herself in old ones.

There's such natural chemistry between Ruby and Billy that as we watch them play-fight and evade each other's questions, it's harder to understand why they parted ways than why they would want to meet again. They're as entertained by each other as they are by the versions of themselves that resurface when they're together. Ruby laughs hardest when it's at her own loopy joke, imitating a poop flushing itself down the toilet by falling to the floor. "Jesus Christ," says Billy. "You're still your own best audience."

Except that's not true. In the opening scene of the show, a camera pans the parking lot of a Ralphs supermarket before spotting Ruby in the vast suburban sea. She's on the phone with her husband. They're sorting out domestic arrangements, and she withers under the conversation. She's not entertained by anything, least of all herself. Billy, it seems, is Ruby's best audience, capable of drawing out her best performance.

Which is why, by the end of the first 30-minute episode, the romance of the premise fades. Run isn't a fantasy about opening a new chapter, but reckoning with what's already failed to pass. "You don't think I've changed since I was 19 years old?" Billy asks Ruby at one point.

"Oh, honey, there is always hope," is her completely untrue retort. What Ruby knows of Billy's present life, the one he's built since they last knew each other, she despises. She didn't read his self-help book, she says, because "I didn't want your new career as a prick to make me hate you."

"Run" may have been the signal, but what they're doing now isn't as liberating as the word implies. Ruby and Billy aren't escaping the burdens of their current lives, just hiding them, less excited to be with each other now than to curl back into the shapes of who they used to be.