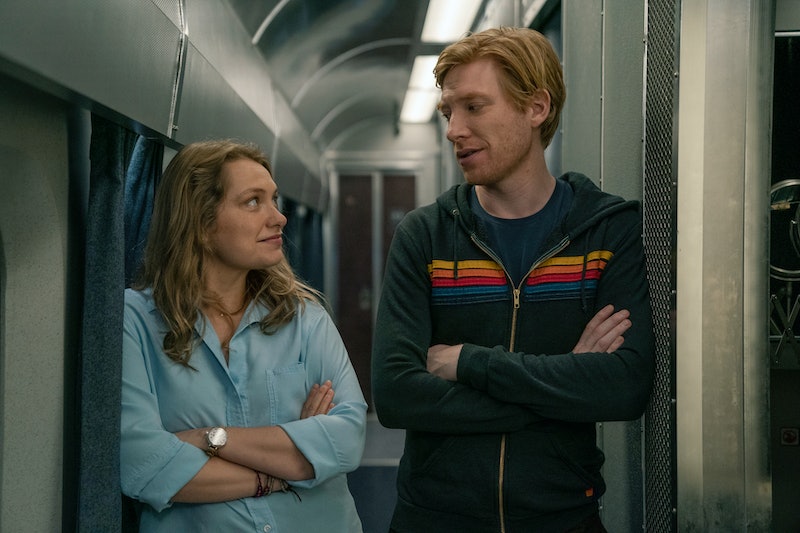 Would you drop everything to rekindle an old flame? That’s the question Ruby (Merritt Wever) faces in the beginning of HBO’s Run. She’s sitting in a Target parking lot when she receives a cryptic text of that eponymous word from her college sweetheart Billy (Domhnall Gleeson). She can either pick up her kids and get home in time to meet the delivery person like her husband asked, or follow through on an old pact and meet Billy at Grand Central Station for a week-long reunion. She chooses the latter.

The show, which premieres April 12, follows the pair of old flames as they embark on a cross-country Amtrak trip from New York to Los Angeles. From the moment they lock eyes at the station, their combative chemistry is searing. No matter how quick they are to roast one another, the lingering feelings clearly run deep. Why else jeopardize everything to see someone you haven't seen or spoken to in 17 years?

“I wanted to write a romance, but [make it] gritty and truthful,” says creator Vicky Jones, who directed the original stage production of Fleabag and co-produces Run alongside Phoebe Waller-Bridge. “What felt really exciting to me was capturing that sense of history between two people, of knowing each other really well and knowing you can really be yourself together, and then coming [back together again].”

“It is quite a wishful idea that your lover is going to be the same as you remember them. In real life it doesn't happen.”

“You have some people in your life who just matter to you in a different way,” Gleeson tells Bustle. “There is some deeper understanding that happens quicker and matters more. I think [Ruby and Billy] have that. They get each other, but they also infuriate each other.”

A lot of the tension arises from Jones’ insistence that Ruby and Billy could not believably have their cake and eat it too. “They are both throwing huge things away [by] coming together and taking a big risk,” she says. “It felt like the world had to happen to them. If you walk away from your life, your life has to come back to get you, because they weren't just running toward each other — they were running away from things.”

Ruby and Billy’s lustful adventure is filled with mishaps. Their Amtrak roomette is a less than ideal setting for intimacy, which leads to awkwardness and very little breathing room. Both of their phones keep buzzing with frantic text messages that jolt them back to reality, and they’re constantly misplacing their train tickets, phones, and jackets.

Despite the initial thrill of seeing each other again, Ruby and Billy must contend with the reality that they might not know each other that well anymore. While all of us have fantasized about texting an ex or being the better off one post-breakup, Run sets this concept on a moving train and throws in some very high stakes. “It is quite a wishful idea that your lover is going to be the same as you remember them,” Jones says. “In real life it doesn't happen.”

Strip away all of Ruby and Billy’s expectations and baggage, and their desire to revisit the past for answers is rooted in a universal fear that this might be their one chance at true love. Was the mistake parting ways all those years ago, or is the mistake trying to come together now? Either way, it’s electric to watch them figure it out.

More like this
Martin Hancock’s Wife Played A Key Part In His Return To 'Coronation Street'
By Catharina Cheung
'The Undeclared War' Took Inspiration From This Gavin & Stacey Location
By Maxine Harrison
Where Was 'Only Murders In The Building' Filmed? The Arconia Has A Different Name IRL
By Radhika Menon
Who Is Liam Neeson's Character In The Obi-Wan Kenobi Finale?
By Kadin Burnett
Get Even More From Bustle — Sign Up For The Newsletter