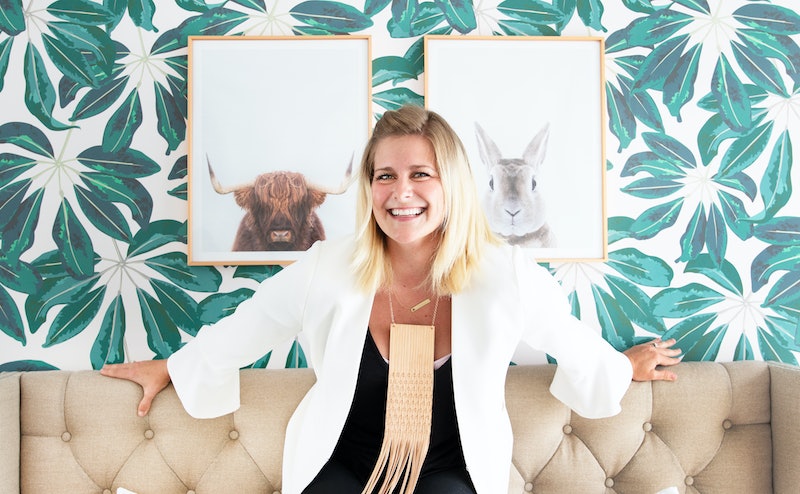 In Bustle’s Q&A series 28, successful women describe exactly what their lives looked like when they were 28 — what they wore, where they worked, what stressed them out most, and what, if anything, they would do differently. Health-Ade Kombucha founder Daina Trout tells Bustle about the life-changing opportunity that helped her start her business, what helped her grow her confidence, and how she wants to build her legacy.

Every kombucha aficionado knows that the power of the probiotic beverage doesn’t come from its delightful fizziness, or its inventive flavors; it comes from the symbiotic culture of bacteria and yeast (SCOBY) that imbues each bottle with live organisms who work their gut-healing magic. For Health-Ade founder Daina Trout, her journey actually started with the SCOBY — the kombucha she’s now famous for, she tells Bustle, was originally “just a byproduct” of a totally different business idea.

“The truth is, we were making kombucha because my husband [Health-Ade co-founder Justin Trout] was losing his hair,” she tells me one morning at the Bustle office. “His dad was bald by 28, so he wanted to stop that from happening. We learned that in parts of the world, they use the SCOBY as a mask on the head” to prevent baldness. (Scientific studies seem to be lacking on SCOBY's effectiveness as a mask: One 2013 study that has since been retracted cited anecdotal evidence of kombucha being used for balding relief; one Into The Gloss writer claimed that using SCOBY as a face mask left her “positively radiant.”) While they were working on that formula, they had the opportunity to sell at a local farmer’s market — only, their hair loss-prevention product wasn’t ready yet. So, they decided to sell the kombucha instead.

Now, seven years later, you can find Health-Ade at nearly any grocery store. The company has grown from two employees — Trout and her husband — to over 300, who work hard to create 14 flavors, including the recently released Tropical Punch.

But Trout says that while she started Health-Ade when she was 30, the work experience that would change her life came two years earlier, when she was 28. In a 28 minute-long conversation (really!), Trout tells Bustle about what her life was like at 28, and how the events of that year helped her found her business.

What was the night before your 28th birthday like?

I remember the outfit I wore on my 28th birthday. It was a blue silk wrap dress. Super chic. I had invested in that birthday dress. I was feeling really excited because I had just gotten engaged a month prior to a man I had been with for eight years [my now-husband and co-founder], and we had just moved to Los Angeles. I was only a year into my first job after grad school. It was a time of a lot of promise and future and excitement, but not yet a lot behind me. No legacy yet. There was a lot still to be written, but we had taken a lot of the first steps to get there.

Where were you working when you were 28?

I worked for GlaxoSmithKline Pharmaceuticals (GSK), the second-largest pharmaceutical company in the world. The first day on that job, I met Vanessa Dew, who was my third cofounder. The stars were kind of aligned for me to work there. As a nutritionist, I was helping sell nutrition-grade pharmaceuticals, which I loved because it was food being used for medicine. It also paid my bills — after finishing undergrad and graduate school back to back, I basically had $200K in debt. I also learned a lot about leadership in that job, which ended up being one of the main drivers of my starting Health-Ade.

I had an independent spirit and wanted to make decisions, but had no capacity to do that on the totem pole, even though I’d worked my way up to managing a larger team. But I got a really interesting opportunity when I was 28. It was right when generics came into play, so pharma companies were downsizing and morale was really, really low. GSK basically picked the top salespeople in each region and asked us to become change agents. We got an unlimited budget to improve employee engagement. So for a year, I traveled around and met with around 300 teams. It was a crash course on leadership and management, on productivity and morale. I had this gift when I was 28 to learn so much about leadership and managing people, which is now 80% of running Health-Ade. At 28, I didn’t think I was going to start a business, but it did show me that I was good at this kind of work.

What were you worried about at 28?

Even though I’d had this great opportunity, I wouldn’t say I was on top of the world. I knew the job would only last for a year. I had to ask myself what I was going to do with that knowledge I’d learned once the job went away. I also was learning a lot about my boundaries as a human being. I was traveling five days a week, eating out all the time, where before I was really regimented, working out all the time and cooking from home. I also was working with people constantly. I had to learn to create balance between work and life.

There was also a source of anxiety in the fact that I was starting to really grow in confidence. In this job, I was able to be good at something that was also meaningful to me, and I got my first taste of having that special skill. That helped me grow my confidence. If I didn’t have that, I don’t know if I ever would have started Health-Ade.

Oh, and I was planning a wedding while traveling all the time, so I literally couldn’t do it. Thank God for my sisters, or else my wedding would have just been, like, tables and chairs.

What advice would you give yourself at 28?

There’s so much I would still tell that girl. Age 28 was my first taste of real, true confidence in myself, but I still had a long way to go. I wasted two years after that second guessing myself. I recognized I had this skill with leadership, but I didn’t do anything about it — I was still very insecure about it. There were a lot of tears at that time. The thing was, I’d already had these talents at 23, 24, 25 — they were already there. The more I became a stronger leader, the more I realized I’ve had those things within me the whole time. At 28, my head was just in the way. I’d want to help her remove the baggage that’s in the way of letting them shine.

What is your biggest goal now, and how has that changed from when you were 28?

Not to be cheesy, but my goal has always been to find happiness. But the things that bring me happiness now are different. Before I started Health-Ade, I had something to prove. Maybe three years after starting Health-Ade, I felt like I’d done that — I’d proven I could take $600 and make a legit company. Now, it’s about feeding all my buckets. I’m a big believer in defining how you want to be remembered when you’re 80. What is the legacy you want to leave? Nobody wants to be remembered just for being a great boss, or being really good at their career; they’ll say I have this other bucket I care a lot about. Maybe it’s creative, or musical, or a spiritual bucket. Maybe it’s family. For me, I have my buckets that I’ve defined, and my motivation now is to make sure I’m feeding all of those. At 28, I had to prove to the world that I could do it. Now, I want to fill all those buckets that I care about, and start building my legacy.

More like this
An Open Letter To The Person Who Bought Steve Jobs’ Birkenstocks For $218,000
By Ginny Hogan
8 Money Saving Experts To Follow For Accessible Advice
By Maxine Harrison
These Are The 3 Most Mellow Zodiac Signs
By Kristine Fellizar
20 Christmas Movie Quotes That'll Get You In The Holiday Spirit
By Alexis Morillo
Get Even More From Bustle — Sign Up For The Newsletter