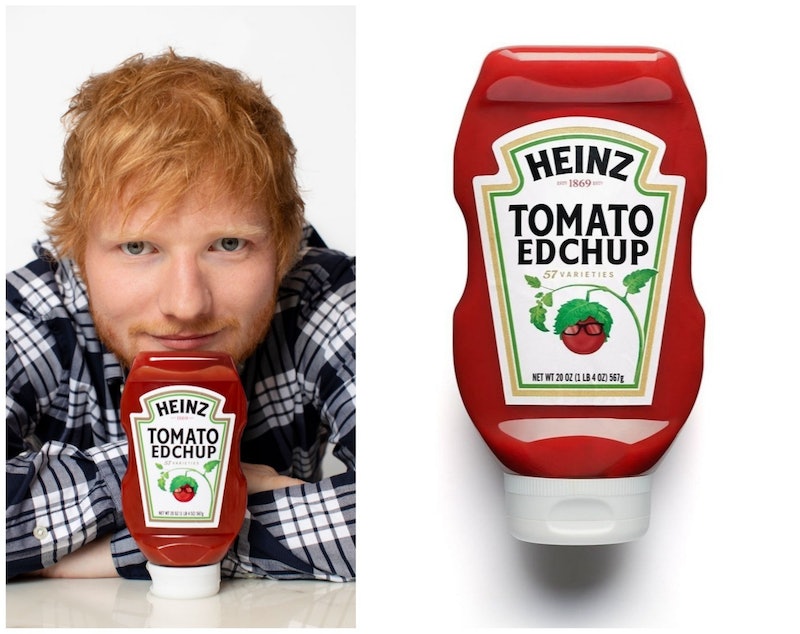 Ed Sheeran loves ketchup. Like, he really, really loves ketchup. In fact, he loves it so much that one might argue a collaboration between Sheeran and one of the world’s most notable ketchup brands was inevitable — and now, it’s finally happened: Ed Sheeran and Heinz have made “Edchup” a reality just in time for National Ketchup Day. Is it just regular Heinz ketchup in a shiny new bottle? Of course. But is that bottle spectacular? Yes. Yes, it is. And hey, guess what? You can actually buy a bottle of Edchup for your very own right now, thanks to the wonders of online shopping. Sometimes the internet is awful — but sometimes, it is a glorious, glorious place. This is one of those times.

Sheeran and Heinz both took to Instagram on Wednesday to announce the collaboration in honor of National Ketchup Day, each with some unique images depicting Sheeran with his beloved bottle of Edchup. “It's actually real and you’ll be able to get your hands on one very soon,” wrote Sheeran in the caption of his own post, which features an image of the “Shape of You” singer literally kissing a Heinz bottle and the hashtag #TheDreamThatKeepsOnGiving; meanwhile, wrote Heinz, “EdChup It’s here. It’s Perfect” (I see what you did there, Heinz), including alongside the message two photos of its own — one of just the bottle, and another of Sheeran posed behind it.

Heinz’s post also featured instructions on how to get your hands on your very own bottle of Edchup — namely, click the link currently featured in the brand’s bio on their main Instagram page and go forth. For the curious, the link is heinzedchup.com, because of course it is.

The ketchup is the same Heinz ketchup the world has known and loved for well over a century (fun fact: Heinz began manufacturing its beloved ketchup in 1876) — but the big draw here is the bottle and its brand new label. The design takes all its cues from the classic Heinz Tomato Ketchup label, but replaces the word “Ketchup” with “Edchup” and swaps out the regular tomato in the logo for one that looks an awful lot like Sheeran himself, complete with big hipster eyeglasses. Bottles can be purchased at heinzedchup.com for the low, low price of $5 a pop, plus an additional $2.50 for shipping; note, though, that sales are only open to U.S. residents, with each order being limited to five bottles.

But although the collaboration makes sense simply based on Sheeran’s own love of ketchup — he even has a tattoo of the Heinz Tomato Ketchup logo, for goodness’ sake — it’s actually been in the works for a few months now. Back in April, Sheeran posted a photo of himself posing with a bottle of Heinz ketchup to Instagram along with the message, “Yo @heinz I have an idea for a TV ad if you wanna do one.” Continued the artist, “If not I won’t be offended, I could never be mad at you. Slide in my DMs or have your people call my people. Lots of love, your biggest fan x.”

Heinz, it seems, took him up on his offer; roughly a month later, Sheeran posted another image of himself in front of a computer displaying an image of an “Ed Sheeran X Heinz” logo with the caption, “It’s happening…” Heinz reposted the image as well, captioning it, “When your biggest superfan, who happens to be international superstar @teddysphotos, tells you he wants to work with you... MAKE. IT. HAPPEN. Stay tuned for what's coming next.”

And, well — today we found out what comes next: An actual bottle of Edchup. I guess the moral of the story here is, “Never say never.” Or maybe “Ask and ye shall receive.” Or maybe “Become an international superstar and your wildest dreams will all come true.” Or… something.

But although sales of Edchup seem mostly to be limited online, a post featuring a bottle of Edchup appeared on the r/mildlyinteresting subreddit on June 4 — a day before the collaboration actually debuted on Heinz’s and Sheeran’s official channels. “My parents got some delicious Edchup,” wrote Redditor u/Asmoreus, who posted the photo. There’s no information about where u/Asmoreus’ parents actually found the bottle, but given that one of the rules of the subreddit is that all images posted must be original photographs, it’s relatively safe to say that the image is genuine.

Bottles of Heinz Tomato Edchup are only available while supplies last, so you’ll have to jump on it pretty quickly if you want one of your own; you can buy them here. Good luck, my friends. May the condiment deities always smile upon you. And maybe serenade you with a rendition of “Perfect.”

More like this
TikTok's Butter Board Might Be The New Cheese Plate
By Emma Carey
On TikTok, Tinned Fish Date Night Is The Latest Viral Food Obsession
By Emma Carey
Why TikTok Is Flooded With Controversial Videos About "Pick Me Girls"
By Courtney Young
This TikTok Song About An Unrequited Romance Has FYPs In Shambles
By Emma Carey
Get Even More From Bustle — Sign Up For The Newsletter