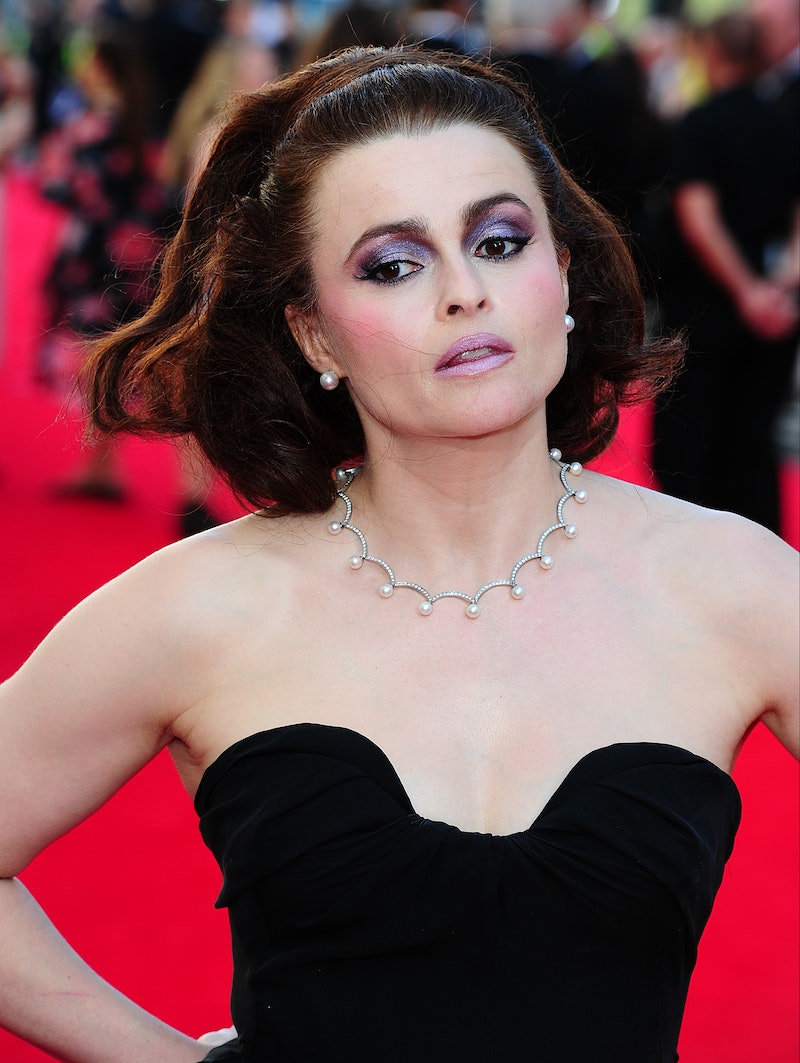 Long before Season 3 of The Crown premiered on Netflix, the actor behind Princess Margaret tried to form a familial connection with the Royals. During a recent appearance on Watch What Happens Live, Helena Bonham Carter revealed she once asked Prince William to be her daughter's godfather. The request came when she met the Duke of Cambridge while staying in Mustique in the Caribbean years ago — and, yes, she was a few drinks in.

"I wasn't that drunk, but enough drunk for me not to drink anymore," Carter explained, noting that William was also in a "jolly" mood during the night out with the royal. As the actor recounted, her not-so sober request came out of a desire to make things fair between her two children — Billy, now 16, and Nell, now 11 — with ex-partner Tim Burton. "Thing is, I'd spent all my friends as godparents on my first child, so Billy had 11 godparents," Carter told host Andy Cohen. "So, I thought I could make up for Nell, you know who suddenly came along and we didn't have any left. I thought, 'Well, if I give her Prince William that would cover,' you know?"

Unfortunately for Nell, William turned down the offer, though Carter said he had a very "funny" reaction to her question. "He just said, 'You don't want me to be godfather to your child,'" she said with a laugh. "And I left. I mean obviously, it didn't work out."

This isn't the first time that Carter has told the story of Nell's almost-godfather. In 2014, the actor told The Independent that she was "very drunk" when she asked Prince William to be the godfather, and that he "quite wisely said no." Still, there are no hard feelings between Carter and William, as she told the British outlet, "I admire [William]. He has got the same grace as both his parents."

Prince William has apparently had many awkward interactions with members of The Crown's cast. Carter's co star, Olivia Colman, revealed in early November that her own meeting with William "didn't go well." Colman recounted the story during an appearance on The Graham Norton Show, noting an awkward moment when William asked her what she was working on. "He quickly added, 'Actually, I know what you’re doing,'" Colman recalled, referencing the fact that she had taken over the role of Queen Elizabeth from Claire Foy. "I was so excited and asked, ‘Have you watched it?'" His answer was apparently a strong "no," which left the Oscar winner feeling "awkward." Though perhaps hearing about how her co-star drunkenly asked the royal to be godfather to her daughter will take some of that sting away.

More like this
Meet Kelly Fisher, Dodi Fayed’s Ex-Fiancée
By Karen Fratti
What Was Really In Princess Diana & Prince Charles’ Divorce Settlement
By Karen Fratti
The One Detail From The Tampongate Scandal That The Crown Missed
By Karen Fratti
Everything To Know About 'Elite' Season 7
By Jake Viswanath
Get Even More From Bustle — Sign Up For The Newsletter