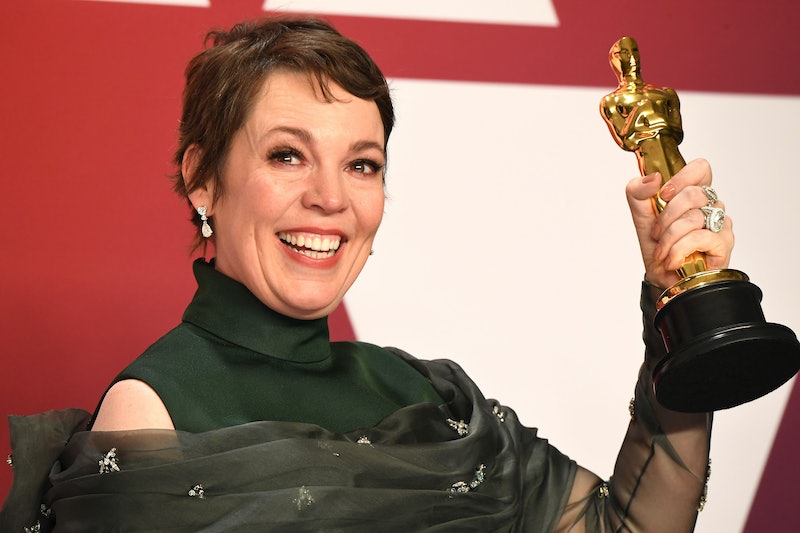 It seems like everyone is excited to see the new Queen Elizabeth take the throne in Season 3 of The Crown — everyone, that is, except the real queen's grandson. During a recent appearance on The Graham Norton Show, Olivia Colman recalled an "awkward" meeting with Prince William, after the Oscar winner asked the royal if he had ever watched the Netflix series based on his family. Colman and her husband met the Duke of Cambridge at a recent reception at Buckingham Palace, though she joked to host Graham Norton that her conversation with him "didn't go well."

"He asked what I was doing at the moment before he quickly added, 'Actually, I know what you’re doing,'" Colman recalled, referencing the fact that she has taken over the role of Queen Elizabeth on The Crown from Claire Foy. "I was so excited and asked, ‘Have you watched it?'" she continued. However, the Oscar winner's hopes were shattered when Prince William answered with "a very firm 'no,'" leaving her feeling very "awkward," despite the fact that she felt the duke was "very charming and very lovely."

Colman had previously described her awkward interaction with Prince William in an October interview with The Sunday Times, telling the outlet, "I was very uncool, and he was charming. He has that thing where he makes you feel you’re the most exciting person in the room." In that same interview, Colman also revealed that her husband, actor and writer Ed Sinclair, stole some "[toilet] roll" from the reception in question, "just to say we got it from Buckingham Palace."

Colman's "uncool" conversation with Prince William is far from her first interaction with a member of the British Royal Family; in August, the actor told Entertainment Weekly that she had "accidentally" met Queen Elizabeth while attending an event for the British Film Institute. "We suddenly found ourselves, 200 people, in a big queue. I thought maybe we were going in to have some food," Colman recalled. "I hadn't read the order of the day. [I] looked around the corner, and there was the Queen and Prince Philip, and went, 'Oh! Oh no! I don’t know what to do!'"

She continued, "A gentleman with epaulettes said, 'Don’t overdo it, little bow, and you say, Your Majesty, and Your Royal Highness, and go. Make it as swift as possible and go'. I managed to remember what to say, sort of sticky-handed and bit sort of stumbly. That was it!" On Halloween, Colman met her third member of the Royal Family, when Princess Anne — who will be played by Erin Doherty in the Netflix series — made her a Commander of the Most Excellent Order of the British Empire (CBE) officer for her services to drama.

Colman's Crown costar, Helena Bonham Carter, also recounted on The Graham Norton Show that she has had a memorable encounter of her own with a member of the Royal Family: during a visit to a psychic, Carter spoke with the ghost of Princess Margaret, who she plays on the Netflix show. Though she explained to Norton that she "actually went to see a friend about something else, but she has a talent for mediumship," and Margaret appeared, Carter told The Guardian in October that she earned the late princess' approval.

"[Margaret] said, apparently, she was glad it was me," the actor told the outlet at the time. "My main thing when you play someone who is real, you kind of want their blessing because you have a responsibility. So I asked her: 'Are you OK with me playing you?' and she said: 'You’re better than the other actress' … that they were thinking of [for the part]."

After so many memorable meetings with the British Royal Family, it seems like Colman and Carter will have plenty to draw on when it comes to portraying Queen Elizabeth and Princess Margaret. Season 3 of The Crown will premiere on Netflix on Nov. 17.